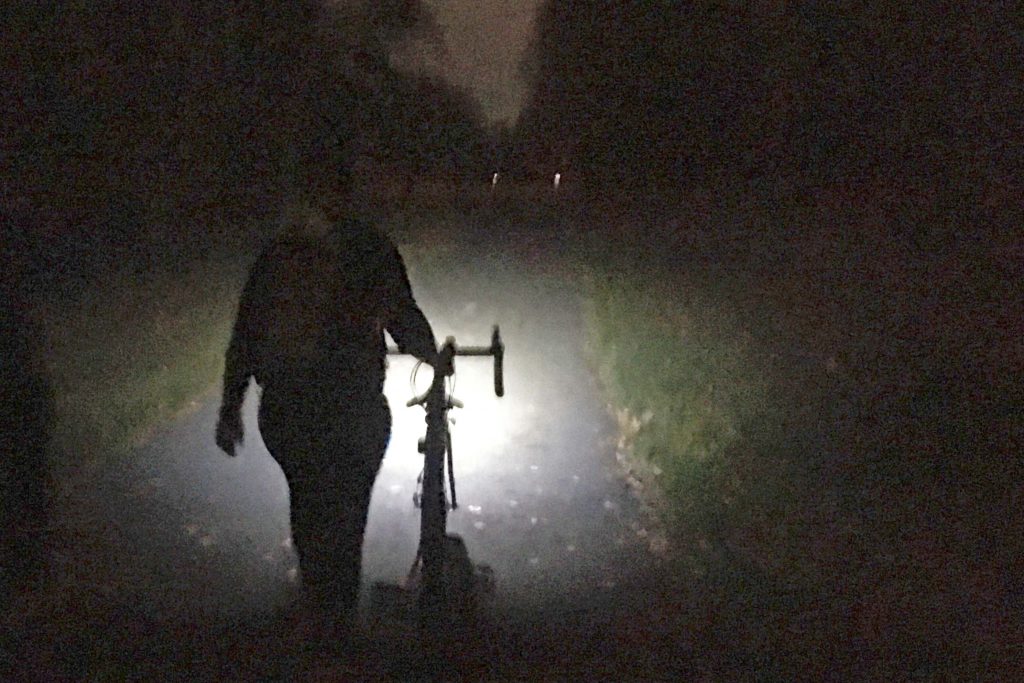 University of Maryland graduate students marched through the darkness on Paint Branch Trail, protesting an apartment complex's decision to cancel a bus route that transported them to campus. (Angela Roberts/For The Diamondback)

A beam of light from a bike lamp cut through the darkness of Paint Branch Trail as the crew marched — and sometimes stumbled — along, their voices echoing in the quiet night.

“This just isn’t right,” Martin Sanders said, glancing back at the group walking behind him. “It’s not right.”

He periodically whipped his cell phone out to record the largely unlit path, which winds its way from the University of Maryland to Seven Springs Apartments — about three miles away.

“Look at this,” Sanders exclaimed, pointing his phone’s camera in front of him. ”Ross Management, this is what you’re asking graduate students to do.”

To flag safety issues along the trail and call out the company that oversees Seven Springs for unscrupulous business practices, the Graduate Student Government organized a walk from campus to the apartment complex Friday night. Their goal, explained Sanders, the group’s legislative affairs vice president, was to drive Ross Management “back to the negotiating table.”

Late in the summer, after many residents had already signed or renewed their leases, the apartment’s management announced it was cancelling its participation with Shuttle-UM’s #110 Seven Springs route, citing the rising costs to host a stop at its complex.

To cushion the blow to residents — many of whom are graduate students — the apartment’s management company provided them with Metro cards to fund their commute on WMATA’s #83 College Park route, which stops at Seven Springs and along Baltimore Avenue and costs $2 to ride. But next semester, Ross Management plans to stop giving out Metro cards.

This will leave some students with few choices other than to hike or bike the three miles it takes to get to campus on the Paint Branch Trail, said governmental affairs vice president Rachel Lamb. They could take an Uber, pay for the Metro themselves or buy a parking permit if they own a car, but she said those costs could quickly stack up for people who are already financially strained.

“You shouldn’t have to be forced to walk in unsafe conditions for an hour to and from campus just because you can’t afford to take other alternatives,” she said.

So, Sanders said, the GSG is calling for Ross Management to either continue providing Metro cards to residents through the spring semester or reinstate the shuttle service from December through the end of June.

Ross Management didn’t respond to an emailed request for comment. However, in the past, its vice president for residential management operations has described the Metro cards as an “immediate short-term solution,” and has advised students with concerns about safety on Paint Branch Trail to contact Prince George’s County.

The vice president also wrote that Seven Springs is not in a financial position to subsidize a shuttle “based on the current ridership participation of Seven Springs’ residents and the current disproportionate costs passed on by UMD.” This year, it would have cost Seven Springs $107,000 to host a shuttle stop — a $4,000 increase from last year.

After Seven Springs cancelled its partnership with Shuttle-UM, the Department of Transportation Services announced it would eliminate the #110 route. It increased the number of buses running the #127 Mazza GrandMarc route — which hits the same stops along Rhode Island Avenue and Edgewood Road that were previously served by the #110 — but the closest stop is about a mile from Seven Springs.

In a statement sent by a university spokesperson, DOTS recognized the students’ concerns, adding that it “remains willing to work with all parties involved, including the GSG, in determining a transit solution.”

The gang — six GSG members and two graduate students — started its hike Friday at Stamp Student Union around 8 p.m. One of the marchers, a public health science graduate student named Marque Long, came along even though he doesn’t live at Seven Springs and wasn’t affected by the shuttle’s cancellation. He joined the walk to support the apartment’s residents, he said, who had thought they would have access to a free shuttle service when they moved to the complex.

Entering Paint Branch Trail behind the Computer Science Instructional Center, the group’s walk was at first illuminated by street lamps that stretched along the path. But the lights dropped off after about half a mile.

“It looks like a dark hole!” Lamb exclaimed, as the crew walked past the last of the lamps and stared down the unlit path.

“This is my trusty steed,” she joked.

Curran lives in the Hollywood neighborhood, which was previously served by the now-cancelled #110 route. Now, the #127 bus stops along her street, but it only takes her as far as Regents Drive. The #110 used to stop on the west side of campus, she said, which is where most of her classes are.

Most of Curran’s classes are after 4 p.m., when parking is free in some lots, so she typically drives to campus — and if she has to show up before then, she bikes. On days that she has her car, Curran drops classmates off at Seven Springs so they don’t have to walk home.

“Seriously, could you imagine walking this at night?” Curran asked the crew. “I’m scared, and I’m with a group.”

Near the end of the hike, the group took a wrong turn, and wound up at the Mazza GrandMarc apartments. They decided to cut their march short rather than continue the extra mile to Seven Springs.

They groaned and laughed when they saw what sat in the GrandMarc’s parking lot.

There, its tail lights blinking in the darkness, was the Shuttle-UM.