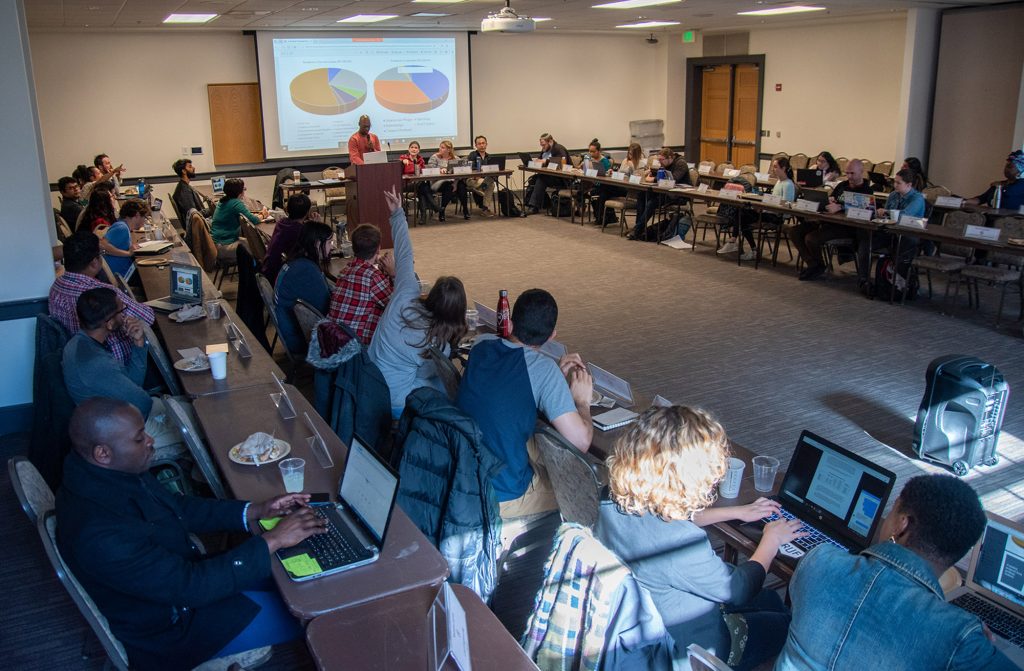 The Graduate Student Government at its Nov. 4 meeting. After its Jan. 27 meeting, representatives from the body met with Christian Cerria, the development director of the Gilbane Development Company, to discuss plans for housing aimed at graduate students. (Joe Ryan/The Diamondback)

The University of Maryland’s Graduate Student Government discussed whether the athletics department should adopt an opt-in model for its graduate student fee on Monday, circling back to the topic almost exactly one year after first pushing for a change.

In November 2018, the GSG voted overwhelmingly in support of a resolution that called for the university’s athletics department to allow graduate students to forego paying the portion of the fee that goes toward funding student tickets — three-quarters of the then-$136 yearly charge.

The resolution was put forward during the heat of the fallout from the death of offensive lineman Jordan McNair and the release of a report detailing pervasive abuse in the school’s football program. Back then, representatives who spoke in favor of the action were mainly concerned that they were being required to financially support a football program that didn’t reflect their values.

Now, the crux of one executive’s argument revolved around two items of discussion. Financial affairs vice president Xu Han pointed out this university is the only one in the Big Ten to require graduate students to support their school’s athletics department through the payment of a student fee and contended that few graduate students regularly attend sporting events.

“That’s why we have the modest proposal that we should make the athletics fee for graduate students optional: because it’s the right thing to do, and it’s feasible to do in the upcoming year,” Han said.

This time around, the GSG is also hoping to push for the entire athletics student fee to be opt-in.

This year, graduate students are required to pay $66.50 per semester. For students taking nine or more credits over two semesters, the cost that accumulates could pay for 18 meals at the diner or 66 trips on the metro bus, Han said.

Han also asked the representatives in attendance if they had gone to at least two athletic events this semester. Only a handful of the 30 graduate students raised their hands.

A spokesperson for the graduate school confirmed this university is the only Big Ten institution with a “mandatory graduate student fee for intercollegiate athletics.” She added that Steve Fetter, the school’s dean, is for establishing an opt-in model and allowing graduate students to purchase ticket packages on their own.

In 2018, the Student Government Association and the Residence Hall Association also called for the implementation of an opt-in model. But GSG president Annie Rappeport said the groups were never able to generate the traction needed to push the change forward. That’s why it was important to revive the debate at Monday’s assembly meeting, Rappeport said: to make sure it stays fresh in everyone’s minds.

“We don’t want people to forget what we’ve worked on,” she said. “Because that’s kind of what happens, and then things are even slower to change, if change at all.”

Han also argued the athletics department could afford the proposed change. Last year, according to data released by the U.S. Education Department, the department brought in over $98 million in total revenue — less than one percent of which was from the graduate student athletics fee, Han said.

Communication representative Shawna Dias added the athletics department isn’t even using all of its revenue. Last year, the Education Department listed the department’s total expenditures as around $6 million less than its total revenue.

So, Dias said, it seems that a third of the revenue-expenses gap went toward bolstering the salaries of coaches. Last year, according to the Education Department, head coaches on men’s athletics teams made an average of $819,096 for coaching duties only.

Rappeport was encouraged by alternatives to the opt-in model representatives brought up during discussion. Chemistry representative Laura McBride, for instance, pitched changing the structure to an opt-out fee — one that would require graduate students to take certain steps before they were allowed to stop paying the fee.

This model would likely bring in more money to the athletics department than one that’s opt-in, and the university might be more likely to implement it, she said.

But Anna Posbergh, the group’s representative on the Athletics Council, wasn’t as optimistic. When the university made the switch from the ACC to the Big Ten, Posbergh argued that it failed to account for the costs of running with the big dogs. Now, this university is up against schools that have larger athletics budgets and has to fight to remain competitive.

“The athletics department isn’t going to get rid of the student fee, because they need to keep up with the Big Ten,” she said. “But perhaps there are alternative ways to bring that in, and I think that’s what we need to think about.”