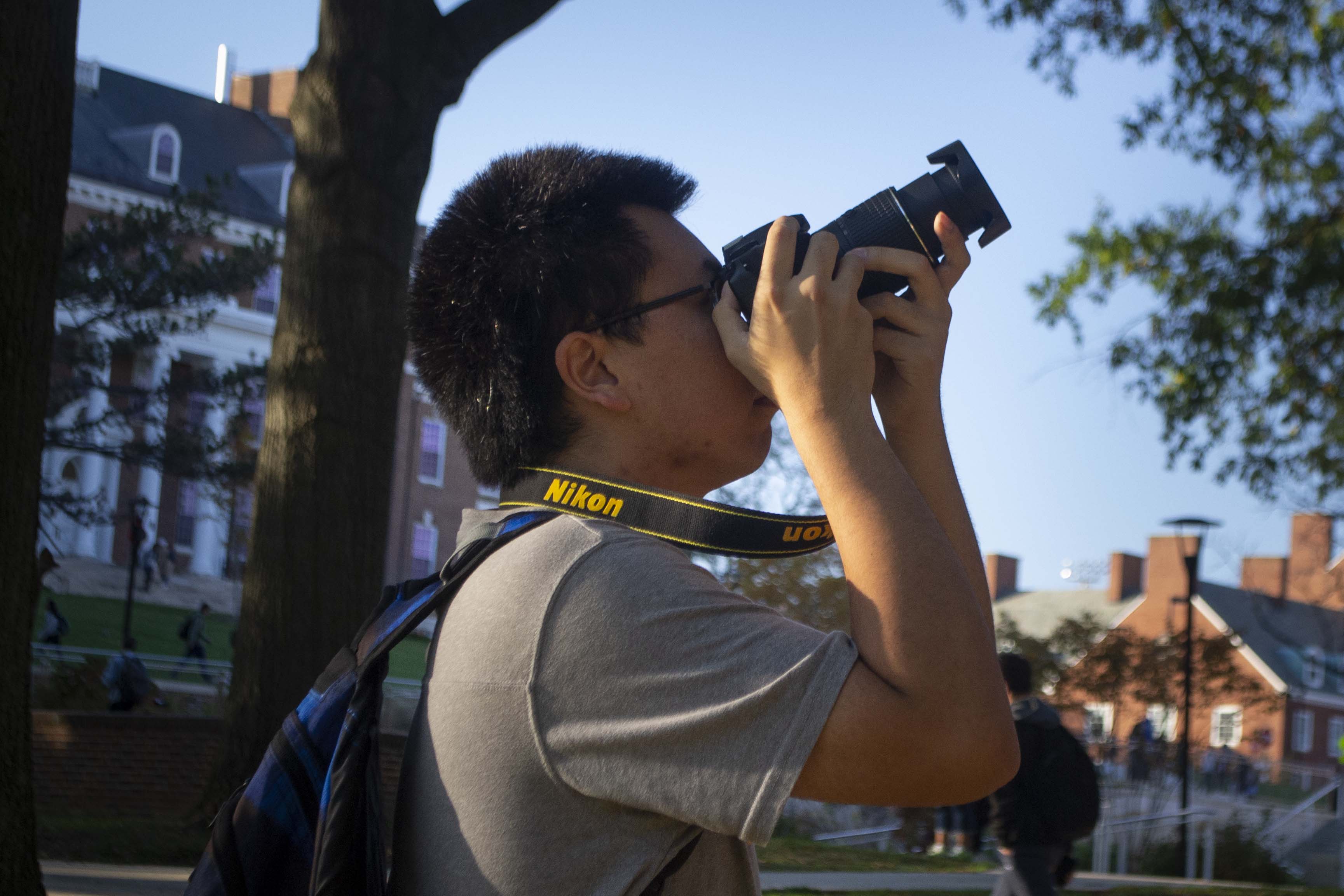 Spencer Lin is a sophomore psychology major at the University of Maryland. He works with Scholars in Action, a service organization on campus, and likes to take photographs in his spare time.

He also happens to run an Instagram account with more than 300 followers documenting squirrel sightings around this campus.

The account, @umd_squirrels_, showcases Lin’s original photographs of the furry denizens as well as submissions from others on the account’s story.

“The squirrels here and near metropolitan areas are more friendly, so you can get nicer pictures of them since they don’t run away,” Lin said. “Plus, the school setting lets them do random stuff like eating out of the trash cans, or half a fry, or fried chicken in their hands.”

[Read more: In defense of walking around campus in silence]

As I followed the student photographer one afternoon, it was hard not to notice how prevalent squirrels are on the campus. Lin even has a video of a Maryland squirrel eating a chicken wing.

Who doesn't love wings? (Sound On)

Dozens of students walk around in the middle of the day. Some are hurrying to class, others walking to their cars. And yet, squirrels still scamper between the trees, through the grass and on the walking paths.

Lin said his most consistent sighting is a black squirrel with red markings on its tail by the parking lot near Francis Scott Key Hall.

Good luck on the finals!

Some get closer to people than others, but Lin assumes the squirrels are probably just used to the commotion.

As we walked around the Skinner Building, his favorite spot for taking pictures, two squirrels dashed across the sidewalk chasing each other. Two girls screamed, and Lin crouched onto his knees and took the shot. But the shaded area was too dark for a quality photo.

“Sometimes you see something interesting happening, but you can’t really capture it because they move so fast,” Lin said.

We lingered by the building for a while longer as Lin scouted potential backdrops, good lighting and a suitable rodent subject.

He locked on to one, but a woman walking a large dog frightened the dark gray critter, and it scurried up a tree onto an overlooking branch. Finally, the good elevation he desired.

“Don’t come down!” he yelled with a laugh.

Squirrels are not always the most cooperative models. Lin had a staredown with a skinny black squirrel in front of the Edward St. John Learning and Teaching Center. The soft afternoon light hit the left side of the tree perfectly, and he waited in his position for a moment, moving his lens in lockstep with the squirrel until it ran away.

“Sometimes I’ve sat there and waited for a good five minutes for them to do something interesting,” Lin said.

Lookin majestic (and wishing you a great first week of classes)

Lin said he has learned a lot about squirrels’ behavior from taking their pictures. He has a trick he sometimes uses to get them to look at him.

“If you hold your hand up, they’ll think you have snacks,” Lin said. He held his arm out and upturned his palm, closing his hand slightly as if he was holding something.

Lin puts a lot of consideration into his pictures. He said he always thinks about principles of photography when he takes his photos: foreground, middle ground, background, lighting and texture. He also rarely retouches them except to sharpen photos blurred from the squirrels’ fast movement.

“Ideally, I don’t want to edit my pictures,” Lin said.

He credits his high school photography teacher for instilling in him the philosophy that the best photos require the least amount of editing.

The page has drawn a bit of a cult following in the campus community. Lin said even @cat_on_shoulder_, an account run by a cat owner who walks his pet around campus on a leash, has interacted with his page.

Karenna Foley, a freshman psychology major and fan of the page, likes that Lin encourages others to take their own squirrel pictures and share them.

“I think the page is absolutely adorable,” Foley said. “A super wholesome way of documenting the campus and its little rodent residents.”

Jared Gill, a senior computer science major and self-described “huge squirrel fan,” saves the pictures Lin posts of his submissions on the page’s story. Gill has been featured twice so far.