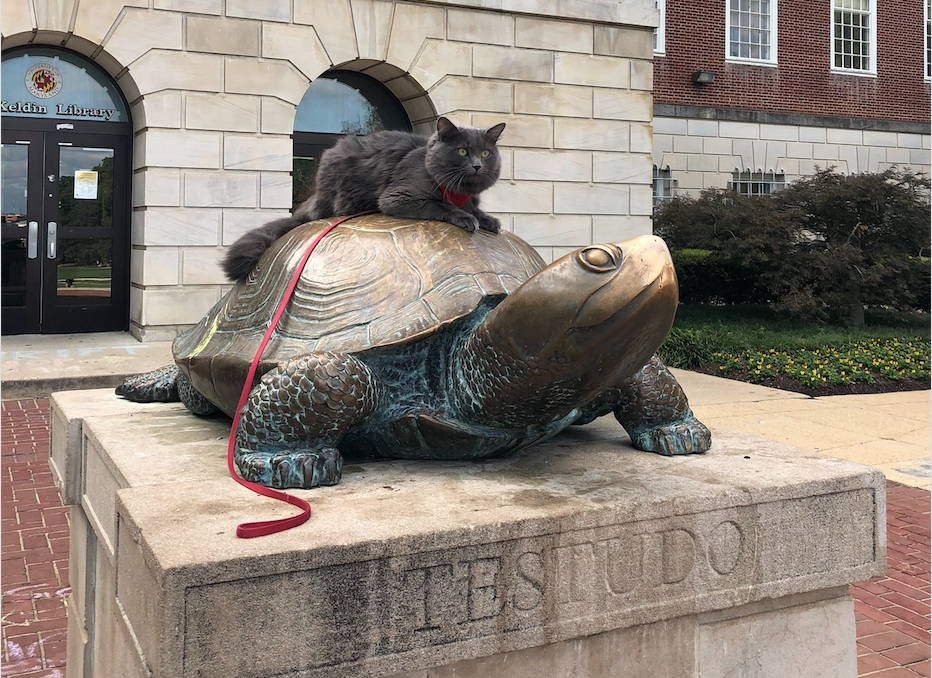 Walking by McKeldin Library, you might not see him at first. Or, rather, them. Casually perched on a bench, or strolling by the brick awning that sits before the sprawling mall, you’ll see Sam Booker, and right beside him, Hyper. One, a quiet 21-year-old from Howard County. The other, a 1-year-old, fluffy gray cat donning a red harness and leash. Sam’s usually holding the leash.

This image is striking in both how unusual yet comically nonchalant it is integrated into the University of Maryland environment. Seeing it’ll probably boost your mood, or at the very least, make you smile. Sam, Hyper’s owner, more commonly known as the ‘guy with the cat on his shoulder’ has seemingly earned a slot among other campus legends like High5 Guy and Brian the Pan Flute guy: the kind of characters that might catch your attention on your walk to class who fit right in to the bustling, slightly chaotic energy of this university’s most high-traffic areas.

The story of Sam and Hyper is one that is so straightforward that it perfectly lends itself to the somewhat absurd nature of a man and a leashed cat. About last September, Sam’s friend had a sister whose cat had just given birth to a litter of kittens.

While at their house, Sam talked about the kittens, and how he just wanted to spend the night with them. His friend’s sister offered him the chance to adopt one of them. After a quick text message exchange with his mother, it was decided.

When asked how he chose Hyper, he chuckled and stroked Hyper’s ear with the handle of the red leash, something he seems to do often.

“I don’t know really … I can’t remember why, but he just ended up being the one.”

The name, of course, comes from the cat’s demeanor. He is extremely curious and outgoing, and very energetic. He can hardly sit still as Sam and I chat.

In the spring semester a few months later, when Hyper was still a kitten, Booker decided to bring him to the campus as a sort of social experiment.

“I guess I just wanted to see how people would react to it,” Booker said.

As we sit next to the Testudo statue in the balmy October weather, there are a few solid observations I can make. Firstly, if taking note of the sociological impact of having a cat on a college campus was the main motivation for this, it was a smashing success.

In the short time we sat together, they receive a bevvy of reactions. People stare, have double takes, take photos and frequently express disbelief — “it’s a fucking cat” someone remarks to their friend as they walk by.

“I’m used to it now, but I forget that it’s not normal sometimes,” Booker said.

After enjoying the chance to pet (with permission!) a soft and seemingly confident cat — I swear, Hyper has this aloof air that makes him seem more unbelievable as he saunters around campus — the next line of logical thinking would be, why?

Sam lives nearby, about a 30-minute drive from College Park. But he doesn’t attend this university and doesn’t know many people on the campus. To that, Sam doesn’t seem to have a solid answer, or much interest in explaining himself on a deeper level.

Put simply, “It’s just a nice place to hang out, walk around and meet people.”

Despite neither of them being enrolled here, Sam and Hyper are arguably a part of this university’s culture, with their Instagram account @cat_on_shoulder having nearly 1,200 followers and each post of Hyper’s antics receiving hundreds of likes. Sam says that he is constantly being stopped for photos, petting opportunities and people just wanting to know more about the guy with the cat on a leash, or perched on his shoulder.

Oh and the shoulder thing — how the hell did he train a cat to jump up onto his shoulder on command? Though his Instagram bio says ‘cat trainer,’ Sam insists he isn’t a professional, and that his impressive feats are self taught.

Sam isn’t quite sure what their future will be on campus, and at this point in the interview, Hyper has casually perched himself onto my thigh and fallen asleep in an upright position. A few beats pass, and then Sam realizes there is one thing he’d like.

“Actually, I want a statue of Hyper on campus,” Booker said. “Then it’d be cool because I could put him next to it, and they’d both be still.”