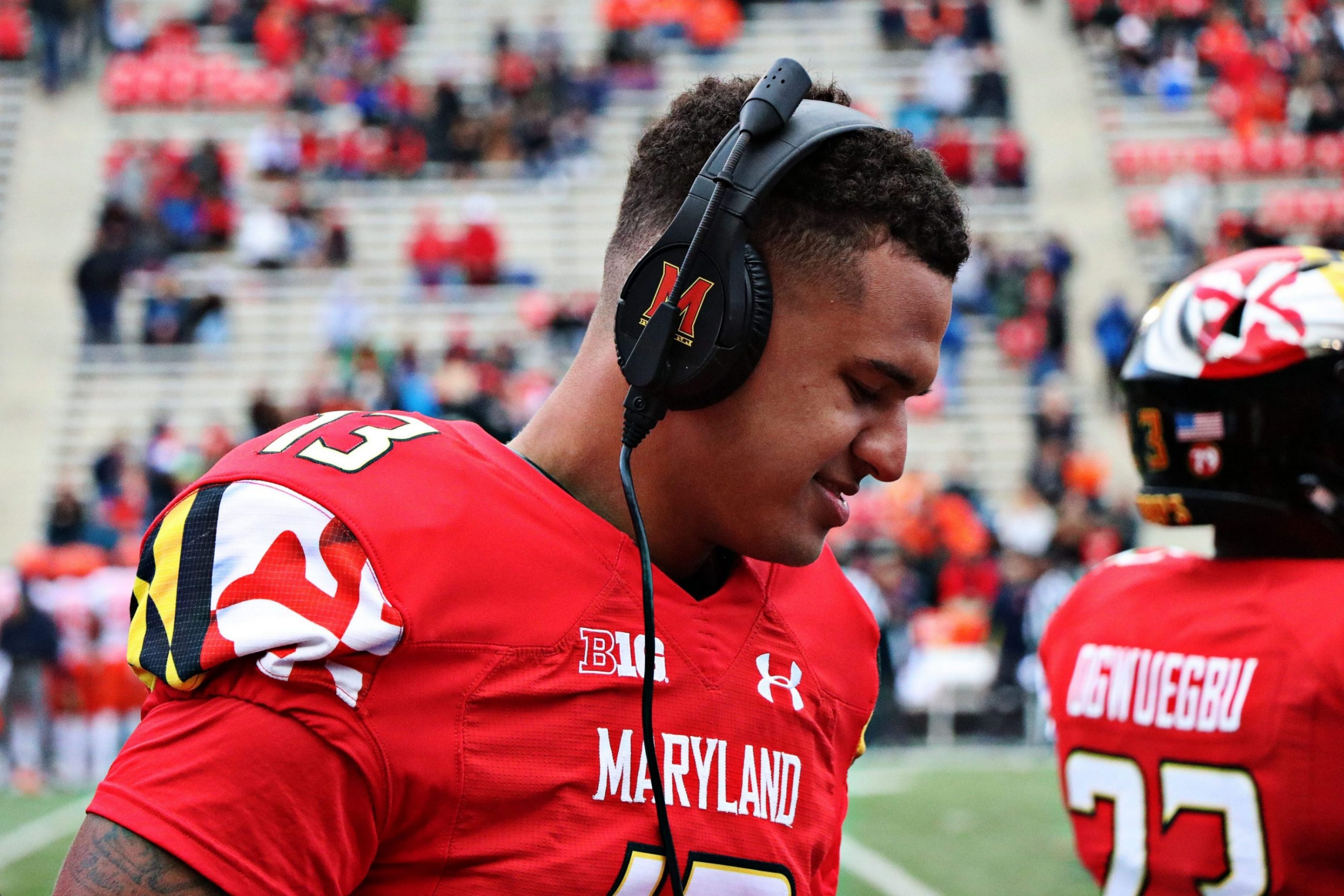 Tyler DeSue was fulfilling his third-string quarterback duties admirably, playing catch on the sideline with Josh Jackson to help the man above him on the depth chart stay warm.

And when DeSue saw Tyrrell Pigrome — the backup-turned-starter after Jackson’s ankle injury three weeks earlier — go down with a hyperextended knee in the second quarter Saturday, he told Jackson to be ready. Surely, he thought, the graduate transfer would be the one to enter against Minnesota.

But after three quick conversations — a vote of confidence from graduate assistant Nick Cochran, a word from coach Mike Locksley and a call to offensive coordinator Scottie Montgomery in the box upstairs — it was DeSue wearing the helmet, DeSue breaking the huddle and DeSue clapping his hands for the snap.

It was DeSue, despite practicing with the scout team throughout the week, who wound up playing the better part of three quarters against the Golden Gophers. For him, the opportunity to lead the offense was as shocking as it was exhilarating.

But with Maryland football, which is known for a checkered quarterbacking history, DeSue can’t afford to allow a third-string label to manifest into a lackadaisical approach. Saturday proved why.

Locksley’s message reined that back in: “Just take care of the ball.”

DeSue produced a bit of both Saturday, finishing 4-for-12 with 88 yards, a touchdown and no turnovers. The redshirt freshman led the Terps to their only 10 points in a game well out of reach before his entrance. He orchestrated an eight-play, 41-yard drive that resulted in a field goal from Joseph Petrino before halftime.

DeSue completed his first two passes — a 10-yard strike to wide receiver Carlos Carriere on his first play before following that up with an eight-yard connection with wideout Dontay Demus. He was more miss than hit the rest of the way, but the early completions added confidence to a quarterback who hardly finds the field.

Before Saturday, DeSue had attempted one pass in 2019. He appeared sparingly in 2018, too. Saturday’s outing, despite featuring a string of five straight incompletions, was a positive step in DeSue’s development.

On a team in which injuries seem to plague the quarterback position with head-scratching frequency, DeSue’s spot on the depth chart has fluctuated. It makes even a third-stringer prepare for the potential of playing time.

First, Jackson’s high ankle sprain against Rutgers propelled Pigrome into the starting role and made DeSue the backup. And once Pigrome exited Saturday, Locksley decided Jackson — who had played three snaps and missed on two throws — wasn’t quite ready. So DeSue got the call.

And even before the relatively minor maladies this season’s quarterbacking group has faced, long-term injuries have affected Maryland’s gunslingers for years. In 2012, a linebacker was pressed into duty under center in an emergency situation. In 2017, Pigrome and Kasim Hill both tore their ACLs. With that history, playing three quarterbacks in one game doesn’t stick out as much.

“Got bad luck here?” Pigrome said with a laugh. “It is kind of weird. Like, I ain’t know nothing about it until I got here.”

A minor injury held Pigrome out of the spring game, too, and Jackson was still at Virginia Tech. That offered DeSue a chance to start, and he earned spring game MVP honors following his 23-for-35 day with 218 yards and two touchdowns.

He knows he can lead an offense, even if his chances are limited. Jackson and Pigrome both hope to be back in action this weekend against Michigan, likely relegating DeSue back down the depth chart.

So when his number was called Saturday, he ignored the scoreboard and instead focused on Minnesota’s defense. He found a mismatch in the fourth quarter, with tailback Tayon Fleet-Davis running a wheel route out of the backfield against a linebacker.

DeSue laid in a touch pass that resulted in a 59-yard touchdown, his first passing score in college. He ran the length of the field and was the first to reach Fleet-Davis in the endzone.

In retrospect, DeSue realizes throwing it long on third-and-5 might not have been his best decision. But then again, during an eventual 52-10 loss, DeSue hadn’t envisioned he’d get the chance to play at all. Cochran’s words before the 6-foot-1 quarterback entered the game stood out: “Go out there and sling it.”

The results weren’t always there, but that’s just what DeSue did.