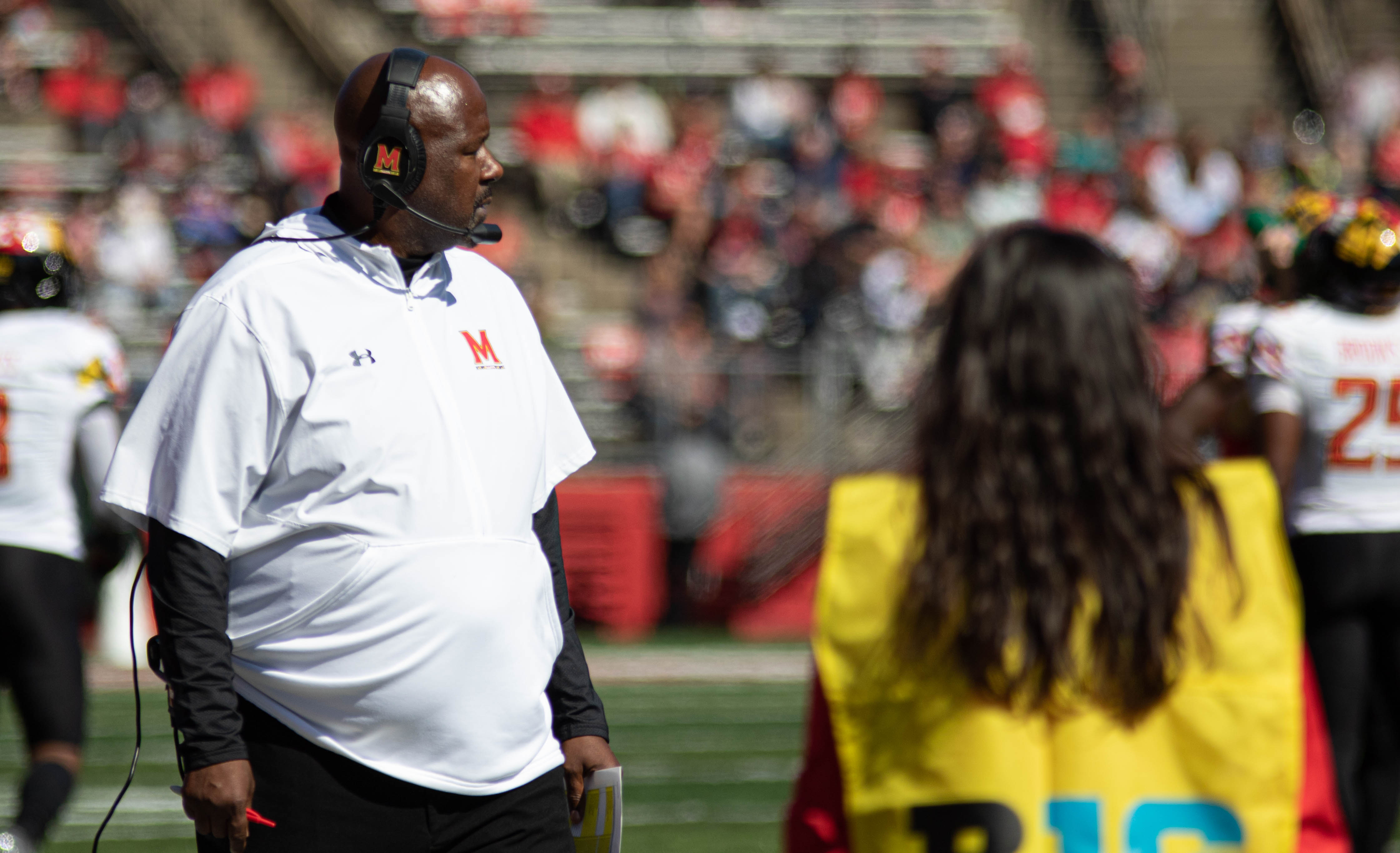 MINNEAPOLIS — As Maryland football coach Mike Locksley sat down atop the podium in the bowels of TCF Bank Stadium, the biggest issues of Saturday’s 52-10 demolition flooded back to him.

There were the two dropped passes turned into interceptions, a gargantuan possession time differential and an inability to stop Minnesota’s rushing attack. He thought about how the Golden Gophers were more physical, how they converted third downs and how they held the Terps to 13 second-half plays.

He was left bemused over Maryland’s quarterback situation, didn’t have answers for how one week his team showed fight and the next it seemed to fold, and circled back to matters of consistency — that is, how the Terps are thoroughly inconsistent.

“Every Saturday we go play is like Christmas for me,” Locksley said, expression somber, head shaking occasionally. “I have no idea what I’m getting until we get on the field. And that’s not a good place to be as a coach.”

[Read more: Defending Minnesota’s passing game will be “one hell of a test” for Maryland football]

It was one of those days for Maryland, ending in another blowout loss. And it’s been one of those seasons, too, with the defeat to No. 17 Minnesota (8-0, 5-0 Big Ten) driving home just how wide the gap stands between the Terps and the Big Ten’s top teams.

Saturday’s display was hardly out of the ordinary for Maryland (3-5, 1-4) this season under Locksley, whose career head coaching record falls to 6-36 with this lopsided loss. Last week against Indiana, two late turnovers squandered a chance to earn a come-from-behind win. There was the debacle in West Lafayette against Purdue, and another in College Park against Penn State.

And through it all, the only sort of consistency Maryland has managed to muster lies in less-than-desirable attributes: difficulties defending against the pass, crippling turnovers and ill-timed penalties.

“We didn’t do ourselves any favors,” offensive lineman Ellis McKennie said.

It began on Tyrrell Pigrome’s second passing attempt of the game, a throw to Dontay Demus on a slant route delivered on time and on target. The 6-foot-3 wideout let it slip through his hands, and the ball bounced to defensive back Antoine Winfield, who returned it 30 yards to the Terps’ 20-yard line.

Four plays later, quarterback Tanner Morgan looked to wideout Rashod Bateman, tossed up a jump ball to his 6-foot-2 target and wound up with seven points to capitalize on Demus’ miscue.

“Your best players should play at their best,” Locksley said of Demus. “He’s a receiver. He’s paid to make those catches. And he’s a guy who’s made a bunch of plays for us.”

For the third straight week, Maryland’s adversary scored on its first two possessions, with a Seth Green rush from a wildcat formation putting Minnesota ahead 14-0 before Morgan found Tyler Johnson for a 16-yard touchdown on his team’s next drive, beating safety Deon Jones on the slant route.

Minnesota doesn’t rely on the pass — Morgan entered averaging fewer than 22 attempts per game — and the team didn’t rely on it Saturday, either. But Morgan’s 12-of-21 day for 138 yards, two touchdowns and an interception was effective, supplementing running back Rodney Smith’s 103 yards on 17 carries.

The Golden Gophers racked up 321 yards on the ground, the most the Terps have allowed this year.

“We didn’t probably get as much penetration as we wanted, but we tried our best,” said cornerback Marcus Lewis, who intercepted Morgan on a deep ball. “We’re just going to try to put this one in our back pocket.”

Meanwhile, Demus’ second drop of the game proved costly once more. Late in the second quarter, Pigrome threw to Maryland’s de facto No. 1 target. The ball was slightly behind Demus, but the wideout got both hands on it before tipping it to cornerback Coney Durr, who ran 72 yards to the house to establish a 28-0 edge.

Pigrome, who left in the second quarter with an injury and was ruled out at halftime, has now thrown four pick-sixes in his career. Quarterback Josh Jackson appeared for one series — a three-and-out — as he works back from a high ankle sprain.

“My gut instincts was that he probably wasn’t as ready as he needs to be,” Locksley said. “I didn’t have the confidence that he was prepared, in terms of just my conversation with him.”

So when Pigrome departed, it was down to redshirt freshman Tyler DeSue. He helped lead the Terps to a field goal before halftime and finished 4-for-12 with 88 yards, including a 59-yard touchdown pass to running back Tayon Fleet-Davis.

But Saturday’s contest was far out of reach by that point. The final 30 minutes of action — filled with fireworks for scores and clock-chewing drives — offered little for the visiting team.

For the home squad, an undefeated unit that managed a touchdown drive lasting nearly eight minutes in the third quarter, Saturday went about as smoothly as it could. The Golden Gophers racked up 498 yards of offense, converted seven of their 11 third-down attempts and held Maryland to 210 total yards of offense, its second lowest output this year.

“It’s an elite feeling, to get in here with our teammates and celebrate together,” Morgan said. “This is what you live for.”

In the opposing locker room, though, there was a much different feeling.

“Minnesota does a better job of executing their stuff than we do on offense,” Locksley said. “And for me, being an offensive guy, that’s just really, really disappointing.”