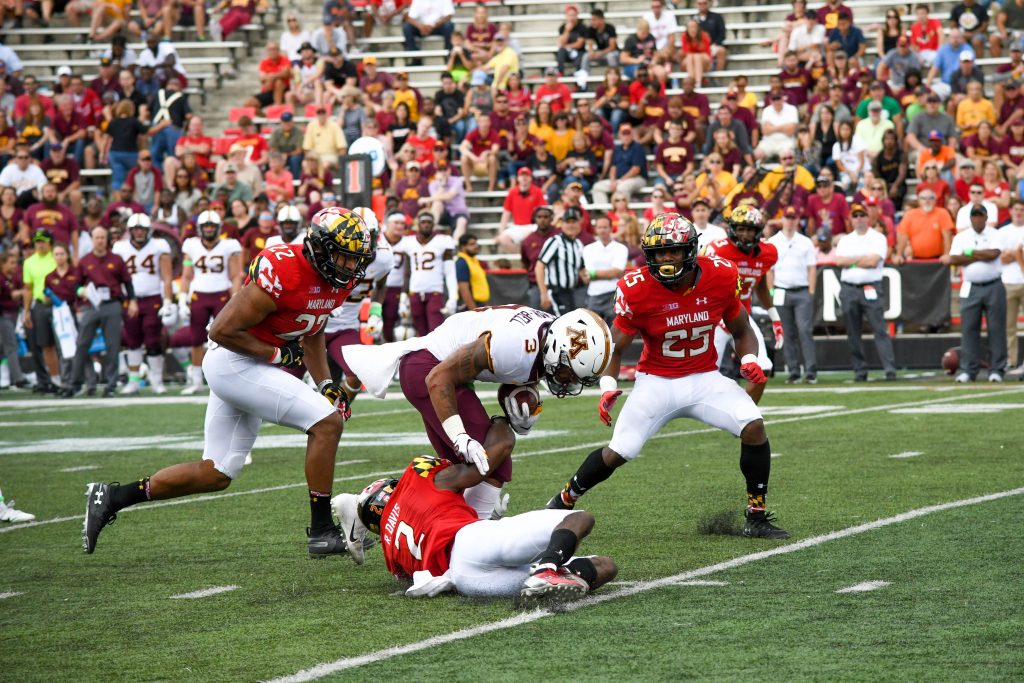 Defensive back Ravon Davis going in for a tackle during Maryland football’s 42-13 win over Minnesota at Maryland Stadium on Sept. 22, 2018. (Alex Chen/The Diamondback)

The first time Minnesota quarterback Tanner Morgan attempted to find Rashod Bateman in the corner of the end zone in last week’s 42-7 clobbering of Rutgers, Morgan’s effort pulled his wide receiver out of bounds.

But in the Golden Gophers’ case, with talented wide receivers lined up all over the field, one missed attempt doesn’t nullify the opportunity — or even change the play call. Instead, Morgan dropped back to pass once more, looked left the entire time, waited for Bateman’s cut toward the sideline and fired a 13-yard strike for Bateman’s fifth touchdown reception this year.

On a team as well-rounded as Minnesota, which is 7-0 entering Saturday’s matchup with Maryland football, there’s no need for incessant throwing — Morgan averages under 22 attempts per game. Coach P.J. Fleck’s squad likes to chew clock, running the ball on third-and-manageable and forcing opposing defenses to bend and then break.

With the wideout talent at the Golden Gophers’ disposal, though, there’s a potential mismatch for the Maryland pass defense, depleted through injuries and exposed early in Big Ten play. Coach Mike Locksley knows Minnesota’s offense will pose a slew of challenges. But its passing game could be chief among them against a defense that hasn’t inspired tremendous belief.

“I guess we’re last in the conference in pass defense,” Locksley said, “so it’ll be one hell of a test.”

The Terps have allowed 2,012 yards through the air in seven games on 160 completions, conceding 14 touchdowns — all conference highs. And despite giving up just 67 passing yards in its season-opening win over Howard, Maryland’s 287.4 passing yards allowed per game is the worst mark in the Big Ten, inflated by 400-yard performances from Penn State and Purdue.

And now the Terps must contend with a stacked Golden Gophers receiving corps. There’s Bateman, who has compiled 28 catches for 605 yards. Tyler Johnson has hauled in 39 receptions for 589 yards and six scores. And Chris Autman-Bell has four touchdowns and another 232 yards, creating a formidable three-pronged attack in addition to running back Rodney Smith.

“[Fleck] likes to control the tempo of the game,” Locksley said. “Then they also have the three receivers that I feel are as good as any three receivers in this league. … We’ve got to really play sound and keep the ball in front of us.”

That task has been harder for a defense rife with injuries. Before the season started, safety Antwaine Richardson tore his ACL. Since then, cornerback Marcus Lewis has missed time and cornerback Tino Ellis will miss the remainder of the year with an upper-body injury, pushing true freshmen Lavonte Gater and Deonte Banks into increased roles. Rookie safety Nick Cross earned the first start of his career against Indiana, too.

As expected, teams have picked on that unit and have avoided defensive back Antoine Brooks, lining up in spread formations to get the playmaker away from the box.

“No. 25, … he was a nightmare for us last year,” Minnesota offensive coordinator Kirk Ciarrocca said, referencing Brooks’ performance during Maryland’s 42-13 win in 2018. “He really gave us a really hard time, so I’m very concerned about that.”

Locksley anticipates defensive coordinator Jon Hoke to continue an aggressive approach, hoping pressure on Morgan will limit some of the Golden Gophers’ passing proficiency. It’s a fine line to walk, though. In man schemes, which the Terps run more than half the time, the first-year head coach has noticed four- or five-man rushes aren’t winning the individual battles along the line frequently enough. And when Hoke dials up the pressure, there’s a risk the young cornerbacks are hung out to dry.

In Maryland’s losses this year — against Temple, Penn State, Purdue and Indiana — the blitz that found the quarterback 12 times through the first two games managed one sack or fewer. An uptick in that department could help limit Morgan’s downfield production.

“We’ll continue to be aggressive,” Locksley said, “but we’ll be smart with how we do it.”

Even though Indiana managed 334 passing yards last weekend, Brooks said he’s noticed an improvement in coverage. Much of it comes down to learning how to communicate and remain focused throughout the entire matchup.

As the elder statesman in an otherwise youthful secondary, he’s taken on a leadership role, attempting to meld a hodgepodge of players into a cohesive unit.

“Talking to the young cats every day,” Brooks said, “making sure they communicate with me.”

But Saturday will present an imposing matchup with three wide receivers who have displayed a propensity for big plays and small plays alike.

So although the Terps have forced takeaways in 19 straight games and feel they’re beginning to find answers in the secondary, the trio of Bateman, Johnson and Autman-Bell could expose the team’s primary weakness — or show how far it’s come.