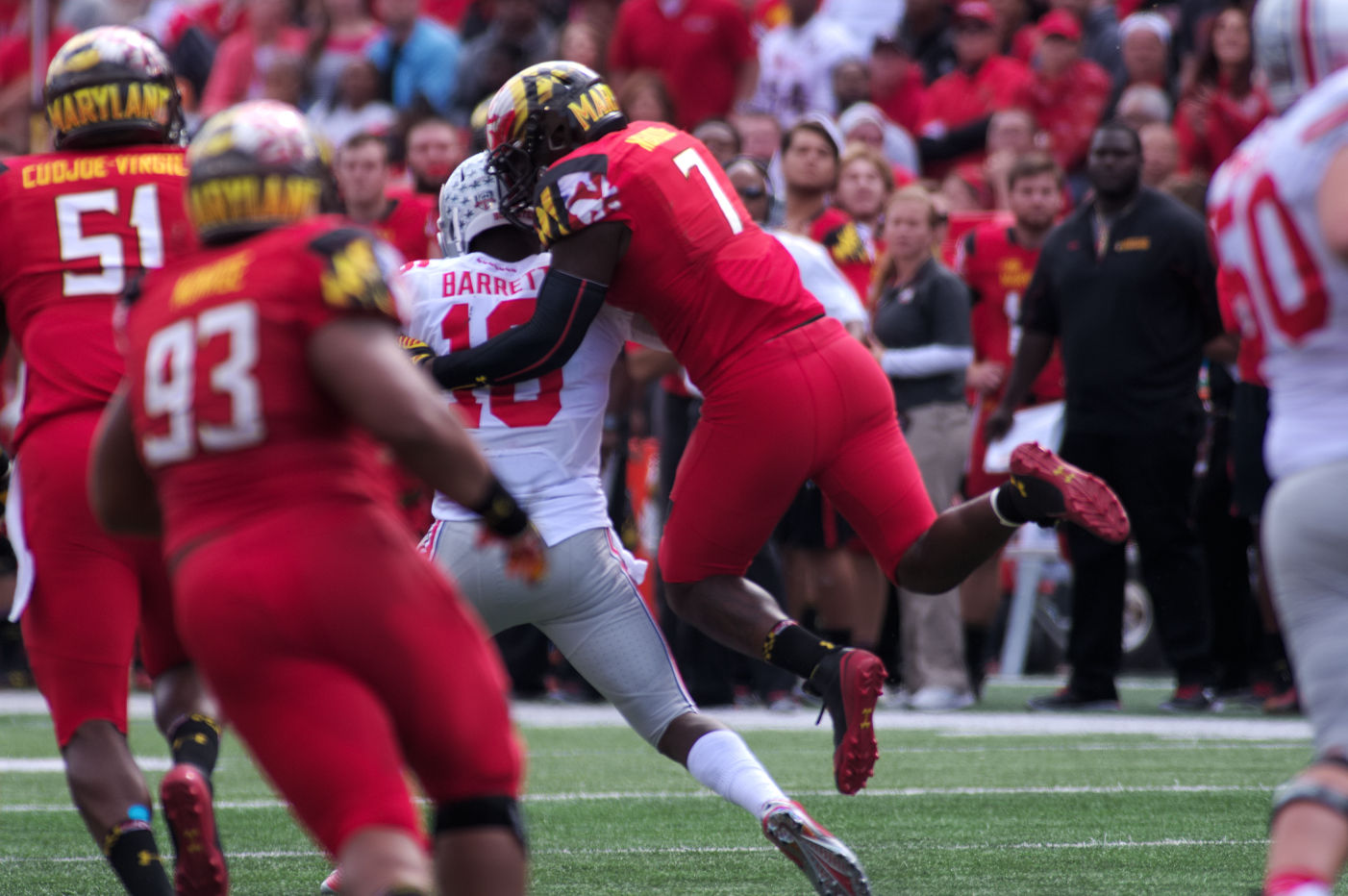 Linebacker Yannick Ngakoue sacks Ohio State quarterback J.T. Barrett just before the end of the first half in a 52-24 Terps' loss.

Week seven in the NFL was a big one for a couple of former Terps, with some unlikely performances leading the way for their respective teams.

Ngakoue recorded his first career touchdown in the Jacksonville Jaguars 27-17 win over the Cincinnati Bengals on Sunday. The fourth-year defensive end intercepted Bengals’ Quarterback Andy Dalton on an attempted screen pass and returned it 23-yards to put the game out of reach. Ngakoue also recorded two tackles and a pass deflection in the win.

After a seven-catch, three-touchdown performance in week 6 against the Eagles, Diggs hauled in seven catches again, this time for 142 yards in the Minnesota Vikings’ 42-30 win over the Detroit Lions. After a slow start to the season, Diggs is back on track and on pace for more than 1000 yards on the year.

Johnson recorded 10 carries for 29 yards and caught four passes for 28 yards in the Detroit Lions’ 42-30 loss to the Minnesota Vikings. With Lions’ starting running back Kerryon Johnson being placed on the IR after leaving the contest with a knee injury, Ty Johnson is expected to see his workload increase. The 2019 sixth-round pick has a good chance to make his first career start in week 8 against the New York Giants.

Jefferson recorded one tackle in the Seattle Seahawks’ 30-16 loss to the Baltimore Ravens.

Woods did not record any statistics in the Chicago Bears’ 36-25 loss to the New Orleans Saints.

Jackson did not record any statistics in the New England Patriots 33-0 win over the New York Jets. He did play, but had a bad night, getting called for pass interference three times.

Cowart did not record any statistics in the Patriots’ win.

Savage missed his second straight game after suffering a high-ankle sprain against the Dallas Cowboys in week 5.

Davis missed his third straight game after sustaining a concussion in week 4 against the New York Giants.

This week was the bye week for the Carolina Panthers.

This week was the bye week for the Carolina Panthers.