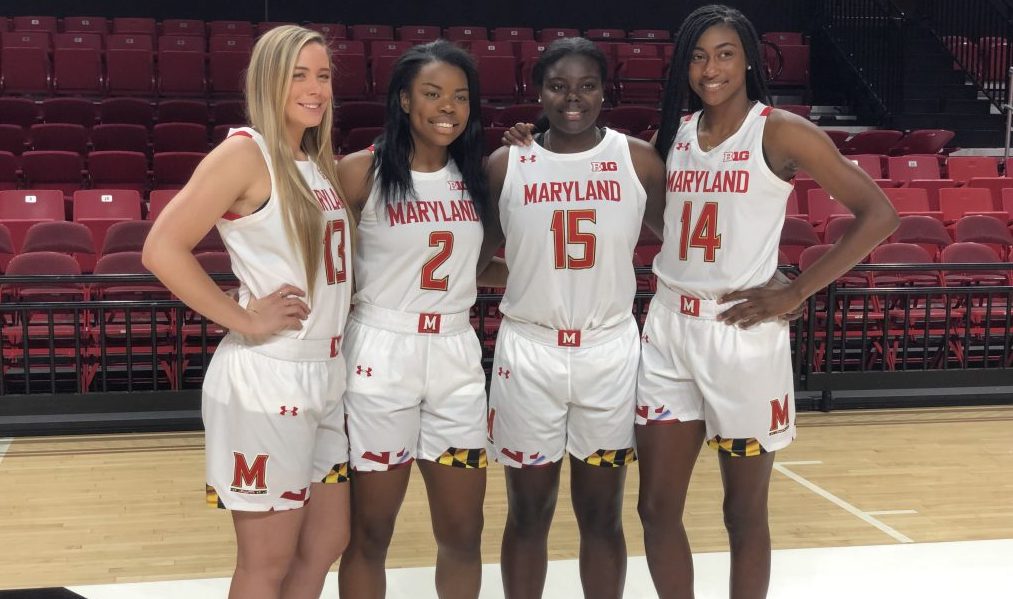 With nine siblings and over 70 cousins, Maryland women’s basketball forward Faith Masonius has had her fair share of dealing with a range of personalities.

While not many incoming freshmen would tout leadership as a primary strength, Masonius believes her extensive family has molded her to take on that role in her first year with the Terps.

And she’s just one in a crowd of highly-ranked Maryland freshmen, with coach Brenda Frese’s 2019 class slotting in as ESPN’s No. 3 group in the nation. The newcomers have already made an impression on Frese and their teammates, employing mindsets far beyond their years without yet playing a minute of meaningful college basketball.

“I just love their drive. Every day in practice they’re willing to learn. They listen very well to coaches, to [players], and you’ll see in the season just how determined they are to get better,” senior guard Kaila Charles said. “They don’t play like freshmen at all.”

Each of the four freshmen — Masonius and guards Zoe Young, Ashley Owusu and Diamond Miller — ranked within ESPN’s top 50 recruits from last season and averaged over 20 points per game in high school.

But the Terps will be without Young, who tore her ACL during a non-contact practice drill in early October. She is scheduled for surgery on Oct. 28 and will miss the entire season. But Young still plans to make an impact in any way she can off the floor, whether by studying film or making her teammates laugh.

“It’s definitely disappointing, but allows her the opportunity to use this redshirt year and come back even stronger,” Frese said during the team’s media day Thursday. “I’ve been so impressed with her mindset coming out of this and her preparation to move forward.”

Even without Young’s services, Frese and the rest of the Maryland squad repeatedly emphasized the work ethic, maturity and skillset of the freshmen. They’ve hit the ground running in practice and are looking to make an immediate impact when the season gets underway.

Owusu was the highest-ranked recruit of the bunch, the No. 7 overall player and the No. 1 guard, as well as the Virginia Gatorade Player of the Year and a McDonald’s All-American. Despite a horde of individual accomplishments, Owusu said she’s naturally shy. But the welcoming nature of her coaches and teammates have helped her acclimate to her new surroundings, she added.

“She just has that ‘it’ factor when you watch her on the court,” Frese said. “Just the number of plays she can make, whether it’s getting someone else involved, scoring the basketball, her ability to get to the rim or push the ball in transition has been at a really high, elite level.”

Miller boasts a bevy of accolades, too: the 17th-ranked recruit, a McDonald’s All-American and New Jersey Gatorade Player of the Year. She was also a member of the USA Under-19 national team that won gold in the FIBA World Championships this past summer, an experience she said helped prepare her for the elevated level of competition she’ll face this season, particularly in terms of physicality.

Although she’s listed as a guard, Miller is one of the taller players on the team. She describes her game as versatile and is pleased with her quick integration into the squad.

“Diamond Miller is another one that has had an impressive start. 6-foot-3, long, gives us a dimension at the wing that we haven’t had for quite some time,” Frese said. “Tremendous wingspan, can score it, can defend, can rebound with that size.”

And though Masonius is the lowest-ranked recruit of the four, she also reached impressive heights during her high school career. Her 20.4 points and 11.5 rebounds per game as a senior earned her NJ.com First Team All-State honors, and Frese pointed to her high basketball IQ, skillset and a seemingly endless supply of energy as reasons to expect her to earn playing time this season.

With all five starters from last season’s Big Ten championship team returning, it’s unclear how much playing time the three healthy freshmen will receive. But whether it’s during in-game competition or practice, Frese is thrilled about the four players’ involvement thus far and has high hopes for what they can accomplish as Terps.

“Our freshmen have had an impact immediately. I think the thing that jumps out to you, if you know their backgrounds, is they all come from winning,” Frese said. “Most of them have all won a state championship, if not multiple, and you see that when you watch them play with that level of confidence and the mentality they have toward winning.”