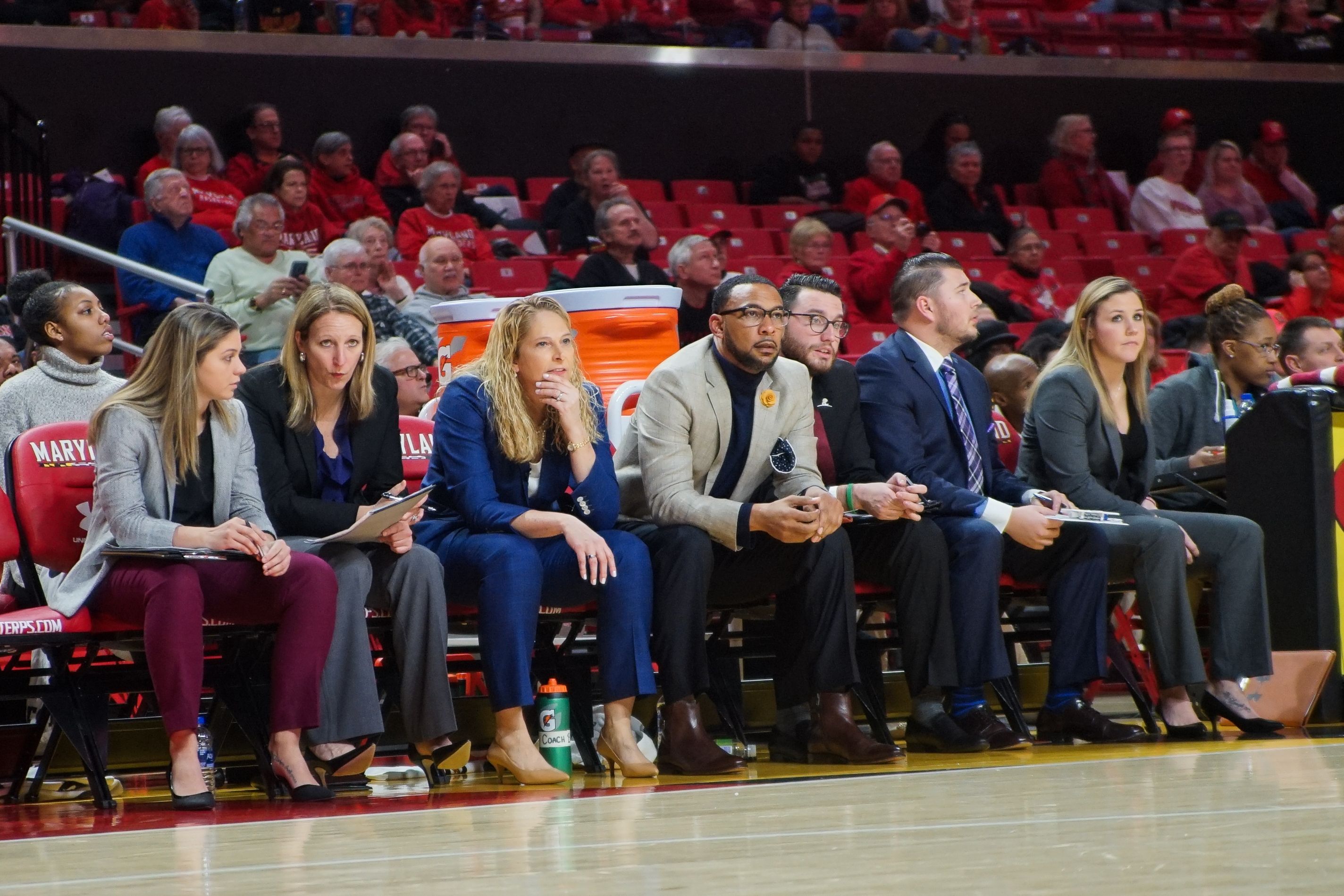 Kaitlynn Fratz (far left) watches gameplay with the rest of the coaching staff during Maryland’s 75-57 win over Wisconsin at Xfinity Center on Jan. 31, 2019. (Corey Hart/The Diamondback)

Kaitlynn Fratz will never forget Jan. 18, 2015. Midway through her senior season on the California University of Pennsylvania’s basketball team, Fratz received news that her teammate Shanice Clark had died.

Clark’s death served as motivation for the rest of the season, as the Vulcans won 18 of their final 20 games en route to a Division II national championship, with Fratz named the tournament’s Most Outstanding Player.

“We played for something bigger than ourselves,” Fratz said. “Winning was comfort, honor, pride, disbelief, intense happiness, and every other emotion you can even think of. Winning was feelings beyond what a scoreboard read.”

Fratz’s showing in the tournament exemplified her perseverance and leadership, characteristics that have been constants throughout her basketball career. And they led her to take the leap into coaching, where she’s shown the same tenacity that propelled her team to the greatest heights in the most trying times.

So when Maryland women’s basketball coach Brenda Frese announced in June that the 26-year-old had been promoted to a full-time assistant coach after just two years with the Terps, it hardly came as a shock to Fratz’s former college coach, Jess Strom.

“I am not at all surprised,” Strom said, “Kaitlynn is the type of person who is dedicated and loyal to whatever place she is at.”

Fratz’s unique basketball journey started at Northern Garrett High School in Accident, Maryland, where she holds school records for points, assists and steals, and led the Huskies to the state championship game in her senior year.

Despite her decorated high school career, Fratz was largely passed over by Division I schools. She was undeterred though, committing to the University of Pittsburgh-Johnstown instead.

“I was blessed and fortunate enough to receive a full scholarship to play basketball in college,” Fratz said. “The division didn’t matter to me as long as it felt like home.”

Fratz spent a year at Pittsburgh-Johnstown, leading her team with 17.2 points per game as a freshman before transferring to California University of Pennsylvania. There, she showed off her leadership qualities to help the Vulcans win their second national title in program history. Strom knew Fratz could seamlessly transfer those attributes to the coaching scene.

“The way she led our team her senior season was pretty impressive,” Strom said. “When I saw the way she handled each player differently but fairly, I knew she would be a terrific coach.”

After her college career, Fratz immediately found a job as a general assistant at Valdosta State in Georgia, which had only two other coaches on staff. Despite the challenging circumstance, Fratz fell in love with coaching as she grew into her new leadership position.

“[It] allowed me to be on the floor and act as an assistant,” Fratz said. “You learn a lot about the game … when decisions are on your plate to be made.”

Maryland would come calling shortly thereafter, with Frese offering Fratz a position as the Director of Recruiting Operations in 2017. Frese has continued to show faith in Fratz, who was named an interim assistant coach in 2018, before dropping the interim status this summer.

“She has given me nothing but confidence and guidance,” Fratz said. “When you have someone who believes in you and wants you to be the best version of yourself, development follows.”

Fratz’s rapid progression from Division II standout to Maryland assistant coach highlights her strong work ethic, something that will be crucial to helping the Terps reclaim the Big Ten crown next season.

“I know she will continue to work as hard as she possibly can to make the Maryland women’s basketball program the best it can possibly be,” Strom said.