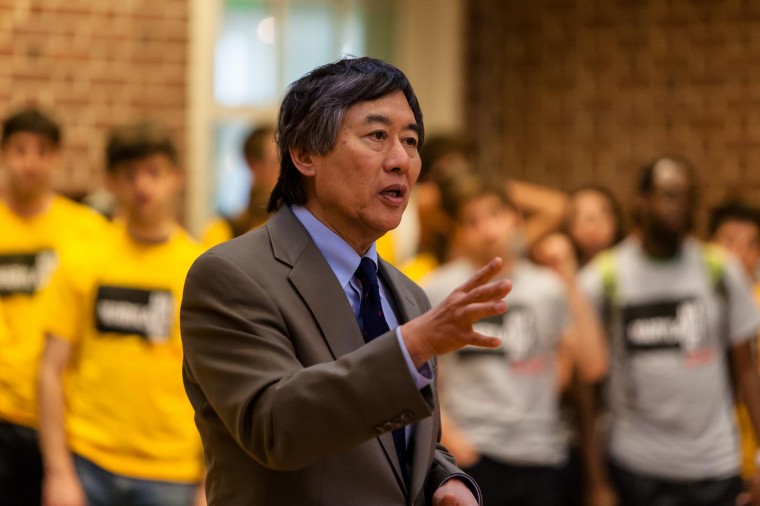 The search for Wallace Loh’s replacement as University of Maryland president is off to a disappointing start. The presidential search committee held two open forums on Sept. 24 — both of which occurred during class time — and the general consensus seemed to be that input from students, staff and other community members fell on deaf ears.

The Student Government Association felt it necessary to propose emergency legislation calling for more student input in the selection process. David Rekhtman, the bill’s sponsor and the SGA’s speaker of the legislature, said while referencing the forums, “People would come up with legitimate serious concerns and they would just say, ‘Thank you, next.’”

Katie Brown, a communication doctoral student and activist at this university put it better than I could: “It’s people talking into a void at a bunch of people who will smile at you and turn around and make the decisions that please whatever eight donors they give a shit about this week.”

After everything that’s happened over the past few years, are we seriously doing this again?

Are the powers that be seriously going to pick, with almost no public input, some glassy-eyed administrator who will admirably carry on Loh’s wretched legacy at this university? Will decision-making power seriously rest with a presidential search committee that includes only one undergraduate student and no union representative — but does include Gary Williams? Will this university seriously operate in 2022 the same way it did in 2018?

Ever since this university more or less completely imploded last fall, I’ve written a number of what I’ve come to think of as “Max’s Plan” columns: Max’s plan to fix the Board of Regents; Max’s plan to elect the next university president; Max’s plan to end higher education austerity. Some of these ideas are surely fantastical, but they are proof of my optimism, following tragedy after tragedy after tragedy, that something constructive can emerge out of the chaos. Instead of whining interminably about the status quo, why not try to devise plans for cleaning up the wreckage?

But man, does this presidential search look grim. I can’t shake this dread that we will remain in the same endless cycle: Massive tragedy leads to promises of transparency and reform, which leads to a brief period of optimism, which ends when the reform is superficial or absent and gives way to another massive tragedy.

Sometimes, though, positive change happens — slowly, gradually — within these awful cycles. Maybe it will in this case, too. Maybe the reforms to the Board of Regents that passed in the last legislative session will make a slightly positive difference. Maybe students and staff can pressure the committee into mandating that presidential  finalists appear in open forums. Maybe, during those forums, the finalists will make promises to students and actually keep them. Pessimism about this process is in no way an excuse for complacency.

Indeed, at other, rarer moments in history, institutions are able to break out of these cycles. If such a break happened here — if mass dissatisfaction prompted a dramatic change in course — it would be due to the folks who were constantly agitating against this university’s powerful interests, even when their chances of success seemed slim.

Either of these types of positive change — the painful, gradual improvements or the the remarkable ruptures borne of years of struggle — require hope. By hope, I do not mean the assumption, absent all evidence, that things will be fine soon. Nor do I even mean an emotion that feels remotely good. I don’t think “finding hope” means turning one’s (eminently reasonable) negative emotions about some awful occurrence — climate change, the Trump presidency — and learning how to feel OK again.

So let’s steel ourselves for a long year, keeping throughout the courage to hope. And who knows? Maybe the next president will keep handing out those turtle pins!