USM’s Board of Regents should be elected, not appointed 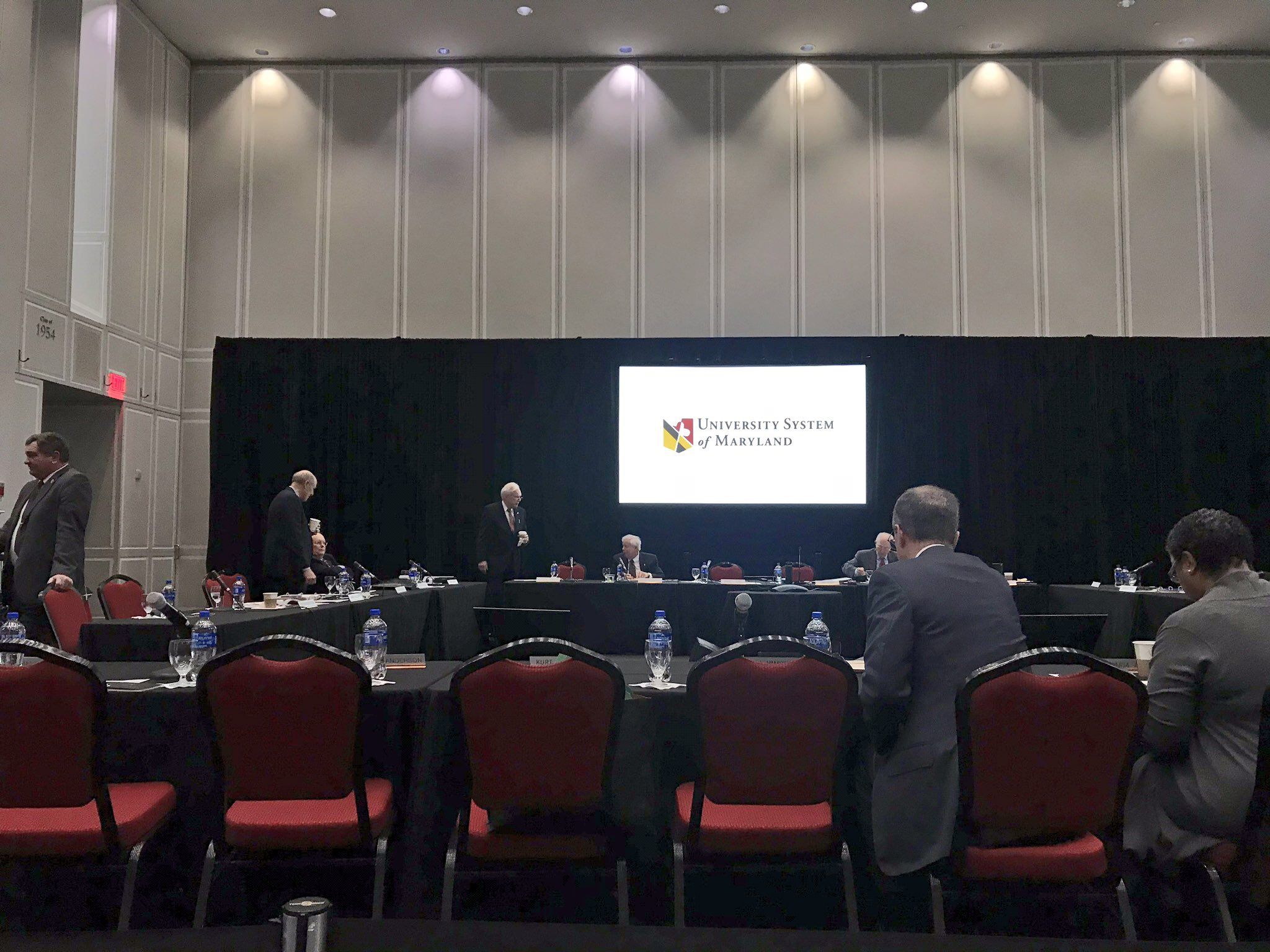 The University System of Maryland Board of Regents meeting on Friday, Dec. 14. (Carmen Molina Acosta/For The Diamondback)

The University System of Maryland’s Board of Regents sucks at its job; this fact becomes more apparent each month. Recently, in response to the board’s bungled handling of, well, pretty much everything, several Maryland lawmakers proposed legislation to reform the body. The bill would add four extra regents to the board, require that all open meetings be livestreamed and have a chance for public comment, among other changes.

The bill itself is fine. It would give the public a better sense of the board’s activities and maybe even give us more of a say in its decisions. These are critical improvements to a body whose past use of closed meetings has been abusive. But this legislation is ultimately a pretty timid reform — which is perhaps why the system seems to support it. For the most part, the bill doesn’t cut to the core of the problem: the kind of people who constitute the board.

The Board of Regents is almost entirely made up of rich people. It’s chock-full of bankers, weapons peddlers, real estate executives, health care CEOs and partners at big law firms — and, of course, one student representative. The previous chairman of the board, who resigned in November, was Gov. Larry Hogan’s campaign chairman.

Rich people tend to have bad ideas about public education, and the influence of wealthy donors on University of Maryland policy is deeply malign. What’s more, rich people often have different responses to complex moral decisions — a notion that’s supported by contemporary social science and older sources like the New Testament.

Many different groups have a stake in the university system’s governance: students, faculty, graduate assistants, employees, parents, taxpayers. Each of these groups has specific experiences and needs that deserve consideration when the board makes consequential administrative choices. And yet, the regents mostly just consider the interests of rich donors. How odd!

A reform package with teeth would bring these other stakeholders into the fold. I’d like to see a system in which a certain number of seats on the board are set aside for representatives from each key group. You could have two seats for undergraduate students, a seats for GAs, a couple of professors, two university employees and a donor, if absolutely necessary. Legislation could also reserve a seat for parents or a seat to represent Maryland voters.

Such an approach would diversify the interests represented on the board. Instead of asking a banker or a former mobile office salesman to guess what graduate students need, a graduate student representative would just tell the board what they need. This method would be a radical improvement from the status quo, in which a handful of advisory councils — representing students, faculty or employees — report to a board of plutocrats but have no voting power.

How should these representatives be chosen? There’s room for flexibility, but I can think of three main methods. There’s the current system, in which the governor appoints each regent. This would not be my preferred method; it’s too easy for the governor to stuff the board with friends and sycophants, or to try to influence board actions. That’s not just a hypothetical — in 2015, Hogan repeatedly bullied the board into rescheduling a key vote on differential tuition, giving students and the public almost no input.

One could also designate representative institutions to select the regents. For example, university senates or student governments could select student regents, and employee union chapters could elect employee regents. The critical work here, though, would be to find institutions that truly represent their respective stakeholder group, across all the colleges and universities in the system.

The third option is to incorporate more direct forms of democracy. Montgomery County middle and high school students directly elect a student member to their board of education. There’s no reason students within the university system cannot do the same. If we wanted to include a representative of Maryland voters, candidates for the role could appear on the ballot in November. In Michigan, for example, voters directly elect the regents that govern three of the state’s 16 public universities, including our Big Ten peers in Ann Arbor and East Lansing.

At this point, some might ask why Maryland shouldn’t adopt a similar system of direct, statewide elections for each regent. Reasonable people can disagree on this point, but I think my model would better represent the individuals and groups who constitute the university system. Stakeholder democracy gets “closer to the ground.” A system in which, say, GAs directly elect their own representative would guarantee the representation of GA interests on the board. Statewide elections might not.

Additionally, running a successful statewide campaign is very expensive, which, therefore, leads to fewer working class or poor candidates. My model — in which unions could elect employee regents — would clear the way for working-class representation.

The framework of stakeholder democracy is far superior than the university system’s current framework — letting the rich and politically connected dictate Maryland’s public higher education policy. It would also do a better job than statewide elections at representing specific concerns of various university-connected groups. Hopefully this legislative session will see reform packages that take seriously the extent of the board’s dysfunction and propose dramatic changes to the status quo.