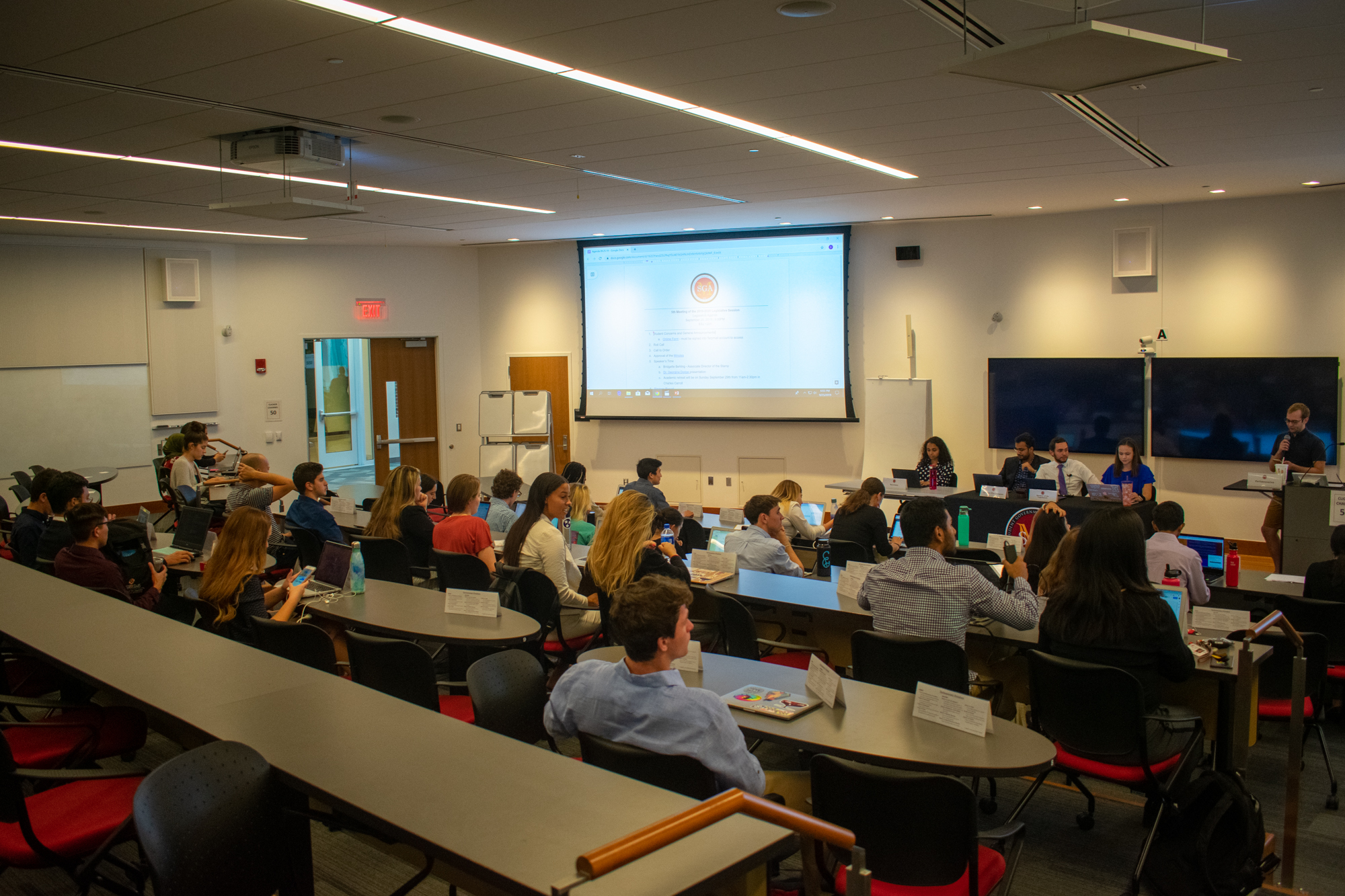 On Tuesday, the committee charged with appointing the university’s next president — set to take over after this academic year — opened its doors to students, faculty and community members, asking to hear concerns and questions about possible candidates.

But some Student Government Association members took issue with the forum, criticizing it for not prioritizing student input. Now, they’re calling for a more open process.

SGA President Ireland Lesley called for forums with the candidates themselves once they’re chosen. The candidates aren’t currently scheduled to appear before the campus community, according to the university’s presidential search webpage.

“It’s critical for the committee to know how frustrated students feel about this process,” she said. “We feel like our voice is being excluded.”

David Rekhtman, the speaker of the SGA’s legislature and the bill’s sponsor, echoed Lesley. He said the search committee members at Tuesday’s forum often seemed uninterested in students’ questions or comments.

“Oftentimes it felt like they didn’t care even though they said they did care,” Rekhtman said. “People would come up with legitimate serious concerns and they would just say ‘thank you, next.’”

Loh initially announced his retirement in October, amid fallout from the death of Maryland football player Jordan McNair, who suffered heatstroke at a team workout. Subsequent investigations found that athletic trainers failed to recognize and properly treat McNair’s condition, and that administrative oversight allowed widespread abuse in the football program.

At that October press conference, Loh said he’d retire in June 2019. But in January, he announced he’d stay on another year, prompting frustration from some students and faculty who felt he had gone back on his word.

The committee looking for his replacement is an entity branched off the University System of Maryland’s Board of Regents, which sets policy for this university and 11 other institutions across the state.

But SGA members said the relationship between the university community and the board has been damaged — making them uneasy trusting the regents with the process.

The board — run by regents appointed by the governor — took control of both investigations into McNair’s death after this university launched them, prompting criticism from many that it had overstepped its bounds.

In addition, the Washington Post reported that the regents charged with investigating the football program — who recommended embattled head football coach DJ Durkin keep his job after the scandal — threatened to fire Loh if he ousted Durkin.

“Non-transparent decision making and poor leadership has led to a litany of scandals,” the SGA’s resolution read, “causing a significant gap in trust between students and the Board of Regents.”

In addition to meeting with the presidential search committee, the SGA plans to work with the Board of Regents’ student member and USM’s Student Council to ensure that the board maintains transparency throughout the process.

They also intend to work with student groups such as the Residence Hall Association and the Graduate Student Government to further mobilize students and promote the SGA’s message.

“Our campus deserves to be included in the process,” Lesley said.

After the campus and many state lawmakers spoke out against the board last year, the Maryland General Assembly voted to institute a series of reforms. Now, the board is required to livestream its meetings, and student regents’ term lengths were doubled, among other changes.

But for David Pontious, a member of the SGA’s Student Affairs Committee, the board still isn’t trustworthy enough to handle the selection.

“It’s frankly insulting to students that this momentous process to select our next president will play out behind closed doors and broadly without their input,” he wrote in a message. “The days of the Board of Regents’ smoke-filled room must end.”

The SGA will vote on the resolution at the next week’s general body meeting, which will be held on Oct. 2 in the Benjamin Banneker Room at Stamp Student Union.