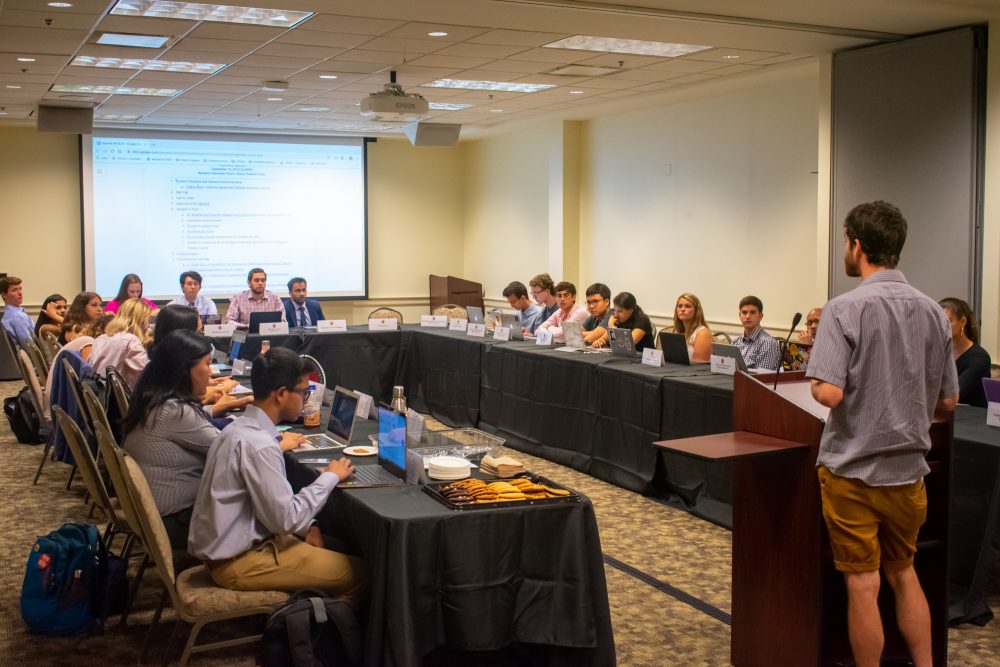 The SGA met on September 18th, 2019 for their 4th meeting of the fall semester. (Elliot Scarangello/The Diamondback)

The University of Maryland’s SGA officially pushed back this week against a potential ordinance that would bar “unruly social gatherings” from College Park.

The resolution, which was passed with a 36-0 vote and one abstention, raises concerns that the language of an ordinance the City Council is considering may put students at risk of hefty fines and financial or housing insecurity.

“We are not looking to promote dangerous or illegal behavior, but we do believe the language in the current ordinance is vague, which is concerning,” said SGA president Ireland Lesley. “We don’t want students getting unreasonably fined and we are hoping the City Council understands that, that’s the perspective we are coming from.”

The ordinance — which the council discussed Sept. 10 — targets “unruly social gatherings” of any group of four or more people on private property where there may be public drunkenness, underage drinking, drug use or excessive noise.

Some students worry that landlords may raise rent or refuse to rent to college students if this ordinance is passed, said Quintin Harry, a member of the Governmental Affairs Committee. He also worried the ordinance’s language would affect enforcement.

Harry pointed to a clause in the ordinance that defines “excessive noise” as 55 decibels at nighttime.

“That is the sound of a quiet conversation or slightly louder than a dishwasher,” he said. “If you can hear that from the curb of a building, the police can then go in and fine those [responsible].”

The SGA plans to sign a letter along with the presidents of the Panhellenic Association and the Interfraternity Council, addressed to College Park Mayor Patrick Wojahn and the College Park City Council, outlining the negative financial and legal ramifications the ordinance could pose to students if passed.

In addition to the letter, SGA members also intend to circulate a petition around the student body to give people the chance to explain why they oppose the ordinance. The body is also set to promote the letter and petition on its social media pages to spread awareness.

Instead of passing the proposed legislation, SGA’s College Park City Council liaison Dan Alpert wrote in a message the City Council should work with the SGA and other organizations to address the issue in College Park, “rather than continuing to put punitive measures on residents.”

“There’s a better way than this proposed ordinance, and that’s what the SGA is saying,” he wrote.

The City Council’s public hearing for the ordinance will be held next Tuesday, Sept. 24 at Davis Hall.