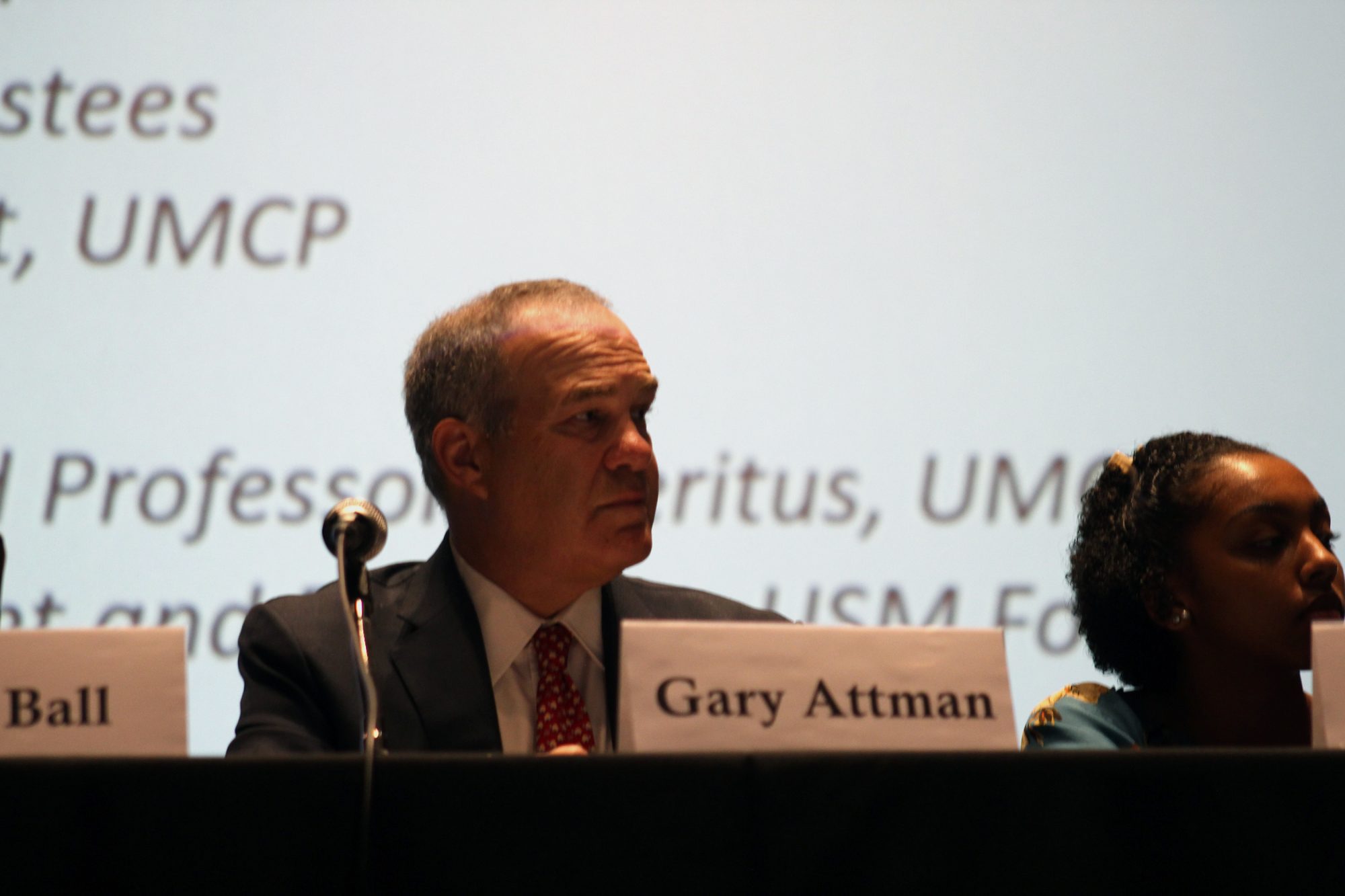 Attending the University of Maryland was always a dream for Katie Brown. So, when it came time for college, it was the only school she applied to.

But that admiration disappeared when Brown became a graduate assistant at the university, after her undergraduate years. That’s when she said she began to feel as though the institution exploited its workers for the benefit of those at the top.

Ten years later, she’s lost the pride she once had to be a student at the university.

“I haven’t put on my Maryland sweatshirt for a year,” Brown said. “And I know that’s, like, a small thing, but for somebody that loves this place like I do — or did — that’s a big thing.”

The search for the university’s next president has high stakes for Brown. And on Tuesday, she joined other university employees, students and community members to share what she’d like to see in the school’s next leader — and criticize the search for that person, so far.

Tuesday’s two open forums constituted students’ last opportunity to sit before committee members and provide their input on the presidential search. The rest of the process will remain confidential as a group of finalists is chosen and interviewed, University System of Maryland spokesperson Mike Lurie wrote in an email.

At the forums, some called out the committee for not engaging students in the presidential search process. Students criticized the board for planning the forums during class time, naming it as another reason they and their classmates feel ignored.

“The Board of Regents is asking the campus to trust them to make a hire that is going to address all the concerns that we have,” said Ireland Lesley, president of the Student Government Association. “After the board’s decision-making last year on the non-fire of coach Durkin and our accreditation being placed on review, that’s a lot to ask.”

Long-time university President Wallace Loh will step down at the end of this academic year, following a one-year postponement of his retirement. Loh announced his initial plans to retire Oct. 30, amid an investigation into the university’s football culture and the death of Maryland football player Jordan McNair.

Speakers at this week’s forums were offered three minutes to voice their thoughts and opinions to search committee members. Eighteen of the 20 search members were in attendance. While the search committee will determine the candidates and finalists for the position, the Board of Regents will make the final hiring decision.

Many speakers voiced the importance of accountability and transparency in the university’s future leader in the wake of the death of McNair, who succumbed to heatstroke suffered at a university workout in 2018.

“I think that 19-year-old young man is now buried in the ground for no good reason,” said Zabrina Anzyl, assistant director for student services and an alumna of this university. “I also think that there should have been a lot swifter accountability when it came to taking action for that incredibly serious worst case scenario infraction.”

Speakers also stressed the importance of informing and updating the campus community appropriately in the wake of such events.

Last year, following the death of McNair, there was also a mold epidemic in dorms and an adenovirus outbreak — which university officials waited 18 days to tell students about after finding the virus present on the campus — that led to the death of student Olivia Paregol. The university faced fierce criticism for its delayed response and lack of communication with the student community.

Diversity issues were also central to Tuesday’s forums, with many calling for the need to assist LGBTQ students, international students and people of color on campus.

“We need someone who can appreciate that the value of a student is more than an SAT or ACT  score,” said Kim Nickerson, assistant dean for diversity, equity and inclusion in the behavioral and social sciences college. “Maryland has one of the best education systems in the country, yet we underperform in recruiting African American and Hispanic Latino students to this university.”

According to a report from the university’s Institutional Research, Planning and Assessment office, the 2018-19 academic year’s freshman enrollment for African American students was at 7.3 percent — its lowest in decades. The data also revealed that the overall total of African-American undergraduates dropped to 11.6 percent.

Following the afternoon forum, Gary Attman, a member of the Board of Regents and the head of the presidential search committee, said he was pleased with the student and faculty commentary the committee received.

“We got a wide variety of comments from different members of the university constituency,” Attman said. “And we are taking them to heart, we’ll consider them as we review candidates and interview candidates.”

But Brown and other attendees weren’t as optimistic.

“I think it went exactly how it always went, or how it always goes,” Brown said. “It’s people talking into a void at a bunch of people who will smile at you and turn around and make the decisions that please whatever eight donors they give a shit about this week.”