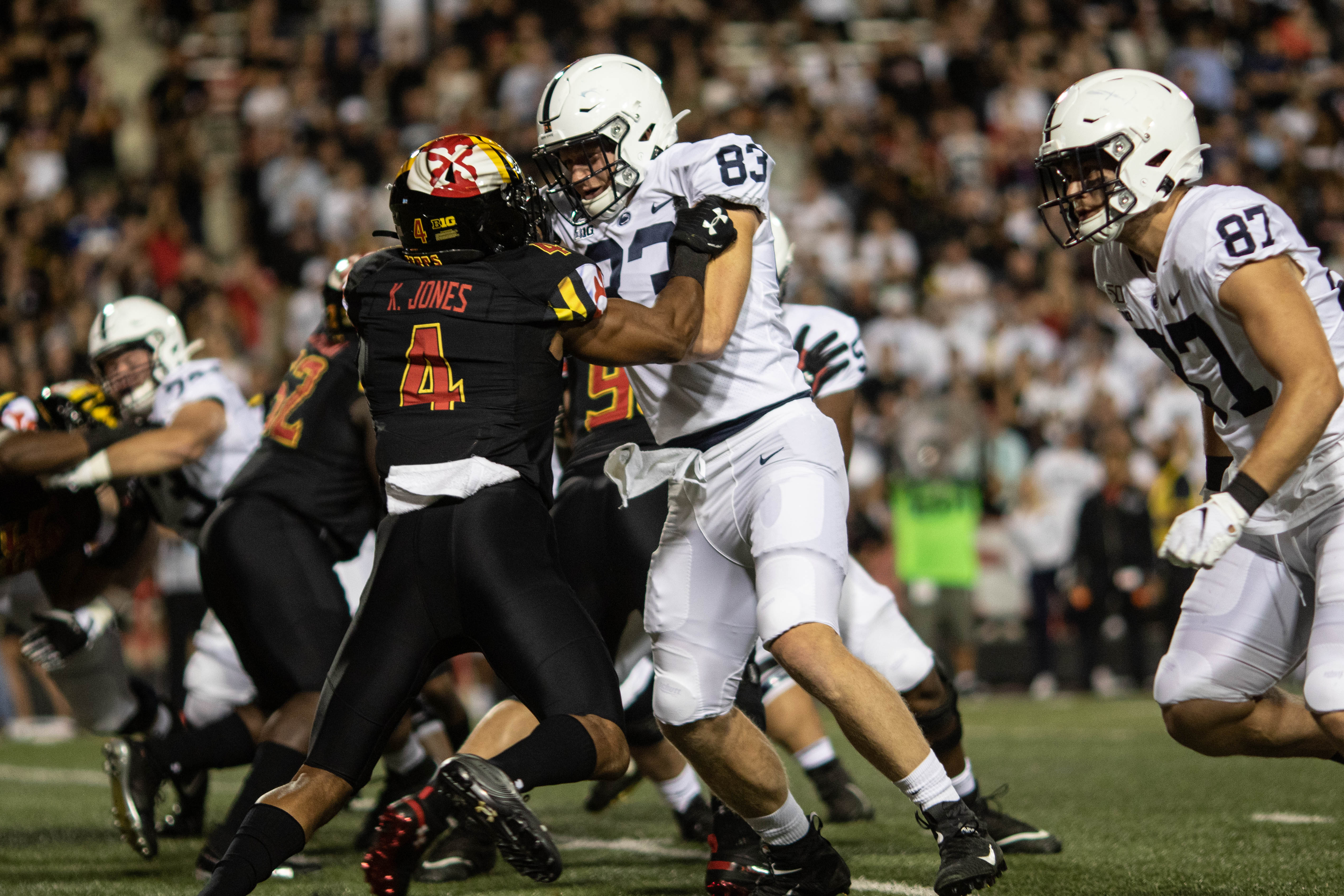 When linebacker Keandre Jones stood at the center of a scrum of reporters following Maryland football’s 59-0 loss to Penn State, he quickly deflected each question. He played a sort of back-and-forth rally between questions and answers, seeming to offer little insight into what went wrong and how the team would fix it.

What did Nittany Lions quarterback Sean Clifford do to make things difficult?

Did this week feel any different?

“Gotta prepare better,” Jones said. “And like I said, it’s a long season.”

But what Jones conveyed, consciously or not, provided his team some way to look past that embarrassment. The issues Friday were plain to see. The nine penalties, three turnovers and 4-for-15 third-down conversion rate would never be a recipe for success, especially against the No. 12 ranked team in the country.

[Read more: “A plus for the game”: Maryland football coach Mike Locksley weighs in on California bill]

Instead of putting those miscues on blast in his press conference, Jones opted to deliver the early makings of a rallying call to his teammates, an urging to stick together despite the ugly defeat. And in the players-only meeting that followed on Sunday, there was a place to vent frustration, identify issues and — Maryland hopes — discover answers, some way to negate what happened at Maryland Stadium in front of 53,228 fans.

“It’s only Week 4,” safety Antoine Brooks said. “It’s not the end of the world. We’ve just got to put our head down and keep pushing.”

As quarterback Josh Jackson stared down tight end Tyler Mabry late in the first quarter against the Nittany Lions and threw his second interception, an opportunity near the goal line to cut the deficit to one possession went by the wayside.

And as Penn State marched 95 yards down the field to go up 21-0, some of the fight went out of the Terps, too.

“That’s my job to make sure that when we have adversity like that, that it can’t create the environment or the culture on the sideline where it’s [a] ‘Here we go again’ mentality as opposed to, ‘Let’s go do it again,’” Locksley said.

But after that drubbing — Maryland’s third straight blowout at the hands of the Nittany Lions — it was Jones who called the players-only meeting. The graduate transfer is one of 10 players on the Terps’ “leadership council,” as Locksley described it, so the coach wasn’t surprised to hear he stepped up. It’s not the first time players have gathered, either. Locksley said each Thursday his players meet as they gear up for another game.

This one, though, was different. It was a direct response to a performance that left a bad taste in the players’ mouths. To Locksley, it shows accountability and maturity from his squad.

Linebacker Chance Campbell said the players tried to go a step further in the meeting than simply venting and resuscitating the obvious miscues that turned Friday’s contest from intriguing to insipid, instead gleaning some sort of understanding and ability to recover in the following weeks.

As Maryland prepares for Rutgers, Jones’ remarks ring true, even if they were repetitive Friday night. The Terps are entering their second Big Ten game of the year, and while the conference poses considerable challenges each week, the season is far from finished.

And the players plan to ensure results such as Friday’s don’t become the norm.

“It’s better to be solution-oriented than problem-oriented,” Campbell said. “Guys were pretty upset about the loss, and I think they were ready to turn that around.”