Running back was Maryland football’s deepest position, but injuries have thinned it 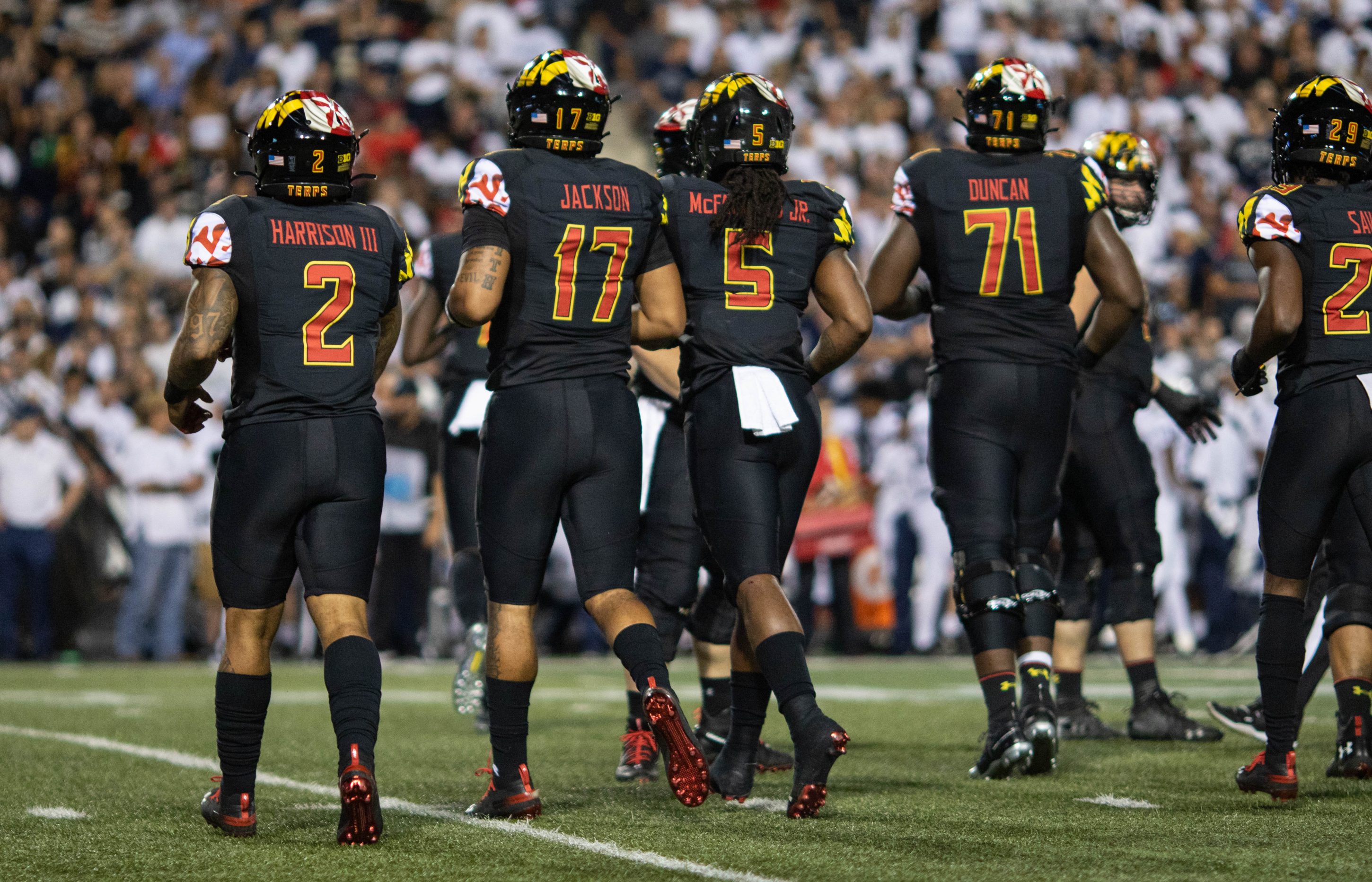 Running back Lorenzo Harrison (2) with the Maryland football offense in the Terps' 59-0 loss to Penn State on Sept. 27, 2019 at Maryland Stadium. (Julia Nikhinson/The Diamondback)

Early in Maryland football’s Friday debacle against Penn State, running back Lorenzo Harrison lined up wide left, and tailbacks Tayon Fleet-Davis and Anthony McFarland stood to either side of quarterback Josh Jackson.

With an overload of backfield talent, coach Mike Locksley has made it a goal to spread touches to all his playmakers. That means including multiple ball-carriers on the field at one time to keep a defense guessing as to who will receive the carry.

The 8-yard gain from Harrison, who looped around and received the pitch from McFarland on a reverse, displayed just how Maryland intends to involve its myriad of running backs.

But the sequence also cost the Terps one of them. Harrison went down hard after the run and made his way to the red medical tent, flinging his helmet and smacking a water bottle along the way. He’s the latest running back to go down through injury, needing surgery to repair a torn MCL and partially torn ACL suffered on the play.

So what once was Maryland’s deepest and most skilled positional group is now down to three runners: McFarland, Fleet-Davis and Javon Leake. They’re all formidable, and the Terps still retain starters 1A and 1B, as Locksley calls McFarland and Leake. But losing Harrison and Jake Funk are blows to an offense that once boasted more running backs than opportunities available.

“We still have some talent there,” Locksley said. “It hurts, but we still have three really talented guys.”

Last week, Locksley announced Funk tore his left ACL for the second straight year. The redshirt junior had rushed for 173 yards and two touchdowns through three games and proved valuable on special teams.

And Harrison, who ran for 62 yards in Maryland’s season-opening wallop of Howard, entered the Penn State contest recovering from a hamstring injury that held him out the two games prior. Locksley said Harrison figured to have a large role against the Nittany Lions, and the reverse was an early opportunity to get the ball in the 5-foot-7 playmaker’s hands.

Harrison showed off his shiftiness when he cut up field, making cornerback Tariq Castro-Fields miss. But his dismay showed through as he walked to the medical tent shortly after, pulling on his red headband after suffering a knee injury. He’d have to have surgery for the second straight season.

“I can’t even start to explain how bad it hurts to be taken away from something your heart desires,” Harrison posted on Instagram. “However, I’m a firm believer that everything happens for a reason, good or bad. So as much as my mind is racing at the moment, I know it will work out in my favor. Hard times either make you or break you. Guess it’s time to get a lil stronger.”

Not much went right for the Terps in that 59-0 loss Friday night. Cornerback Marcus Lewis and right tackle Marcus Minor left with injuries and Locksley said they are game-time decisions for Saturday’s contest against Rutgers. Maryland gained 60 yards on the ground, while McFarland hobbled slightly with a high-ankle sprain that held him out of practice for much of the bye week.

Locksley reminded reporters Tuesday that the Terps still have plenty of backfield talent to draw from. There’s McFarland, who Locksley said is as dangerous in space as Harrison. Leake is a “home run hitter.” And Fleet-Davis is “a jack-of-all-trades” for the Terps.

Those three have combined for 604 yards and eight touchdowns. And they’ll be relied upon heavily going forward.

But with fewer backfield options than before — even if the top three options remain — contributions from other positions will be vital. As injuries start to pile up at the start of Big Ten play, Maryland must hope McFarland, Fleet-Davis and Leake don’t wind up on the sideline as well, keeping the Terps’ running back room their most valuable asset.

“It’s still one of the strengths for our team,” Locksley said. “We lose two really good players in Jake and Lolo, but I still feel it’s a luxury to have the three that we have.”