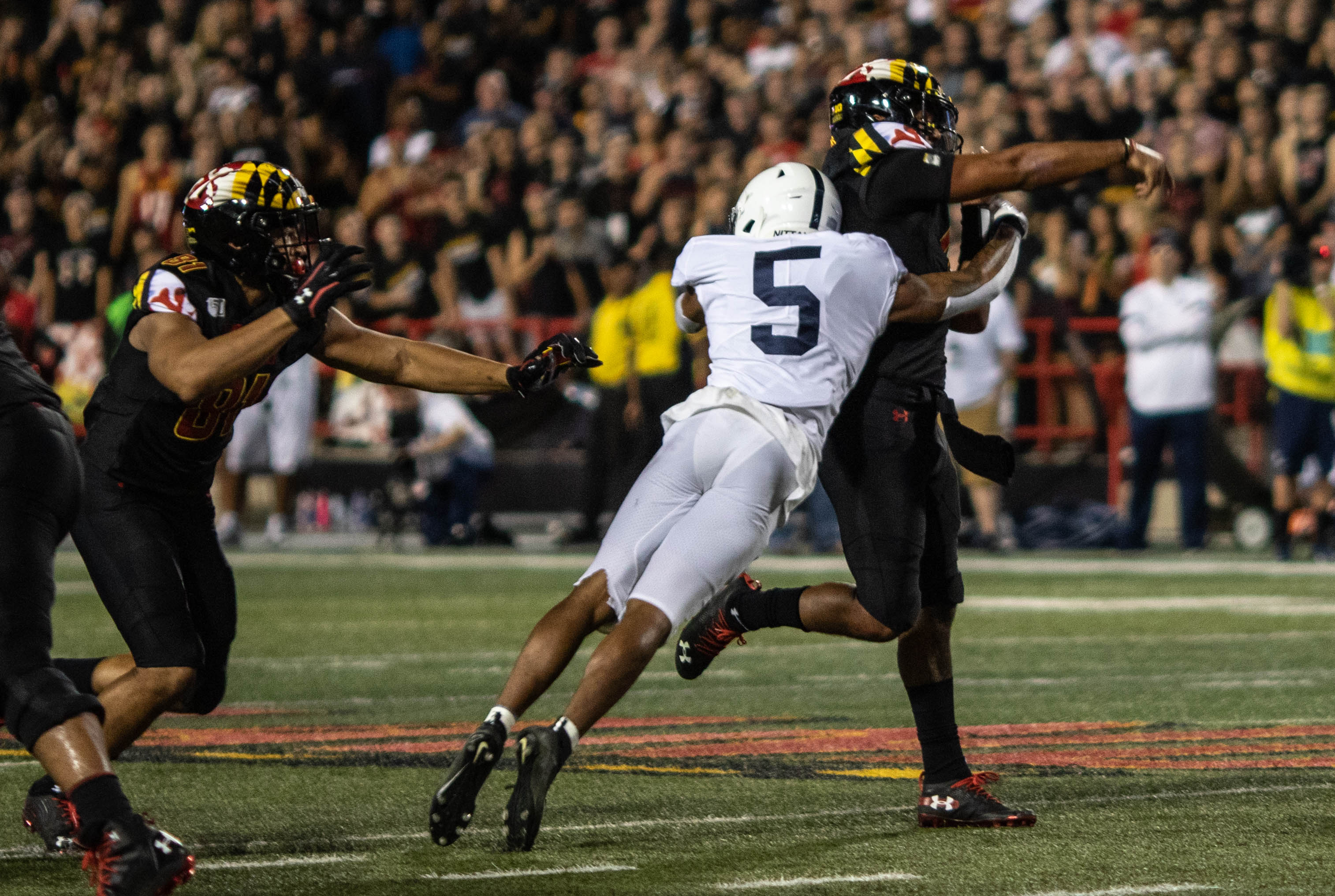 On Maryland football’s fifth play from scrimmage in its 59-0 loss to No. 12 Penn State, Josh Jackson moved slightly to his right and spotted receiver Dontay Demus breaking free on a post route in the middle of the field. Jackson unleashed a line-drive pass that linebacker Jan Johnson snagged for an interception.

Jackson made the tackle on the return, but did so after Johnson had run out of bounds. It drew an unnecessary roughness penalty on the Maryland signal-caller — one of two flags on the home team during a sequence that set the Nittany Lions’ offense up at the 9-yard line, where Penn State would score from one play later.

The errant throw compounded by the subsequent penalties were the first in a bevy of first-half miscues that put the Terps squarely on the wrong end of a one-sided 38-0 halftime score, silencing their portion of the sellout crowd.

“That’s probably the most disappointing part of this game,” offensive lineman Ellis McKennie said. “We beat ourselves in the first half.”

[Read more: Friday night will be a big game, but Maryland football isn’t overhyping it]

After committing nine penalties for 88 yards in the 20-17 loss to Temple on Sept. 14, cleaning up avoidable mistakes was an emphasis during the bye week.

Wide receiver Brian Cobbs said during the week leading up to Friday night’s highly anticipated matchup that the team “can’t have a lot of negative penalties because, especially in big games, those can come back to bite you.”

Cobbs’ warning was prophetic, as the Terps reverted back to committing similar mistakes early on, with eight penalties for 70 yards during the first-half letdown.

Trailing 14-0 just over five minutes into the game, the Maryland offense looked poised to give its crowd something to rave about, marching 64 yards in 13 plays to the Penn State 11-yard line.

On second down, though, it all came crashing down. Jackson stared down tight end Tyler Mabry breaking to the corner of the endzone, drawing the attention of cornerback Tariq Castro-Fields, who cut in front to nab the Nittany Lions’ second interception of the game.

“I think the air came out of us. We put together a good drive, and it was not a great decision, obviously,” Locksley said. “We wanted to at least come away with some points in there.”

The ensuing drive saw Penn State drive 95 yards for its third touchdown of the night, aided by a third-down personal foul committed by Jordan Mosley on a tackle short of the line to gain.

Down 21-0, Locksley inserted quarterback Tyrrell Pigrome into the game to try to create a spark. But the Pigrome-led group incurred similar ineptitude, going three-and-out on the first possession and punting after one first down on the second drive.

Jackson returned to the game after his backup’s brief stint, but his struggles that carried over from the Temple game only continued.

Similar to the loss to the Owls, the redshirt junior never settled in after his opening-drive turnover, finishing 10-of-21 for 65 yards.

“I’ve got to figure out a way to get our quarterbacks having confidence in playing the way we played the first two weeks,” Locksley said. “We’ll watch the tape and figure out the things that they can execute.”

Maryland never recovered from the blunder-filled first half, falling handily at the hands of a team loaded with more than enough talent to capitalize on the extra opportunities handed to it.

“If you have any penalties against a good team like Penn State, it’s going to be a big effect on us,” linebacker Keandre Jones said, “as a defense, as an offense — every phase of the game.”