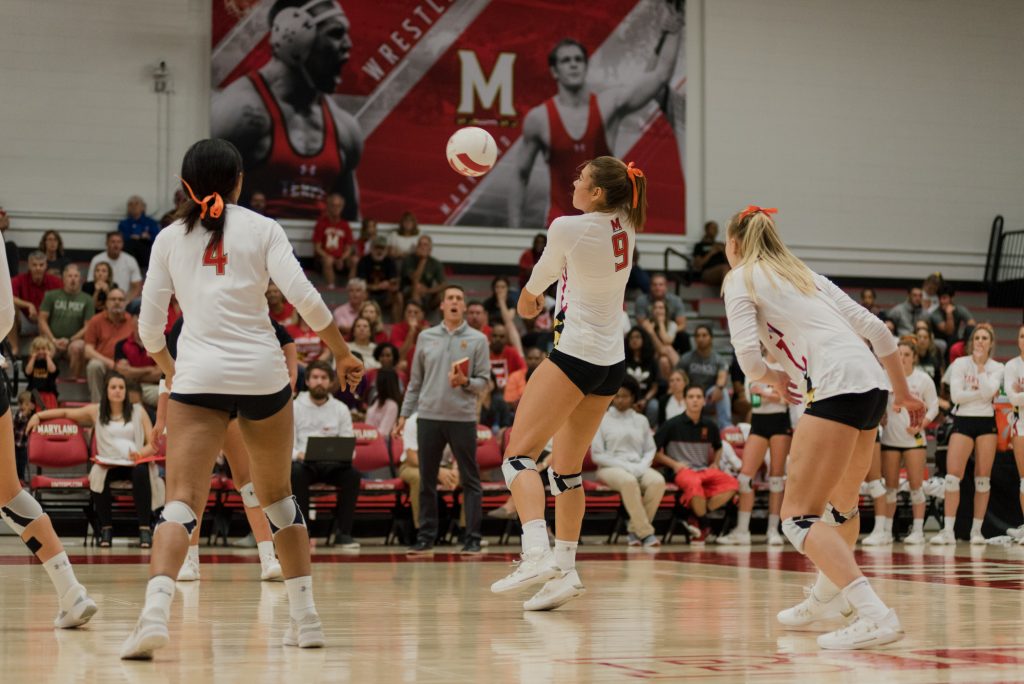 Michigan State defensive specialist Samantha McLean leapt in the air, sending the opening serve of the Spartans’ bout with Maryland volleyball over the net. After a short rally ending in Michigan State’s favor, McLean set up once more.

She would repeat the routine four more times afterwards, as the Spartans jumped out to a 5-0 lead against the Terps in set one, before finally conceding on McLean’s sixth straight serve.

Saturday night’s straight-sets loss to Michigan State marked Maryland’s second straight Big Ten defeat, having dropped its opener against Ohio State. Between the two matches, the Terps won only one set, never leading against the Spartans.

Maryland frequently dug itself into holes, allowing long runs of points from their opponents, and taking themselves out of sets in a hurry. The trend plagued coach Adam Hughes’ squad, which is looking to fix the issue through improving its consistency.

“Giving up runs has been our problem for the last couple of weeks,” Hughes said. “There were a couple times [on Saturday] where they scored [a lot of] points in a row, and I had to call timeout.”

Against the Buckeyes, a seven-point run from Ohio State buried the Terps in set one. In the third set, a 6-0 run put Maryland down eight points, and the team would never recover. And the fourth set saw a 4-0 run from the Buckeyes that brought them back into it, and Ohio State would win it 25-22.

On Saturday, the Spartans never looked back after their fast start to open the match. Set two featured another 5-0 run as they claimed the frame by a seven-point margin.

While the runs took the air out of the Terps, they continued to play without fear despite the clear disparity between them and their opponents.

The streaks were helped by a myriad of Maryland errors. For Hughes, the problems originated right off the serve.

“Obviously we’re not trying to get stuck in those situations, but it hasn’t been one specific area,” Hughes said. “I think it mostly comes back to getting better with our first touch.”

After the Terps’ first two conference matches didn’t go their way, the team will have nearly an entire week to prepare for Michigan to arrive in College Park on Friday. Then, on Saturday, Maryland will get a rematch with Michigan State.

The Terps are looking forward to working on some of the things that went wrong during the unfortunate streaks in the last two matches in the hopes of finding a rhythm in conference play.

“We just need to get back in the gym and work,” outside hitter Rebekah Rath said. “I think we need to work on getting better all around.”