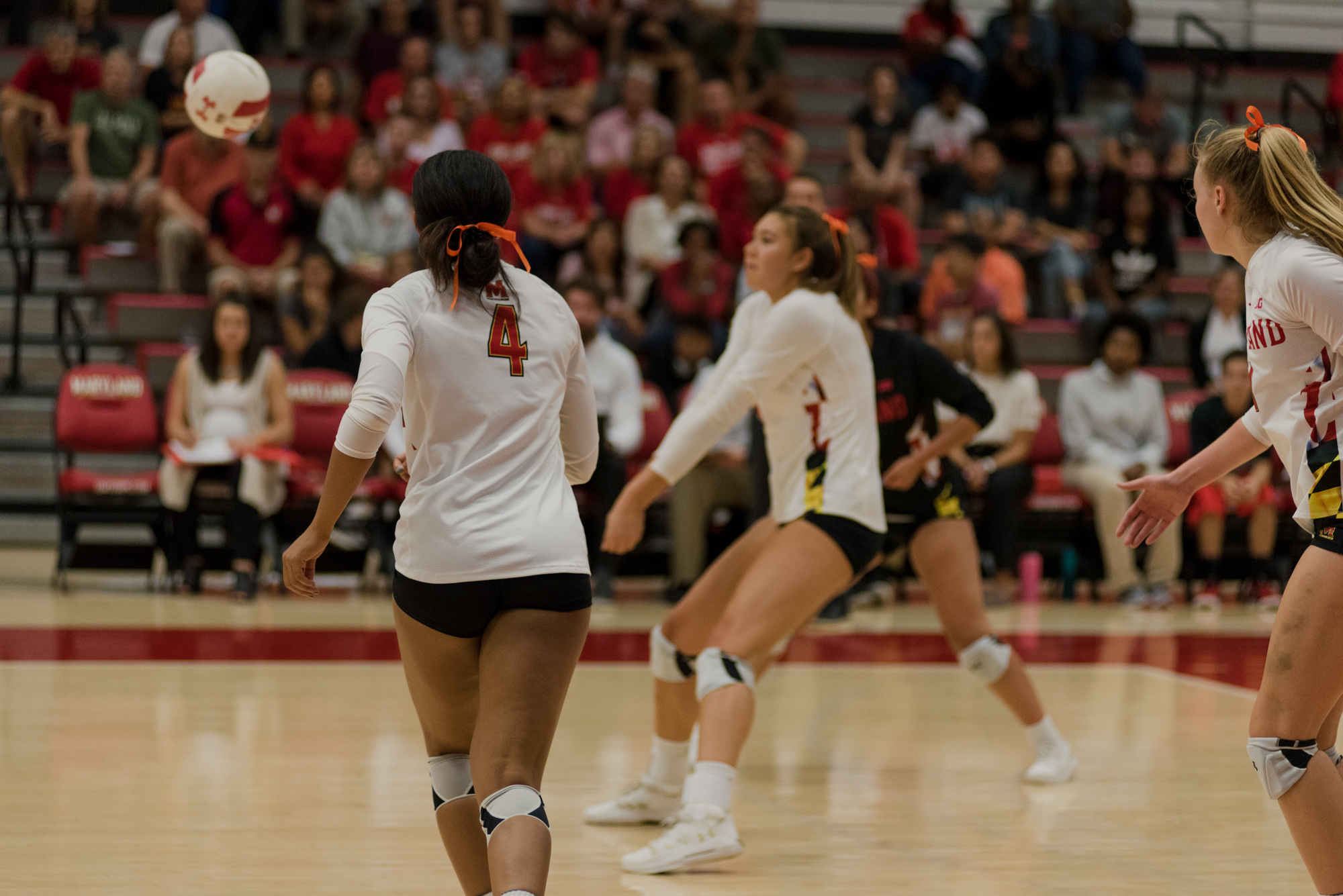 On match point of Maryland volleyball’s Big Ten opener against Ohio State, libero Alegra Rivas dove across the floor, attempting to prolong the match just a little longer. But the ball instead sailed out of bounds, ending the Terps’ hopes of starting conference play 1-0.

“They just kept throwing punches at us,” middle blocker Katie Myers said. “I don’t think we responded the best way we could have.”

[Read more: Maryland volleyball is preparing for the grind of Big Ten play]

Maryland got off to a slow start in set one, falling behind 7-1 early. Outside hitter Mia Grunze’s third kill of the set forced Hughes into calling a timeout. After the stoppage, however, the Terps came roaring back, and they brought the set within three points.

“In the first set, we just didn’t play very well,” Hughes said. “We weren’t ready to go out of the gate, and that’s my fault.”

[Read more: With Nicole Alford back from injury, Maryland volleyball hopes it can take the next step]

Middle blocker Katie Myers shined in set two. She totaled three blocks and two kills, leading the Terps to a 25-17 victory in the set. Going into Wednesday night’s match, Myers led the conference and ranked third in the NCAA with 75 blocks.

In the third set, Hughes’ squad took a big step back. A 10-1 run from the Buckeyes buried the Terps down 17-9. Later, a late run from Maryland came too late, and Ohio State took the set 25-20. Ohio State had a hitting percentage of .250 in set three, while Maryland hit just .138.

Set three featured just two kills from outside hitter Erika Pritchard. Pritchard struggled to get going against the Buckeyes. She finished the match with just eight kills and a hitting percentage of .103, which is well below her season average of .280.

For much of the fourth set, it looked as if Maryland would push yet another match to five games. However, after taking a 19-16 lead, the Terps faltered down the stretch. They allowed Ohio State to go on two different runs of three straight points, giving the Buckeyes the set, 25-22.

“We were hoping we’d be able to finish it out, and go to a fifth,” Hughes said. “We just came up short.”

Maryland never had an answer for Ohio State middle blocker Elle Sandbothe, whose .611 hitting percentage was a match-high. Sanbothe led the charge in sets three and four, which eventually buried the Terps.

“We have so much room to grow, and we know what we need to do to get better,” middle blocker Jada Gardner said. “We just have to forget about this one.”