With Nicole Alford back from injury, Maryland volleyball hopes it can take the next step 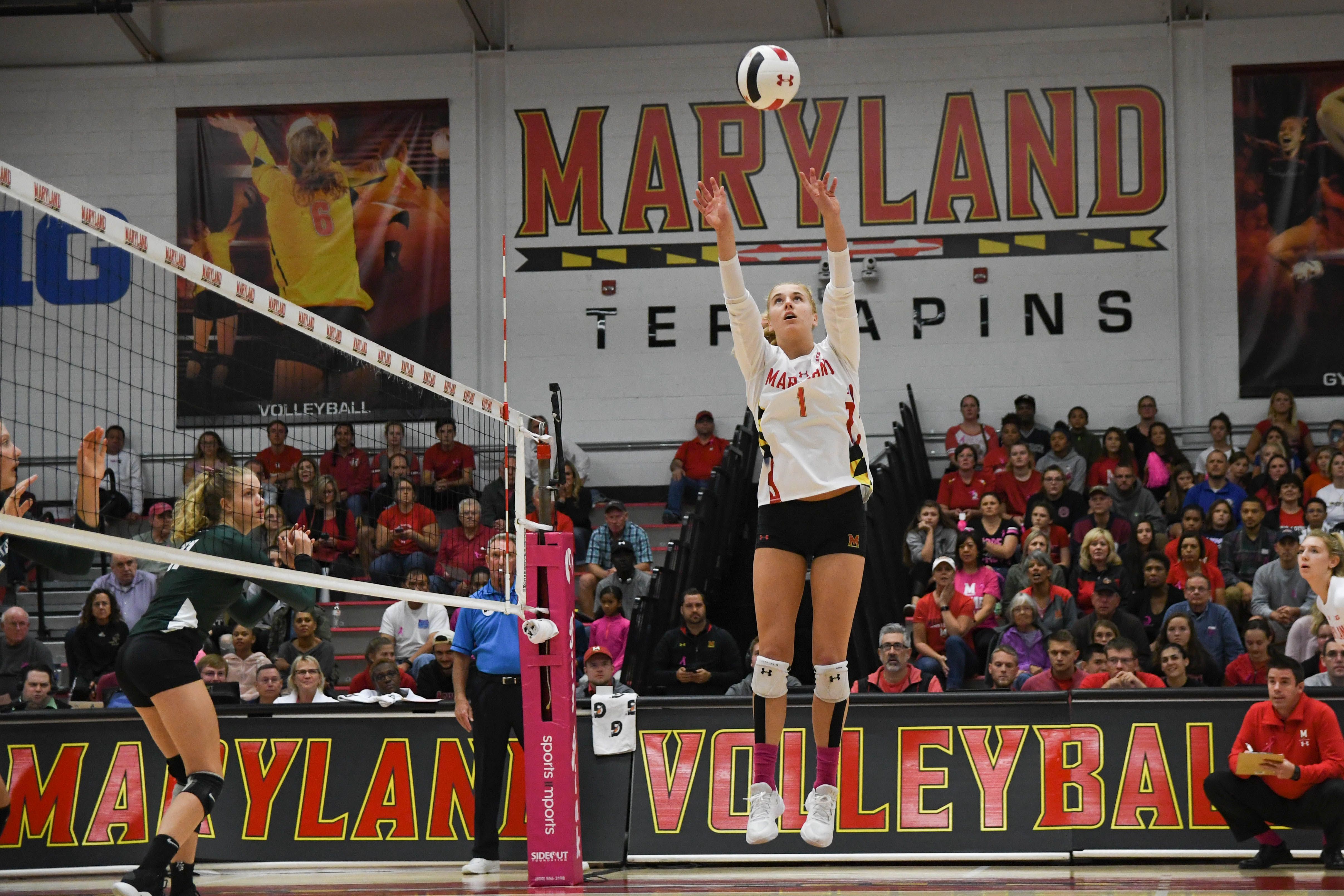 For most of the first four weeks of Maryland volleyball’s season, setter and team captain Nicole Alford was forced to help the team from the sidelines due to a preseason foot injury. Alford was still vital to her team’s success while she was injured, but her value is most strongly felt on the court.

The Terps went 6-3 in her absence, spanning three nonconference tournaments. The junior transferred before the 2018 campaign, and went on to start all 32 matches for Maryland last year.

On Friday night, Alford returned to the court for the Gamecock Invitational after less than a week of practice. She was a key contributor for the Terps during the 2-1 weekend, splitting time at setter as she eased back into match play.

“Nicole is really great,” coach Adam Hughes said. “She’s good at communicating, and she gives us that on the floor.”

When Alford was out, setter Samantha Snyder stepped in. Snyder played in all 41 sets and totaled 211 assists during Maryland’s first nine matches.

At the Gamecock Invitational, though, Alford and Snyder both featured at setter. And in 11 sets, Snyder tallied 44 assists while Alford notched 57.

Alford, however, admits that she didn’t quite feel 100 percent.

“I’m still pretty limited in how much I’m jumping and how much I’m allowed to play,” Alford said. “It comes with trusting in myself that I may be behind, but I can catch back up quickly.”

Much like her co-captain middle blocker Katie Myers, Alford believes seeing the game from a different perspective is a formative experience. Myers has missed considerable time during her college career due to knee injuries.

“I think my time on the sideline was hard, but it was good,” Alford said. “There were things that I got to see that are hard to see when you’re in the mix of it. I got to learn a little bit more about my teammates from a different standpoint than I had before.”

Hughes’ squad typically runs a different formation when Alford is fully fit, using a 5-1 instead of a 6-2 rotation to highlight Alford’s all-around ability as the lone setter on the floor. The coach expects to switch back to the 5-1 in the future.

And with Alford back on the court this weekend, her teammates were reminded of the Annapolis native’s capabilities. In 114 sets last year, Alford posted 1,117 assists.

“Nicole brought a lot of energy that we had been missing a little bit.” Myers said. “Her encouraging words out on the court are what we’re used to.”

Alford returns to the team just before the Big Ten slate begins. She and the Terps will have two days of practice before facing Ohio State on Wednesday and traveling to Michigan State on Saturday.

And with Alford back on the floor, Maryland feels confident in its ability to compete in the conference.

“I’m happy we’re slowly bringing her back up to speed,” Hughes said. “Overall, we’re still making progress, and we’re nowhere near where our cap can be.”