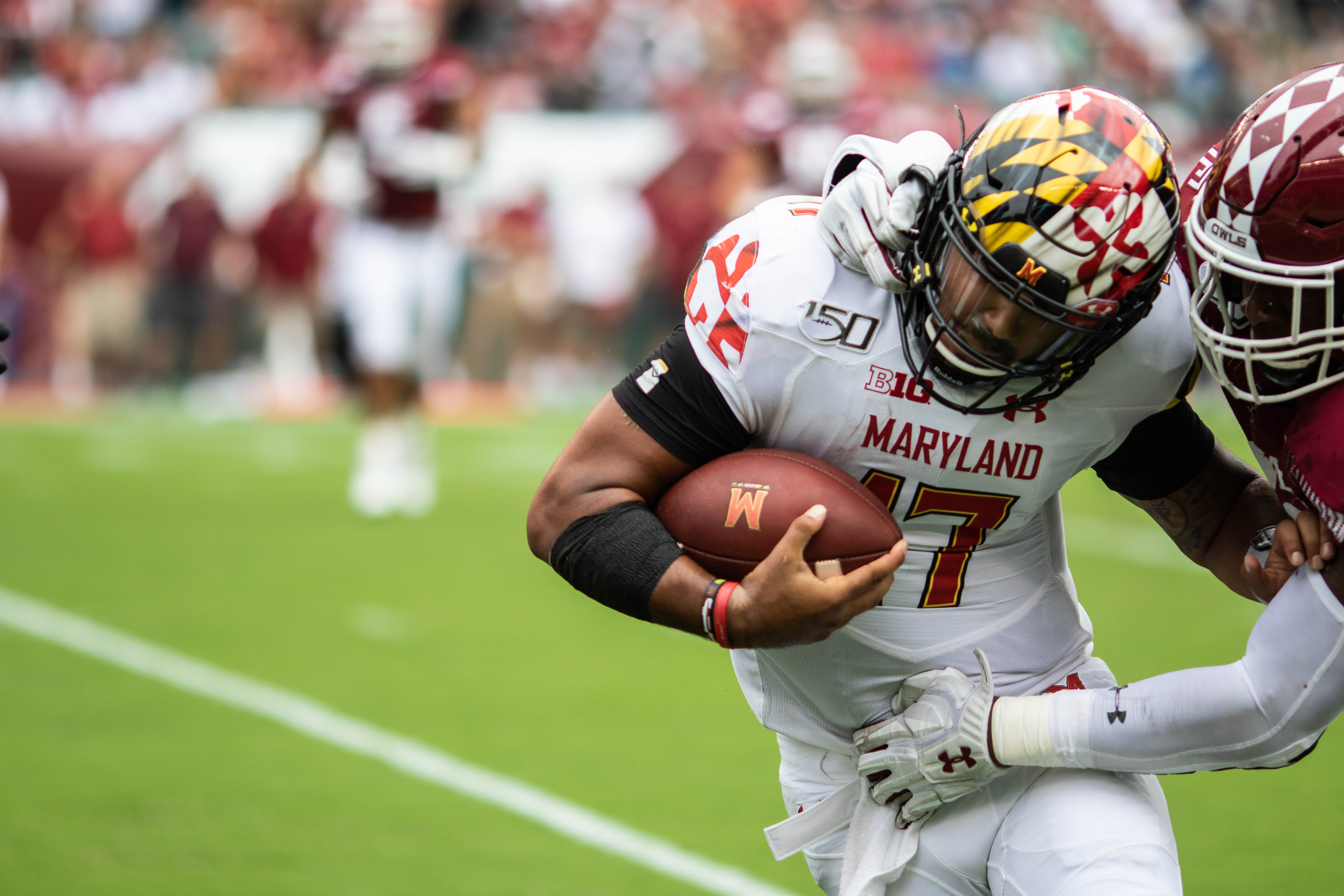 Quarterback Josh Jackson is dragged down during Maryland football's 20-17 loss to Temple at Lincoln Financial Field in Philadelphia on Sept. 14, 2019. (Julia Nikhinson/The Diamondback)

The opportunity was there for quarterback Josh Jackson, even at the end of a game gone awry for Maryland football.

On first-and-goal with just over three minutes remaining against Temple, tight end Tyler Mabry cut toward the back pylon, running a corner route that drew two defenders to his area. That left tight end Chigoziem Okonkwo free on his post route, with an abundance of space in the endzone to steal a win from the Owls.

Jackson made the right read and unleashed the pass, even with blindside pressure barreling down on him. But the throw sailed up and out of Okonkwo’s reach, falling harmlessly to the grass at Lincoln Financial Field. It wasn’t the end of the Terps’ chances. But it was the best one gone by.

“First play was to Chig, and I missed him,” Jackson said postgame. “That should be it, right? If I hit the first one.”

That incompletion, one of 23 misfires in Maryland’s 20-17 loss, encapsulated Jackson’s struggles. He threw an interception to end the first drive, and his accuracy was spotty at best the rest of the way.

So coach Mike Locksley’s task during the bye week — in addition to the myriad of other issues that beleaguered the Terps on Saturday — will be to get Jackson looking more like the quarterback who led his team to 142 points in its first two games rather than the one who missed open targets like Okonkwo against Temple.

“I just think he had one of those games where he kind of got off of his rhythm,” Locksley said Tuesday. “And when a quarterback gets that way, you’ve got to figure out how to get him back on track.”

Maryland’s principal skillset is its running backs, with four different ballcarriers already finding the endzone this season. But Jackson’s play was paramount to the breakout offensive performances in wins over Howard and Syracuse. And to prevent teams from loading the box to defend against the run as Big Ten play approaches, Jackson will be key.

When the Bison decided to counteract the Terps’ running game with a Cover 0 defensive scheme, leaving receivers in one-on-one coverage, Jackson torched them. He threw for 245 yards and four touchdowns, all in the first half of the Week 1 blowout.

Jackson followed that up with three more touchdowns and 296 passing yards against the Orange. But in both matchups, there were underlying issues. Locksley wanted him to make decisions more quickly when facing Howard. And despite speeding up the following week, the graduate transfer threw his first interception for Maryland.

Those minor mishaps didn’t matter in runaway victories. But his misfires in Philadelphia proved costly.

“Obviously, first drive I throw a pick, which was all my fault. It was just a horrible ball,” Jackson said Saturday. “It all comes back to me. I have to execute better.”

As Jackson struggled early, Locksley said he tried to refocus his gunslinger between drives, asking as he came off the field what he was looking at or if he saw the safeties. And when it became apparent Jackson was off, the Terps cut some of their run-pass option plays to lighten his load.

Jackson came back with a solid first drive after halftime, resulting in running back Anthony McFarland’s 4-yard score. Later in the third quarter, Jackson hit Mabry for a touchdown.

Still, down by five with the game on the line, Jackson had a chance to nullify what had gone wrong up to that point with a game-winning score. Instead, he overthrew Okonkwo and led wideout DJ Turner too far on his final throw, squandering an opportunity to remain undefeated.

So during Maryland’s early bye week, the focus will be on making sure Saturday’s display remains an anomaly from an otherwise crisp quarterback.

“Sometimes guys have bad games,” Locksley said. “We’ll get some things cleaned up this week and he’ll be ready to go come Penn State week.”