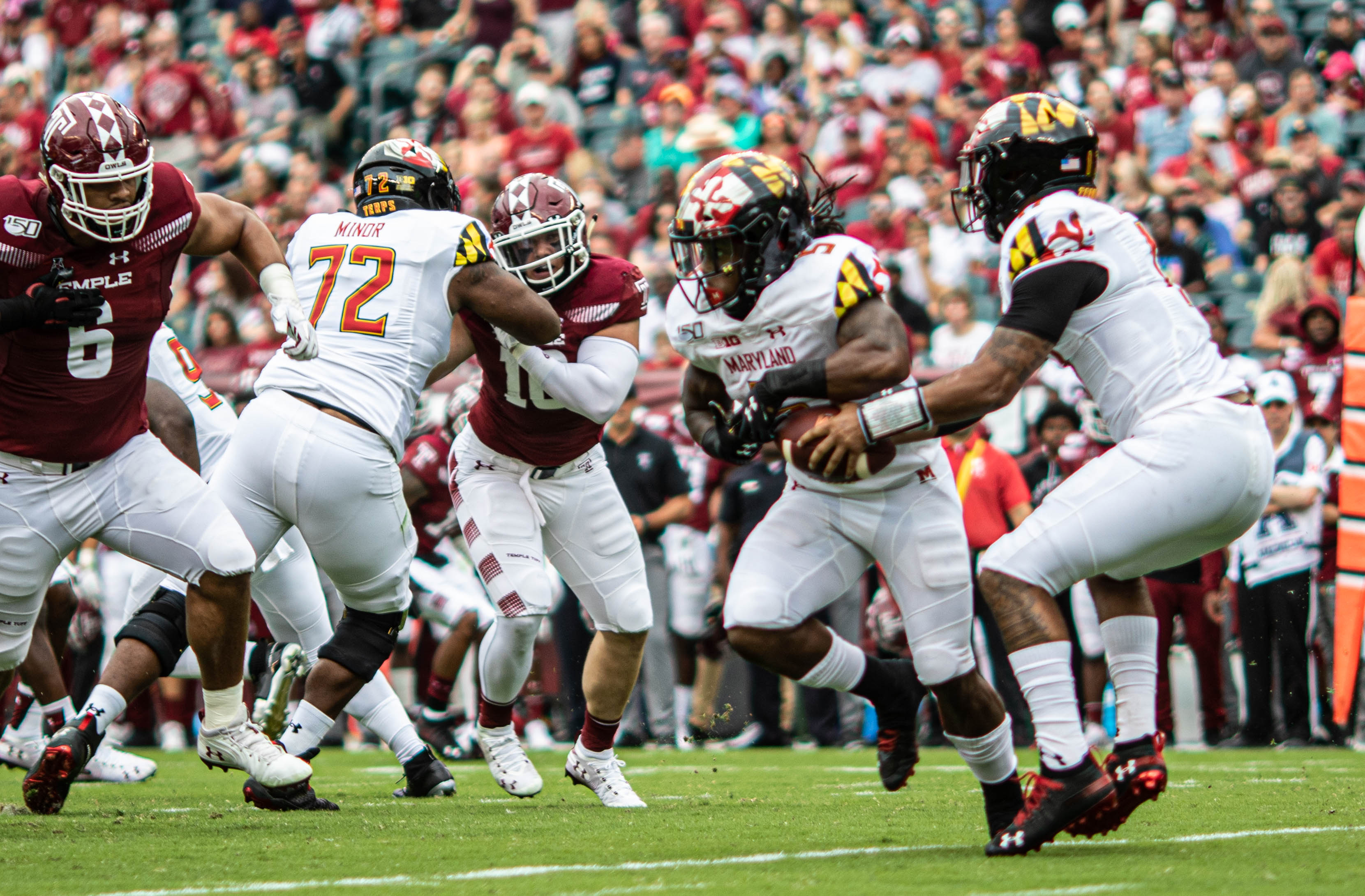 PHILADELPHIA — Anthony McFarland didn’t have much of a chance. Not with Temple linebacker Shaun Bradley shooting through the gap, looming in the backfield to meet the Maryland football running back as he received the handoff.

On fourth-and-goal from the 1-yard-line, McFarland found himself enveloped by Bradley, who had earned first-team All-American Athletic Conference honors last year with the Owls. And after dropping McFarland for a loss with just over three minutes to play Saturday, Bradley skipped his way toward Temple’s bench before stopping to turn back toward the line of scrimmage and flex his arms.

In the trenches at Lincoln Financial Field, the Owls outmuscled Maryland with regularity. It shouldn’t have come down to that fourth-down attempt with McFarland — or another fourth-and-goal miss from quarterback Josh Jackson not much later. But the Terps’ inability to convert from short range proved fatal in their 20-17 defeat.

“We need to be able to be physical enough to line up and give the ball to Anthony McFarland and get a yard,” coach Mike Locksley said. “Any team that I coach, we’re going to be a team that has to have the ability to punch it in.”

Earlier in the game, when these miscues still seemed minor, Maryland lined up on the 2-yard line and handed off to McFarland. He made it to the 1. And when the Terps’ offense remained  on fourth-and-goal from there, there was little doubt about who’d get the handoff.

McFarland had scored two short-yardage touchdowns against Howard, and added two more last week against then-No. 21 Syracuse: one from 20-yards out, another from three. The DeMatha product also powered through in a 4-yard score in the third quarter against Temple.

But when he received the handoff in the first quarter Saturday, the Owls had broken through the line again. And instead of finding the endzone, the redshirt sophomore found defensive tackle Ifeanyi Maijeh’s waiting arms, crushing him for a 1-yard loss and a turnover on downs.

“Ultimately, when we give the ball to [McFarland], and we have it down inside the 1-yard line, we’ve got to have enough wherewithal to be able to cover people up, run off the football, make sure we don’t allow penetration and let Ant do what he does,” Locksley said. “He’s usually a strong inside runner. He got hit in the backfield two times, and that’s disappointing.”

McFarland getting stuffed wasn’t the Terps’ only problem in their loss on Saturday. Late in the second quarter, right guard Terrance Davis went down with a knee injury, and Locksley said after the game that they’d need to wait for tests to conclude the severity. In his place, redshirt freshman Austin Fontaine entered.

Fontaine had been switched from the defensive line to the offense during spring camp, playing 50 snaps in two games before filling in Saturday. But Locksley made it clear after the loss that he wouldn’t be using Davis’ absence as a scapegoat for the challenges of running inside. And he was right — McFarland was still stuffed when Davis was in the game on the first-quarter opportunity.

“As a team, we just didn’t execute,” McFarland said. “Just everything that comes with football — missing blocks, missing assignments, just everything.”

So, despite a potent rushing attack serving as Maryland’s bread and butter and its plethora of running backs forming the strongest positional unit on the team, Locksley’s squad couldn’t get it done. It couldn’t get the necessary push inside and couldn’t seal off the Temple rushers on two fourth-and-goal tries from the 1-yard line.

And it allowed for Bradley, who finished with eight tackles, to stop and flex after his most pivotal one.

“Our defensive line played excellent today, getting pushback, and they created a lane for me,” Bradley said. “[I] was like a kid with toys on Christmas.”