“Like a Swiss Army knife:” Ellis McKennie fills in wherever Maryland football needs him 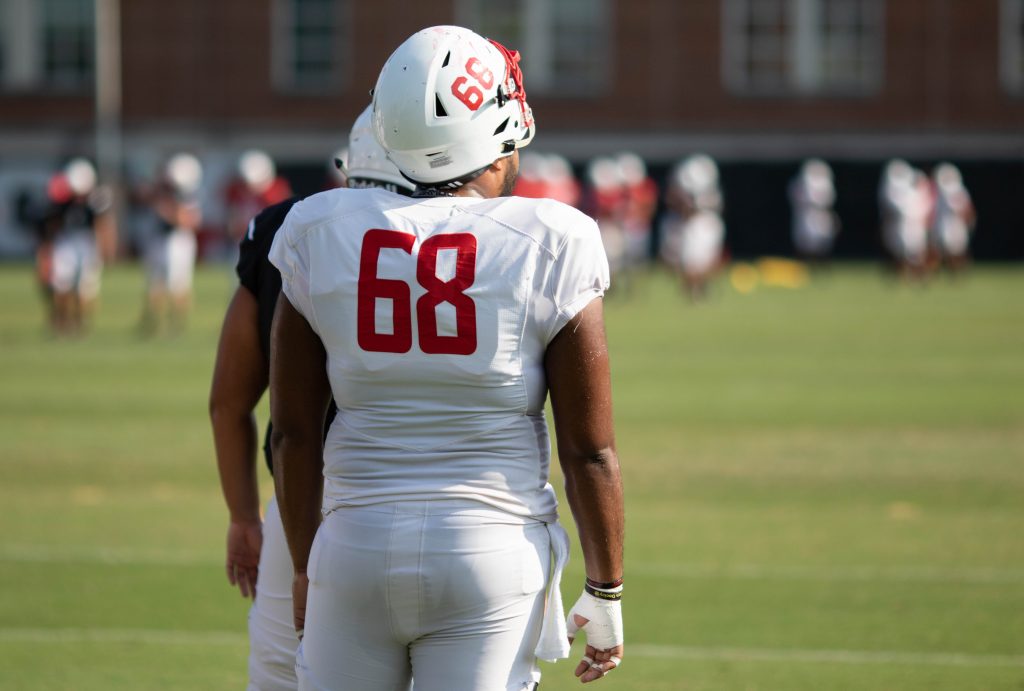 On Maryland football’s third drive of Saturday’s eventual 63-20 dismantling of then-No. 21 Syracuse, Ellis McKennie hunched over with his hand planted on the ball, peering between his legs before firing the snap to quarterback Josh Jackson.

McKennie was called upon again on the next series. This time, though, he lined up at left tackle. And late in the third quarter, the senior found himself on the opposite side of the line as a right tackle, again protecting Jackson from a pass rush but this time from a different point of view, a new matchup facing him from across the line of scrimmage.

McKennie can play anywhere along the offensive line, and for a team that had concerns entering the season about its interior depth, McKennie’s versatility is an asset. The McDonogh School graduate offers an ability for coach Mike Locksley to rotate up front. And as the Terps have piled on points and racked up offensive output through the first two weeks, McKennie has ensured durability issues haven’t arisen early.

“He’s like a Swiss Army knife, in that he does so many things,” Locksley said after Saturday’s contest. “He’s like a sixth starter.”

In Maryland’s season-opening 79-0 win over Howard, McKennie started and featured for 30 snaps at left tackle. But against the Orange, redshirt freshman Jaelyn Duncan received his first career start, pushing McKennie into utility service.

McKennie played 22 snaps at center, 13 at left tackle and another 13 at right tackle. And while he factored into a left-sided breakdown early in the second quarter — ending with Jackson on the ground for an eight-yard sack — McKennie has maneuvered between the positions with relative ease.

“He can go from center to right tackle, to guard, to left tackle — you know, he can play anything,” Jackson said. “That does nothing but help you.”

In the buildup to a game, McKennie learns where he’ll be plugged in along the line, leaving little surprise for what roles he will assume come each Saturday.

Being adaptable to change is nothing new for McKennie. He remembers an opening at the tackle position at spring camp a few years ago. He took it. And when Maryland was short on centers, he learned how to snap. So despite initially joining the Terps as a guard, the McSherrytown, Pennsylvania, native hasn’t shied away from new positions.

When coaches ask what positions he can play, he replies, “Oh, well, all of them.”

Last year, various injuries forced the Terps’ offensive line to reshuffle. But the depth provided cover for the inevitable bumps and bruises — and, at times, something more severe — that come with playing in the trenches.

With the departures of Brendan Moore, Damian Prince and Derwin Gray from 2018’s offensive line, Locksley doesn’t have that luxury this season. During the offseason, he instead opted to switch defensive linemen Austin Fontaine and Breyon Gaddy to the offensive side of the ball to supplement a lineup returning just two starters.

That inexperience has only made McKennie, a fifth-year senior, all the more valuable.

“As an older guy, I’ve got a better handle on offenses now, especially the offense that we have here,” McKennie said. “Switching back and forth isn’t as challenging for me as it might be for other guys, so I have to take advantage of that role and definitely embrace it.”