While the outside world may be surprised by Maryland football’s success, the team isn’t 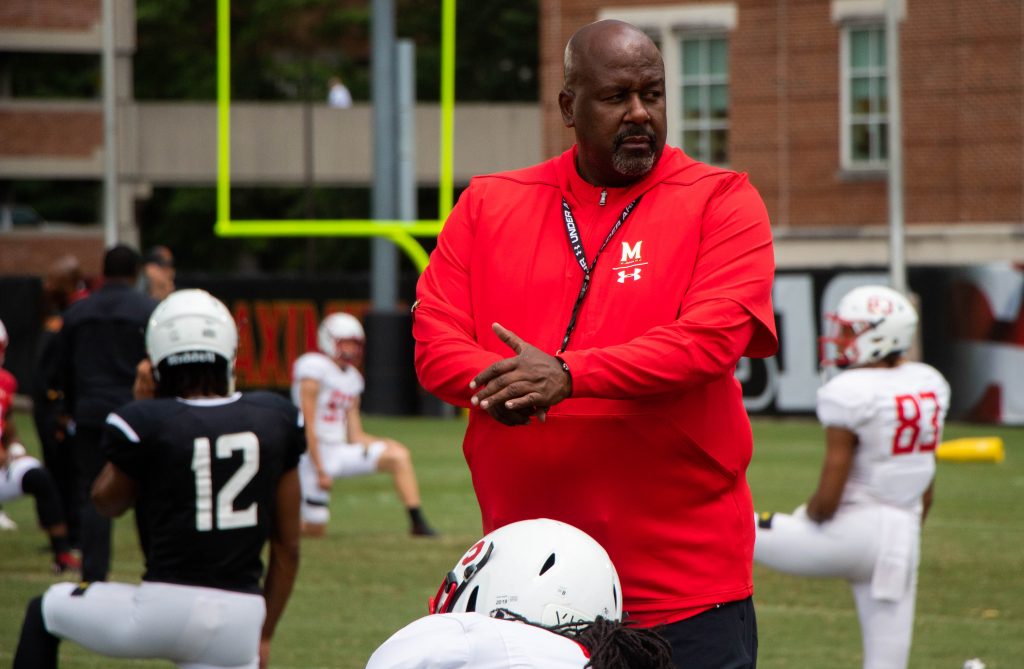 Two days after another blowout win, and just one after Maryland football vaulted into the top-25 rankings for the first time since 2013, coach Mike Locksley asked his team if anyone was surprised with how they were doing.

No one raised their hand.

In the early stages of Locksley’s first year, players have noticed changes around the program. And while an undefeated start does wonders to a team’s morale, players feel the results in the Terps’ first two games are products of a routine set throughout the offseason — from forging a positive mindset to increased discipline, tight end Chigoziem Okonkwo said.

So heading into a matchup with Temple on Saturday, Maryland believes maintaining what’s been working so far — the execution in practice, the “little things” — will create further success. And against an opponent that derailed a 2-0 start last year, the Terps will look to continue what they deem a thoroughly unsurprising start.

“Why would you do something different this week that you didn’t do in Week 1 or 2?” Locksley said. “With the right kind of habits, Saturday usually takes care of itself.”

After beating Texas in their 2018 season opener and following it up with a win at Bowling Green, the Terps entered their contest against Temple undefeated. But last year featured different circumstances.

Offensive lineman Jordan McNair died June 13, 2018, following heatstroke he suffered two weeks earlier at an organized team workout. Coach DJ Durkin and other staffers were placed on leave, and interim head coach Matt Canada attempted to steer the team toward any form of normalcy he could.

It was a supreme challenge. And at times, Maryland’s on-field play seemed to be affected by the off-field chaos.

“Last year, I don’t think everyone bought in,” Okonkwo said.

Still, a one-point loss to then-No. 9 Ohio State on Nov. 17, 2018, gave a hint to a team well-versed in losing to the Big Ten’s biggest teams that it might be able to punch above its weight.

“When we did that [against the Buckeyes], it just made us have that confidence,” Okonkwo said. “That game was what really opened our eyes and made us say, ‘Come on guys, let’s go do this. We can do this. We have the team to do it.’”

Since Locksley joined and brought a slew of graduate transfers with him — Shaq Smith from Clemson, Keandre Jones from Ohio State, Josh Jackson from Virginia Tech and Tyler Mabry from Buffalo — players believe the tide’s changing.

It starts with that consistency aspect, be it on the field or elsewhere. Locksley recalled Wednesday how Mabry ran extra routes throughout the offseason, and while he was by himself initially, his teammates soon joined him as the summer went on. And Smith, after seeing the mess of a locker from the player next to him, told his teammate he needed to keep his belongings tidier, ready to show off to a potential recruit.

The tendencies brought over from programs such as Clemson and Ohio State have left an impression on the Terps.

“It starts in practice,” Jones said. “Just showing these guys how to work hard in practice and just continue to do the little things right, which I think we’ve been able to do here for the last two weeks.”

Temple will be a challenge once more, one year after a 35-14 defeat began a 3-7 finish to Maryland’s season. But this time around, the Terps feel their fast start to 2019 and leap to No. 21 in the rankings won’t be sidetracked, so long as they continue to execute.

And even if those outside the program are surprised with how Maryland has shot out of the gate, the team isn’t. Offensive lineman Ellis McKennie thought back to a video the team watched during training camp of a Russell Wilson interview. When the Seattle Seahawks quarterback was asked if he was excited to prove his doubters wrong, he replied that he instead was focused on proving he and his team were doing things right.

It’s the same energy the Terps are channeling.