“This is not the end”: UMD community members hold rally to save the Co-op 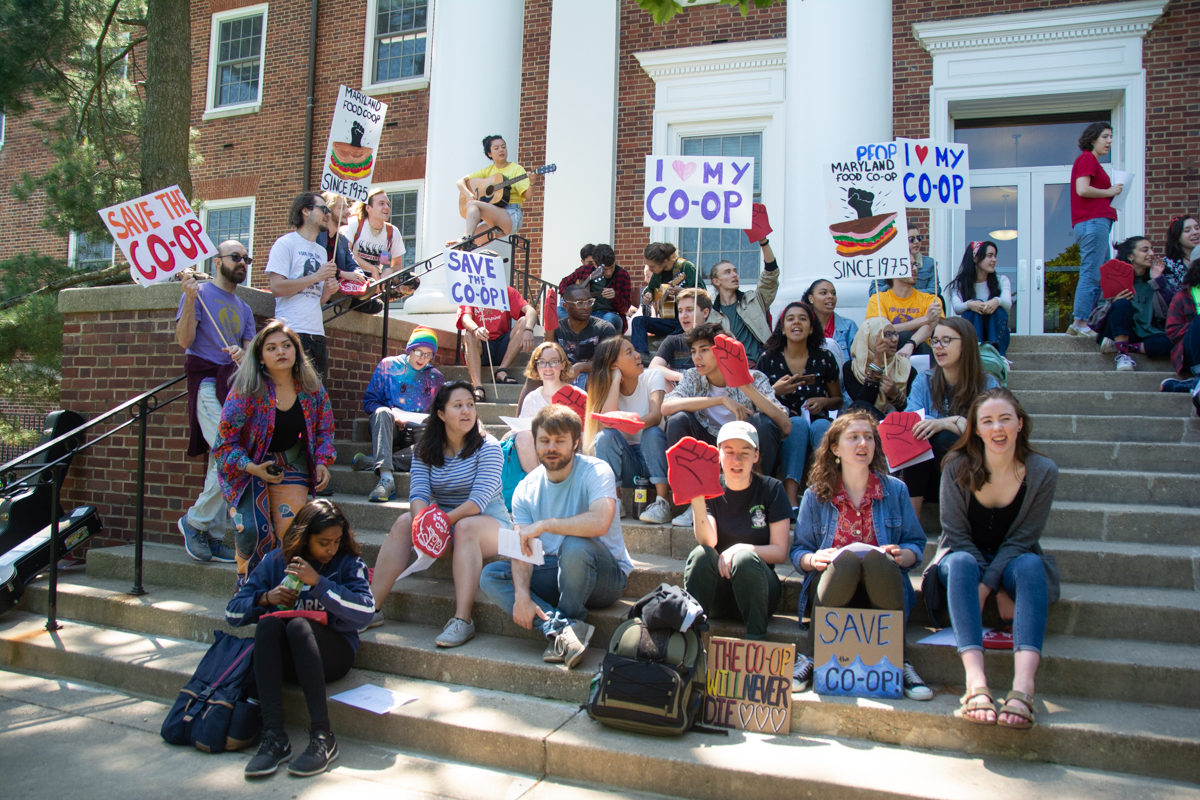 University of Maryland community members rallied on the steps of the Mitchell Building on May 15 to protest the closure of the Maryland Food Co-op. (Jillian Atelsek/The Diamondback)

Ronnie Lyles stood crying in the back of the Maryland Food Co-op’s kitchen one day in 2017.

He had just arrived late to his shift as a worker-owner in the student-run collective, but something else was on his mind: He was afraid to tell his coworkers he was bisexual.

When he did, though, he was greeted with a group hug.

“They all just made me feel very comfortable,” the senior history major said, “and not ashamed to be who I really am.”

Lyles recounted that story to a crowd of about 60 people gathered on the steps of the University of Maryland’s Mitchell Building on Wednesday morning, in a rally to save the Co-op before it closes permanently — arguing that the sandwich shop also serves as a vital space for marginalized students and activists on the campus.

Attendees brandished foam fists and signs with phrases such as “save the Co-op” and “the Co-op will never die.” They ate breakfast burritos and home fries, and listened to students, faculty and alumni share stories about the business — punctuated now and then by music as a group with guitars and drums led the crowd in folk songs.

The rally took place while a group of students representing the Co-op met with student affairs vice president Linda Clement and assistant vice president John Zacker to discuss its future. Though its last day of normal operation was Tuesday, the worker-owned cooperative — which has been housed in Stamp Student Union since 1975 — is set to officially shutter May 31.

Debt problems have plagued the Co-op for years. Though it brought in enough funds to pay off the about $8,500 it owed to the state, the business still owes Stamp about $40,000 — not including the money it owes vendors.

But even though the Co-op plans to sell everything it has left Thursday and Friday, and clean out its store in the coming weeks, worker-owners and customers maintain hope that the university will reverse course.

Speakers at the rally emphasized the role they said the business — which serves as a space for open-mic nights and meetings for student groups — plays in creating a sense of community on the campus.

Dorian Blue, a senior English major, called the Co-op “one of the only places on this campus where students can feel safe, nourished and socially fulfilled all at once.”

Shortly after President Trump was elected in November 2016, Blue said they were feeling discouraged and afraid — but they found solace at the Co-op.

“I felt the community wrap around me in a way that I couldn’t have even expected,” they said. “I felt hope. I felt love. I felt such power and such activism in that space.”

Blue ended their speech — which was interrupted by cheers from the crowd — by pointing the megaphone toward the building, where Clement and Zacker were meeting with students.

“I want to know the administration hears us when we say that we need the Co-op,” they shouted.

Brennan said he came out of the meeting optimistic.

“We presented a lot of information to them that I think is really going to force them to reevaluate the decision,” he said.

Earlier this month, the Co-op launched a last-ditch campaign, calling for donors to stop giving money to this university if the business is closed and continue resisting until an alternative student-run cooperative is secured.

As of Wednesday evening, over 3,000 people had signed onto the petition.

Speakers at the rally discussed potential ways to draw more customers to the Co-op, including altering their business model, recruiting volunteers and devising new marketing campaigns. But if all else fails, they said, they remain committed to establishing an alternative community space, on or off the campus.

Michael Fekula, 62, attended this university in 1975 — the year of the Co-op’s founding. He recalled that the business’ founders set up tables in front of Stamp every day, selling sandwiches and advocating for a space in the building. He’d later become a regular customer and volunteer.

Fekula, who later went on to work on the campus for eight years, still lives in College Park, and still occasionally eats at the Co-op. He came to the rally because he’d be sad to see it go.

“It would break my heart,” he said.

Co-op leaders are working on setting up another meeting with administrators, Brennan said — and aren’t giving up on their cause.

“I truly believe that this is not the end,” Blue said. “We have more work to do on this campus.”