UMD’s facilities are a disaster. Administration must fix them. 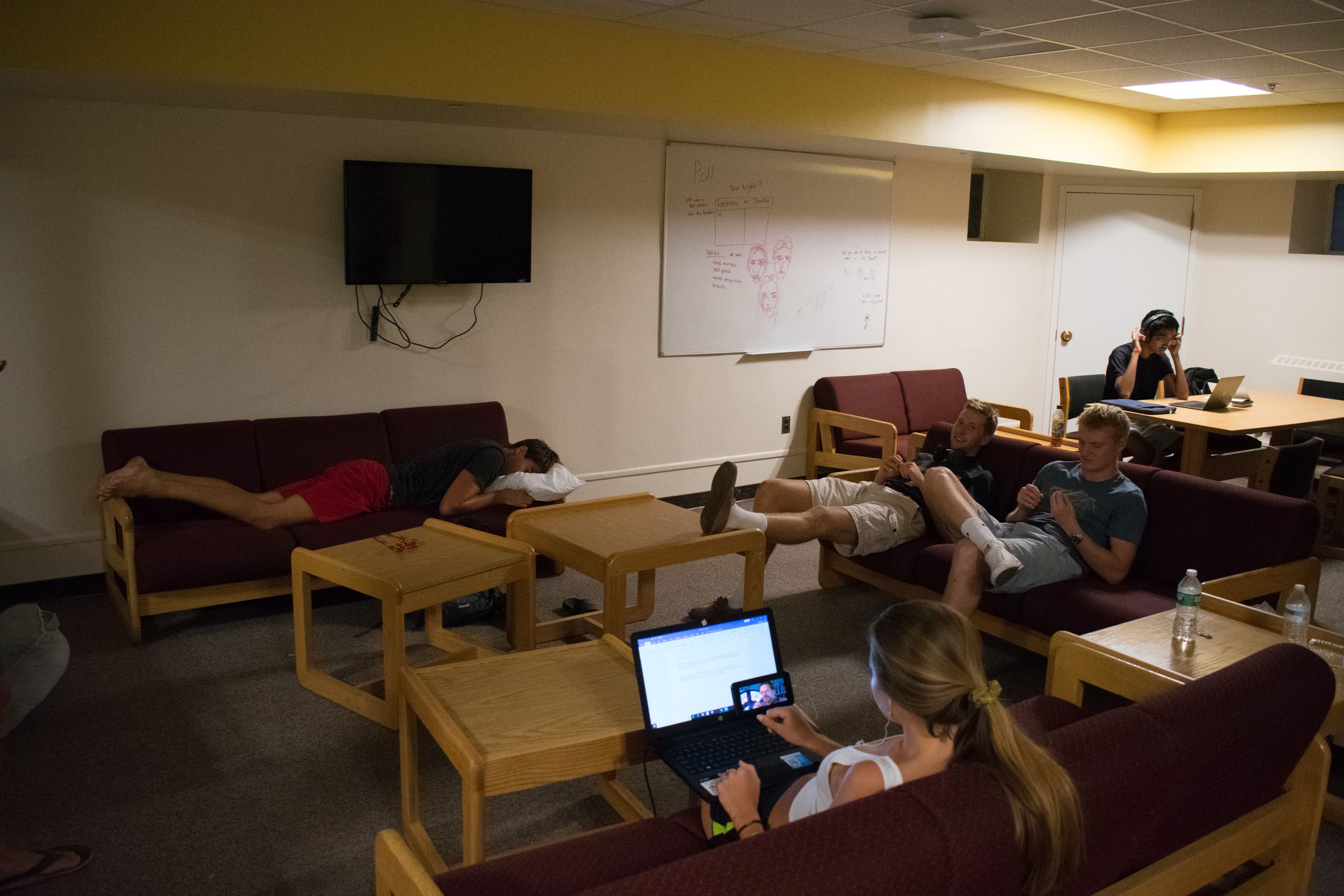 Students gathered and slept in an air-conditioned lounge of Wicomico Hall to escape the heat. (Elliot Scarangello / The Diamondback)

There are some questions that everyone must confront at some point in their lives: Why am I here? Is there a God? What am I having for lunch today? For students at the University of Maryland, however, one question towers over the rest: Why is this university infested with dysfunctional automatic sinks?

More than once this semester, I have had to use the men’s bathroom on the bottom floor of Francis Scott Key Hall (though I’ve encountered this issue in almost every building on this campus). When it comes time to wash my hands, I have to play the world’s dumbest game of chance. The game works like this: You rub your hands together in front of the little dark red spot that marks the infrared sensor. If you’re lucky, water comes out of the faucet for about 2 seconds. Depending on just how bad your luck is, though, you then either have to move your hands right in front of the sensor again — or, if you’re really unlucky, use another sink entirely.

Dr. David McBride, director of the University Health Center, regularly sends campuswide emails urging students to avoid disease by, among other things, thoroughly washing their hands. It would be a lot easier to follow this excellent advice if every sink on this campus reliably dispensed water. Instead, finding an automatic sink that keeps the water going until you move your hands away is like finding water in the desert. When I find one, I say a prayer of thankfulness to God — he has seen fit to bless me, unworthy as I am of his great mercy.

This university’s facilities problems go well beyond sinks. The Clarice Smith Performing Arts Center — one of the nicer buildings on this campus — does not seem to have a working climate control system. Even in the winter, the choir rehearsal room regularly feels like a sauna, which makes rehearsals uncomfortable in late fall and winter and downright unpleasant in early fall and spring. A different rehearsal room, however, almost always feels like a walk-in freezer. This seems like a solvable problem — yet it has not been solved in the four years I’ve been in choirs here.

At least The Clarice has air conditioning, even if it doesn’t work correctly. Eight dorms — eight! — do not. There are plans to demolish some of them, but they’re on hold. Meanwhile, at the beginning of the fall semester, students were sleeping in air-conditioned common areas because it was, to quote one student, “hot as shit” in the dorm rooms without air conditioning.

Even the newest buildings seem to have been designed without regard for the simplest of student needs. The brand-new Iribe Center has a ton of bizarre glass flaps covered in dots waving off the side of the building. You know what it doesn’t have? Power outlets. There are, without exaggeration, none in the central common areas as far as I can tell. It’s a truly mystifying decision for a building that the university promotes as “a hub for… collaboration”. How does one design a building for computer science without making power outlets widely accessible? Don’t get me wrong, I’m very glad the computer science department has a new building. We desperately needed the space. But is it asking too much to ask for a building that was not designed by aliens? Let’s not even get into the fact that somehow, more than 20 years after the invention of Wi-Fi, this university’s wireless network is still unreliable.

This is not a criticism of maintenance staff. As my colleague, Kevin Hu, wrote earlier this week, this university’s janitorial staff has a difficult job to begin with, and many of us only make their lives harder. The same is true of facilities and maintenance workers. Yet, this university’s administration repays their hard work by getting them sick, shaming them for speaking their native languages and allegedly giving them the worst, most dangerous jobs because of their race.

The university’s facilities are maintained rather well. It is not as if the custodians are choosing the sinks to install or designing the air conditioning system in The Clarice, let alone determining how many outlets should go in the Iribe Center. Administrative figures — bureaucrats with no sense of, or regard for, student and faculty needs — make these decisions. We can do better. As a search committee begins to look for university President Wallace Loh’s replacement, I suggest it asks a basic question about every candidate: Will this candidate fix this university’s basic facilities, or will they instead just give us more Iribe Centers?

We don’t need more buildings that look like Westworld sets — but a few working sinks would be nice.