UMD housekeeping staff endures a lot. We should make their job easier. 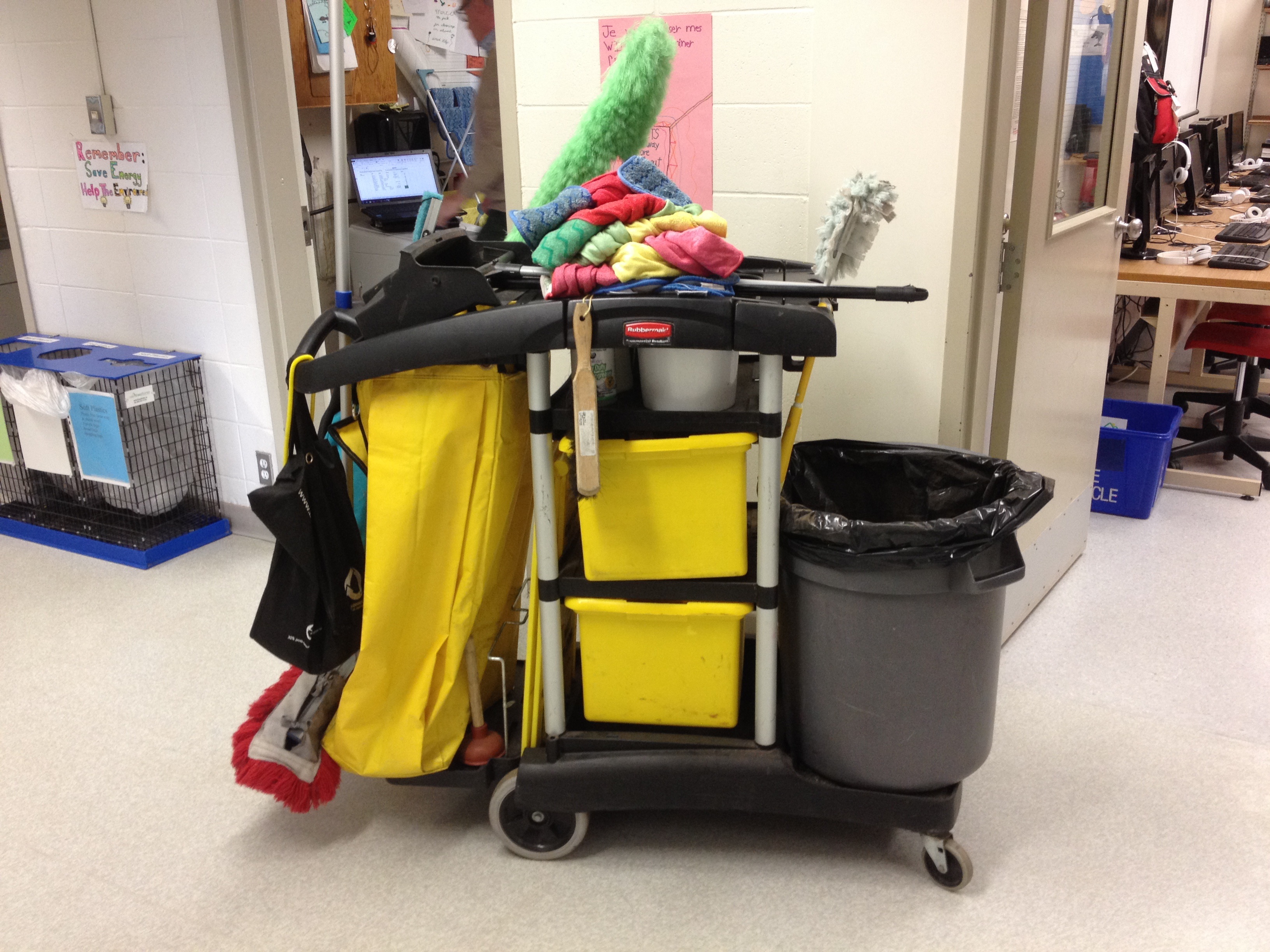 Cleaning equipment on a cart. Photo courtesy of PxHere.

If you’re like most students living in dorms, you probably empty the remnants of your late-night munchies into trash cans conveniently located in your floor’s hallway. In fact, you’ve probably never hesitated to do so — that’s what they’re there for.

This act seems inconsequential, but it can create a significant burden for the janitorial staff. The steady stream of personal trash causes hallway trash cans to fill up quickly. As a result, staff members make frequent trips to the dumpsters, carrying bulging and overflowing trash and compost bags. Not only is this is an unnecessary inconvenience, but some of the items that we automatically chuck into these bins can actually be recycled.

Campus janitorial staff — especially those situated in residence halls — are some of the greatest unsung heroes of our college lives, and we don’t do enough to appreciate them. They’re tasked with taking care of some of our most basic needs, a feat arguably only matched in difficulty by professors dealing with grade inquiries during finals season.

When students return home from a long night out, for example, they may have ingested alcohol. They may feel a little — or very — lightheaded. They may make a direct line for the toilet, desperately trying to cover as much ground as possible with each step. And unfortunately, they may not make it to the toilet, instead splattering their insides across the white exterior of the bathroom sink and leaving a pleasant surprise for their floormates.

They call a custodian, who spends 20 minutes scrubbing and polishing the sink as the putrid smell of vomit lingers in the bathroom. Should the student feel guilty?

Definitely. I can’t count the number of times I’ve attempted to use a communal restroom without inadvertently triggering my gag reflex, only to witness the poor janitor on duty tirelessly working to unclog the sink.

Not only do this university’s custodians have to deal with the inevitable consequences of being around college students, they are often involved in practically every other task to ensure our safety on campus. Behind the scenes, they’re involved in physically strenuous activities — including lifting, pulling and pushing heavy objects — that all pose a serious risk of injury. In addition, custodians are often exposed to a variety of dangerous chemicals such as those in pesticides and mold, putting them at risk for occupational diseases.

It infuriates me when people dismiss the notion of treating the janitorial staff better and claim that it’s the staff’s job to clean up after us. I can probably assume that most of us college students have worked part-time — most likely in fast food or retail — at least at some point in our lives. Just because it was our job to serve fast food, doesn’t mean we deserve public belittlement from that one irate customer who didn’t get the sauce he wanted. While the janitorial staff is obliged to tidy up our messes, that doesn’t give us a free pass to be recklessly irresponsible.

As the semester winds down, I implore everyone to try to build a better relationship with our janitorial staff. If that means making the extra two-minute hike to the dumpster outside, so be it. Or, if there are plans to go out on a Friday night, maybe try not to be incapacitated to the point where distinguishing between the toilet and shower stalls becomes impossible.