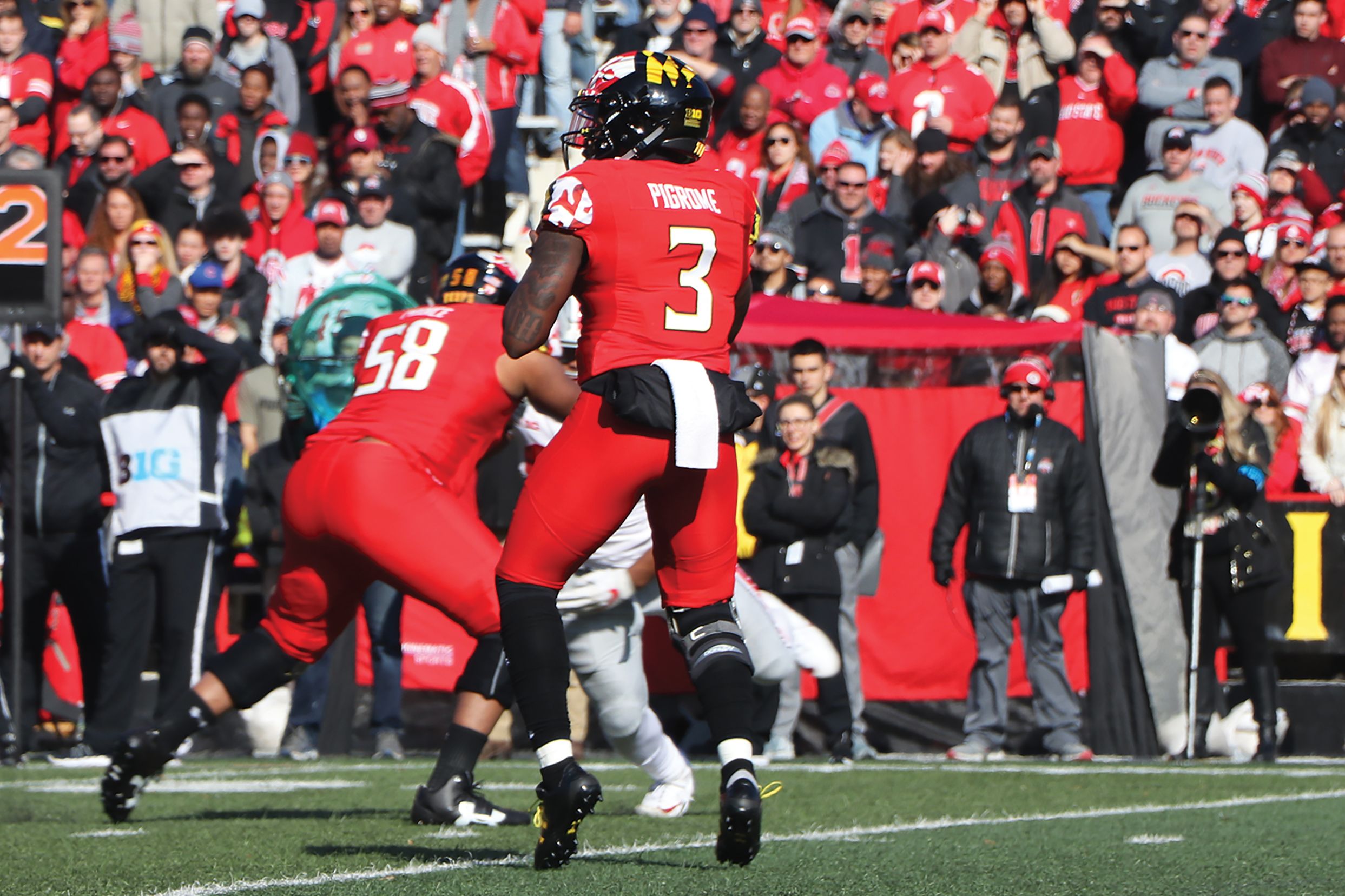 As the ball whizzed past wide receiver Jeshaun Jones’ outstretched left hand in the east end zone at Maryland Stadium, Maryland football’s postseason hopes fell by the wayside, too.

In overtime against No. 9 Ohio State, interim head coach Matt Canada had elected to go for a game-winning two-point conversion rather than force a second overtime with an extra point. But when quarterback Tyrrell Pigrome rolled right and was pressured with a defender in his face, Jones stopped in a soft spot in the coverage rather than tracking the gunslinger out wide. Pigrome’s pass led him too far to the right, and Maryland fell, 52-51.

Jones dropped to the turf, face down, hands on his helmet. Pigrome kept running toward the sideline.

Five months later, that play — so close to a stunning upset that would’ve clinched bowl eligibility — continues to resonate deeply for quarterback and receiver.

“I’m still not over it,” Pigrome said. “That was the game that could’ve taken us to a bowl game, you know what I’m saying?”

Early in the game, so much had gone right for the Terps. Running back Anthony McFarland broke off an 81-yard score, then followed with a 75-yard gallop that helped build a commanding 17-3 lead by the end of the first quarter, putting Maryland in position for the best win of a season filled with off-field turmoil and on-field inconsistency.

Pigrome, filling in for the injured Kasim Hill under center, supplemented the Terps’ running attack by completing six of 13 passes for 181 yards and a touchdown. His 13th attempt going awry, though, wiped away all the good that came before it.

“That one play just — it hurts,” Pigrome said. “Like, it still hurts.”

Canada met with Pigrome the week after the Buckeyes loss, stressing the need to leave that disappointment in the past with one more game remaining and bowl eligibility on the line. But Maryland never had a chance on the road against No. 15 Penn State, ending the season with a whimper and leaving Pigrome and Jones to contemplate the near-miss all offseason.

“I remember everything about that play,” Jones said. “I try not to watch it that much, unless I need a little push to get me an edge on a workout, on a practice day.”

Pigrome said he’s talked to his teammates about the need to finish the job next time, completing an upset rather than flirting with one. And he and Jones often discuss what happened on that play, though they don’t reach many conclusions — Could Pigrome have tucked it and run? Should Jones have continued his route? Did Pigrome need more touch on the pass?

“I don’t know,” Pigrome said. “That’s the biggest thing we’ve been trying to figure out.”

Pigrome remembers his eyes going wide when he looked back and saw Jones open. His pass was off target, though, so the upset bid collapsed, and the season was effectively over.

The near-miss has Jones and Pigrome looking forward to traveling to Columbus, Ohio, on Nov. 9 with a chance to avenge the play that’s stuck with them for the five months since Jones fell to the ground in dismay, two points short of a season-defining win.

“Rewatching that play over and over just kind of bummed me out a little, cause I feel like, we were there,” Pigrome said. “That play’s still going to be in the back of my head until we play them again.”