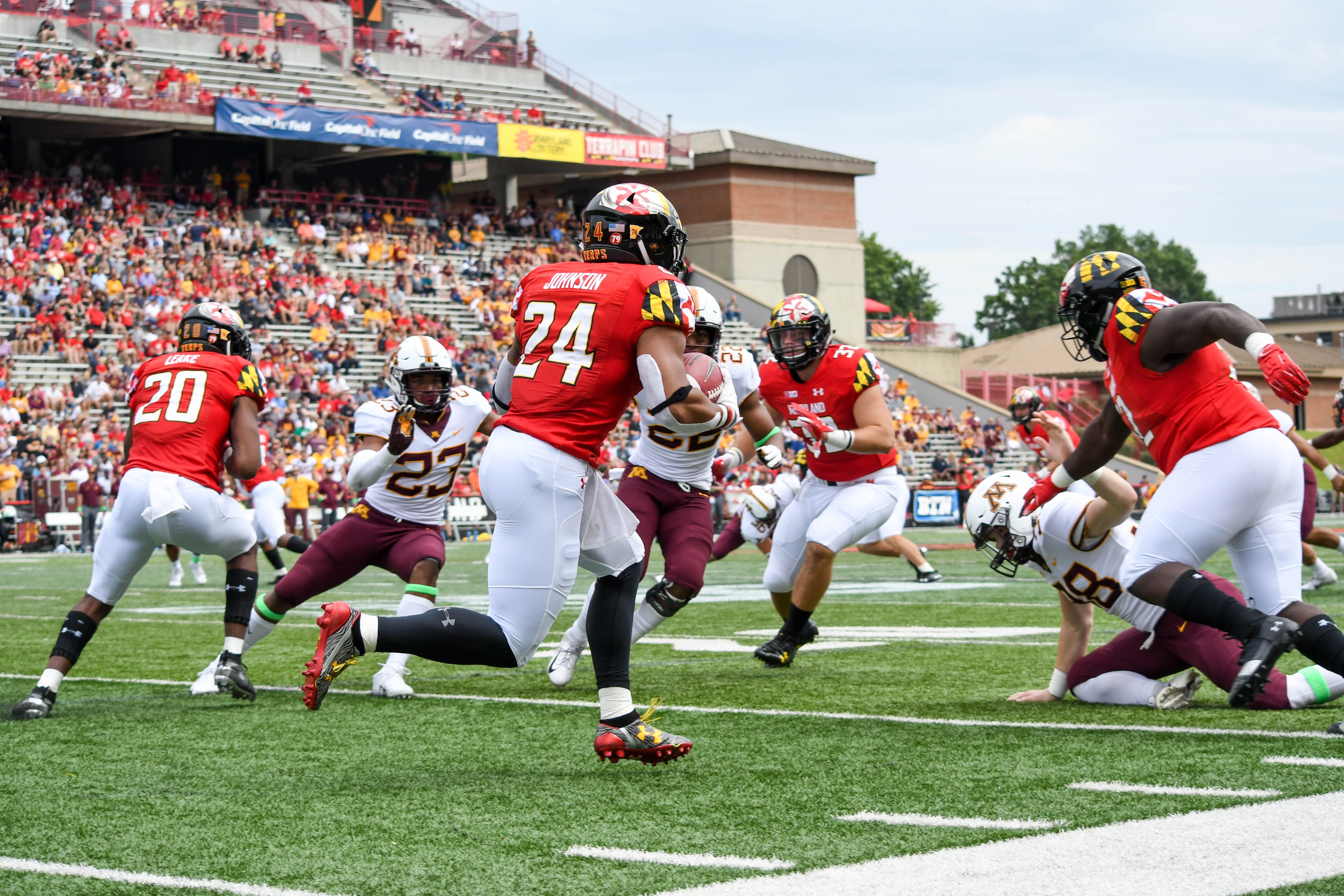 Running back Ty Johnson making a run through the field during Maryland football’s 42-13 win over Minnesota at Maryland Stadium on Sept. 22, 2018. (Alex Chen/The Diamondback)

Jordan McNair used to sit behind Derwin Gray in Maryland football’s offensive line room. Gray, a senior with NFL aspirations, served as a role model for the rising sophomore.

When McNair collapsed at a team workout in May from heatstroke and died two weeks later, there was an intense grieving period for the Terps — and especially the offensive linemen, who will meet in a room bearing McNair’s name inside Cole Field House.

“It was kind of tough, man,” Gray said, “looking back and him not being there anymore.”

As Gray and 14 of his teammates prepare for next month’s NFL Draft, they’re facing questions from teams about McNair’s death, the ensuing coaching uncertainty and how they handled it all en route to a 5-7 finish. They hope NFL teams share in their belief — that overcoming the media circus, internal turmoil and external pressure shows an aptitude for handling adversity.

“Every single time they talk to me, that’s all they ask about,” running back Ty Johnson said. “At the end of the day, we all came together. We still played every day. And even though that might not have been a winning outcome, we still tried and gave it our best. Just getting through that, you learn a lot and grow as a person.”

Probing questions — some of them inappropriately personal — are a notorious part of NFL teams’ scouting. In 2010, the then-GM of the Miami Dolphins asked wide receiver Dez Bryant if his mother was a prostitute, later apologizing. In 2016, cornerback Eli Apple said the Atlanta Falcons asked him if he likes men.

Former Maryland wide receiver DJ Moore was asked if he would rather be a dog or a cat. One interviewer asked him to count and recite the alphabet at the same time, something the eventual first-round pick confessed he “didn’t do too well on.”

While safety Darnell Savage said he hasn’t “gotten any odd ones” this year, he and his teammates have been asked repeatedly about how Maryland came together after losing a teammate and having coach DJ Durkin placed on administrative leave three weeks before the season opener against Texas.

Savage said he points to how the team played with McNair in mind.

Watson wasn’t new to a program in turbulence. He played for five different head coaches and four position coaches between two schools. His first coach at Illinois, Tim Beckman, was fired after allegedly encouraging injured players to keep playing, rather than seek medical treatment.

He thinks NFL teams look at how players handled adversity in the past, because there are no guarantees in professional football.

“It was just something to learn and grow from,” Watson said. “If you’re able to [persevere] in an environment like that, imagine what you’re able to do in a stable and consistent place where everything is going well and going forward.”

Nine months after McNair’s death, memories of their teammate endure with the Terps. And for those preparing for the NFL Draft in April, the questions regarding a tumultuous season remain as prevalent as McNair’s memory.

“They hammered that always home: ‘How did that feel? How do you feel?’” Gray said. “Still think about Jordan in everything I do.”