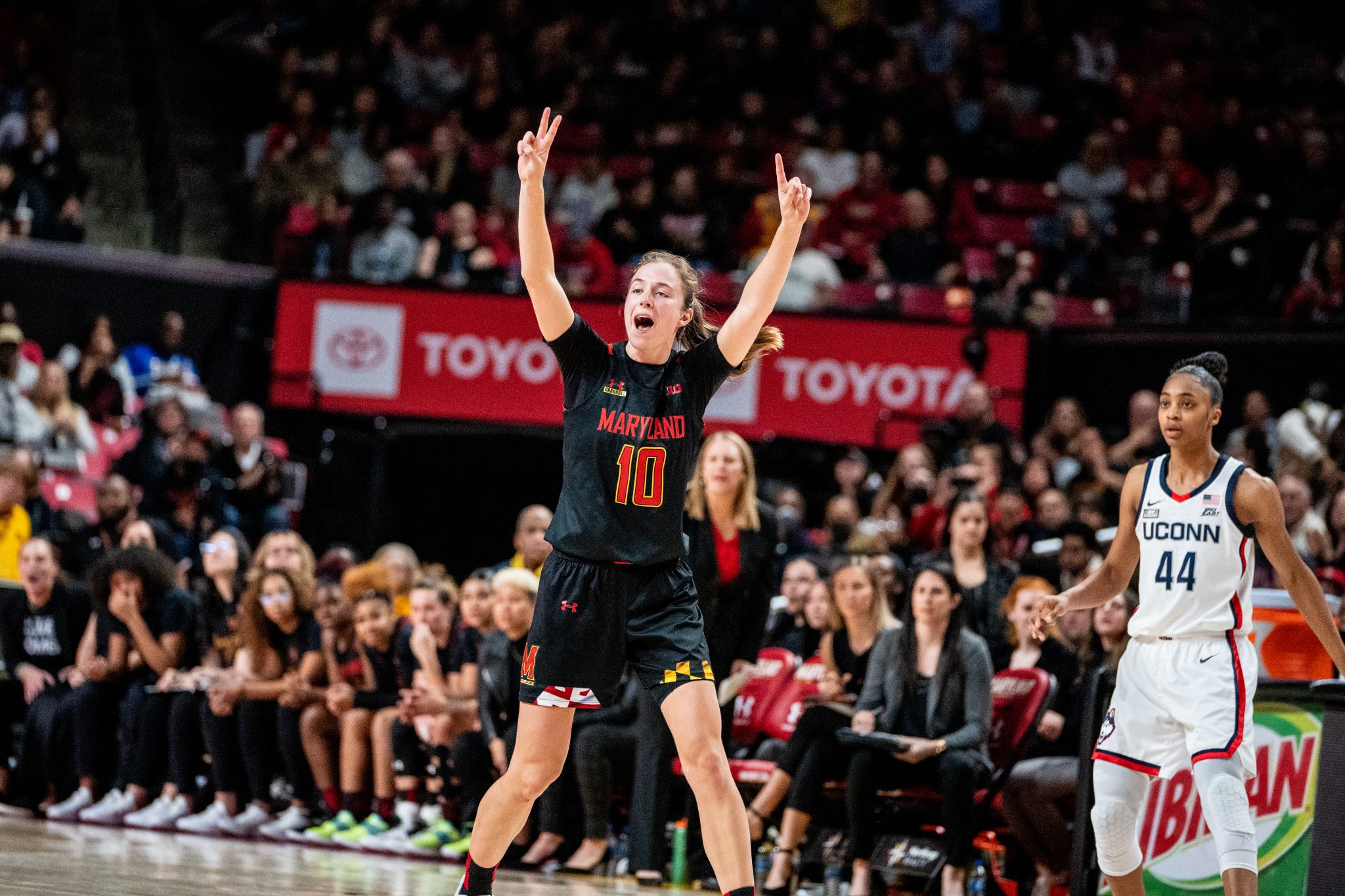 Abby Meyers went through her typical shootaround progressions before No. 13 Maryland’s early December game against Purdue. But instead of standing at the free-throw or three-point line, she went to halfcourt.

With her back to the hoop, Meyers heaved a one-handed hook shot — her other hand grasping her cell phone for video evidence — that swished through the net. It’s one of many shots she’s hit for Maryland women’s basketball, but her impact goes further.

In her first season with the Terps, the senior transfer has brought a fun and energetic leadership style to a team that was searching for an identity after several high-profile departures and a plethora of additions. Meyers, one of the new pieces who transferred from Princeton, tries to be authentic and approachable with her teammates.

“For me, one of the biggest things is to develop personal relationships, emotional connections, intellectual connections with my teammates,” Meyers said. “That should be the priority, I think, for any new teammate coming into a new program is to really just earn the trust and the respect of your teammates by showing them that you’re authentic.”

Even in high-pressure moments, Meyers’ attitude calms the team. Freshman Bri McDaniel tangled with No. 1 South Carolina’s Kierra Fletcher in a game earlier this season, an encounter that led the two to banter. Meyers played peacemaker, busted out a wide grin and then pulled her teammates into a huddle — her smile never fading.

“That joy of making plays and having fun out on the court, it’s her last year, but then also knowing that you have to lock back in for the seriousness of the next possession and the next play,” coach Brenda Frese said. “It also kind of lightens the team in pressure situations that makes them comfortable and confident.”

Meyers acts as her own hype artist by celebrating when she hits clutch threes, tapping her legs as a you-can-do-this salute or verbally pumping herself up. Her joy is evident to her fellow Terps.

“As a teammate, she’s like the president of the United States,” freshman Gia Cooke said. “So every word she says is like high-IQ-level with some crazy, out-of-the-dictionary words … But she does play well — lot of excitement and happiness, joy for sure because she’s doing what she loves.”

Meyers, who was voted captain in her first year with Maryland, said she wasn’t always the best teammate. In middle school and early in high school, she remembers being unnecessarily hard on her teammates and blaming them for errors. She withheld high fives and would not give consistent eye contact if she was mad about how a teammate was playing.

But Meyers has evolved as a teammate and a leader in her junior and senior years at Walt Whitman High School in Bethesda and at Princeton.

She realized she could still contribute to the game while sitting on the bench during her college recruitment process, as the desire to show prospective coaches and her team she was a good teammate manifested as clapping, cheering and high-fiving when off of the court.

Another development in Meyers’ maturation as a leader was the gap year she took between her freshman and sophomore years. She spent a part of it in Peru and Bolivia before returning to the U.S. for an investment banking internship in Chicago.

Meyers, a self-proclaimed jokester, tries to enjoy herself on the court and wants to make people laugh — even at her own expense.

Her personality illustrates to her teammates that it’s possible to be silly and have fun while also working hard, Frese said. Even as she brings levity to practices and games, Meyers puts aside her goofiness and is a serious leader when she needs to be.

“When she knows we’re not being our best selves, she’ll definitely say something. For being a captain, that’s what we expect,” Cooke said.

After earning Ivy League player-of-the-year honors last season, Meyers has logged at least 20 points four times for the Terps and has been the leading scorer in six of the team’s 16 games.

But she hit a difficult two-match stretch at the start of December, combining for eight points, 4-for-17 from the field and missing all five of her 3-point attempts against Notre Dame and Nebraska before briefly moving to the bench.

In her only substitute appearance of the season against Purdue, Meyers bounced back for 19 points and has exceeded 11 points in every game since. Those games against Notre Dame and Nebraska have been her only ones scoring in single-digits.

This season, she’s changed up her routine by incorporating trick shots into practice and playing games of H-O-R-S-E with teammates. Those activities symbolize her unfettered joy for the sport and life, qualities that have helped her become a leader for the Terps.

And even before that mini-stint on the bench, Meyers was already showing how much fun she has with the game. After draining the behind-the-back halfcourt shot, she trotted up to several media members who filmed her from the sideline.

She exclaimed, “There we go! Gameday!”