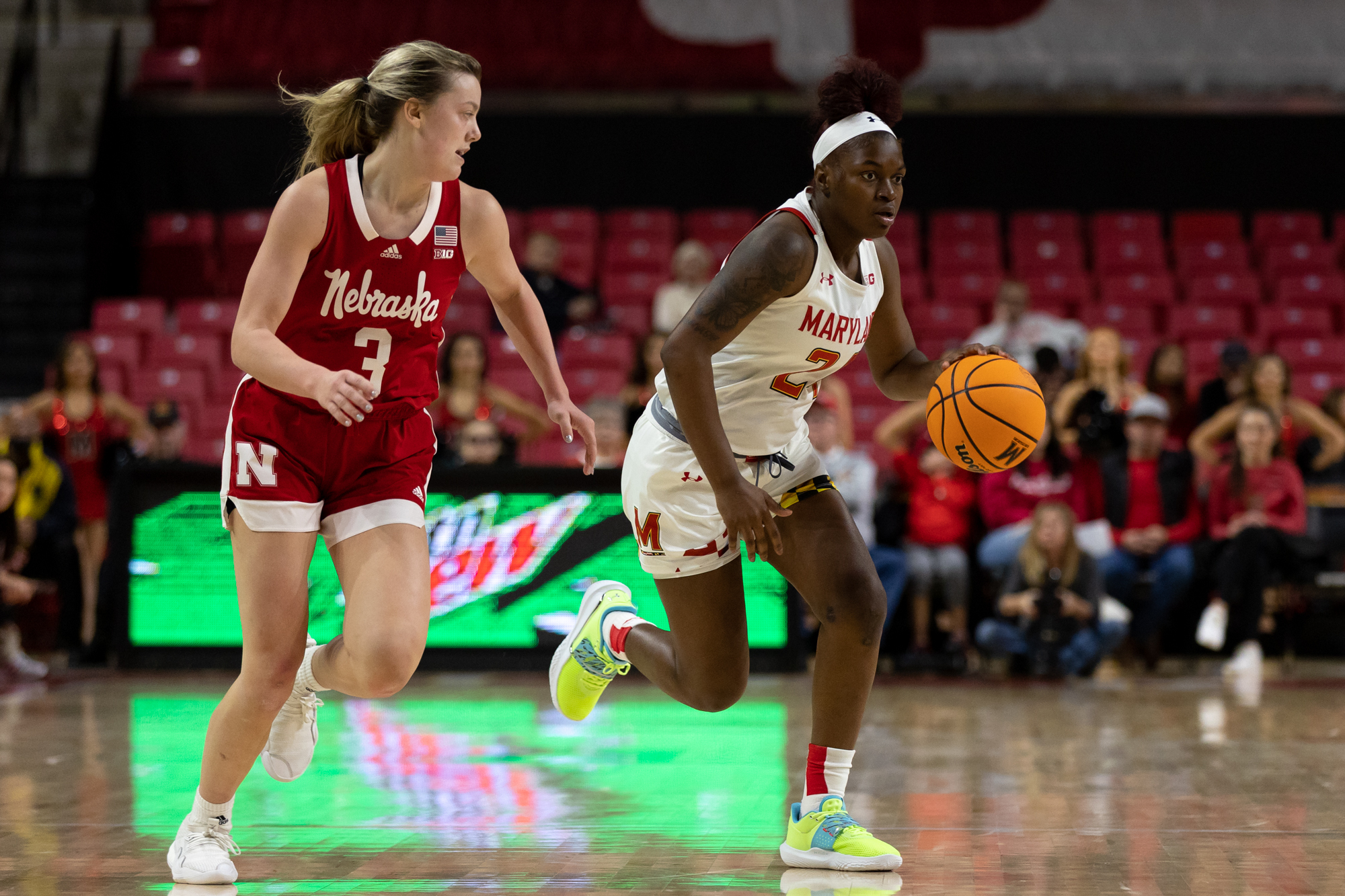 A tie game at halftime quickly turned into a comfortable 94-85 win for No. 13 Maryland Saturday afternoon at Xfinity Center. Coach Brenda Frese’s squad won its sixth in a row and fourth consecutive in conference play over Michigan State.

The Terps hit their stride in the third after entering the half tied at 40, using a 23-3 run to take a 19-point lead. It is the fourth straight match that Maryland (13-3, 4-1 Big Ten) has scored around 30 points in the third.

“We get to regroup [at halftime], and when we come out, we come out stronger than how we started the first half,” Diamond Miller said. “Especially n this game, it was technically 0-0 [to start the second], so we really had to make a run to give ourself some lead.”

“I love the confidence that she was playing with,” Frese said of Briggs. “I know her defense is always going to be there.”

Michigan State (10-6, 2-3) coach Suzy Merchant also praised Briggs’ ability to integrate with the Terps despite being a transfer.

“I just try to play hard,” Briggs said. “I try to play defense and get my teammates shots, and I know they’re gonna find me and get me shots … [I try to] crash the boards as hard as I can and try to keep the possession going.”

With conference play in full swing, Frese has talked about getting the team’s freshmen meaningful minutes. On Saturday, Bri McDaniel got some time, suggesting that the coaching staff might be starting to trust the Chicago native, who had seven points and hit a critical three.

With six seconds left on the shot clock in the third, McDaniel got the ball and sprinted down the court. After weaving between a pair of Michigan State defenders, she launched a deep three, which clattered around the rim and fell through the net as time expired. Maryland players on the court and the bench jumped up and circled McDaniel, who wore a cheek-to-cheek smile.

“I loved Bri McDaniel today,” Frese said. “I thought she’s really trending in the right direction where we need her to based off of practices and no coincidence the success she had today.”

Michigan State might as well have pressed pause, rewind and play for its first two baskets. The Spartans pounded the ball inside to 6-foot-3 forward Isaline Alexander, who bullied her way to the rim. The visitors then forced a turnover and found Alexander again for an identical play to take a four-point lead.

[No. 13 Maryland women’s basketball rolls to fifth straight victory in 78-67 win over Rutgers]

Despite that early miscue, Maryland’s passing acumen was on full display in the first quarter. Midway through the period, Faith Masonius, 12 points, found Elisa Pinzan in transition. The point guard delivered the ball to Meyers, who hit Briggs with a one-touch pass for an easy layup.

After scoring five points in the first quarter, Meyers started to heat up from three in the second. The Princeton transfer made both her deep looks, including an off-balance three with the shot clock expiring from the right side. She finished with 11 points.

Michigan State’s press gave Maryland fits early, but the Terps quickly self-corrected, giving the ball away just three times in the second half after losing it five times in the first quarter. The home side also scored 20 fast break points to the Spartans’ four.

The visitors cut the lead to seven in the final quarter with a flurry of threes, but the Terps’ third-quarter success was enough to weather the comeback try. Matilda Ekh led the visitors with 20 points while Moira Joiner added 19 points and eight rebounds.

While Maryland improved to 17-2 all-time against the Spartans, they let the away side take 44 threes and make 19 of them.

“Areas that we’re gonna have to be able to learn from,” Frese said of Michigan State’s long-range success. “Luckily, we were able to get a win tonight, but it’s not going to get it done against teams moving forward.”