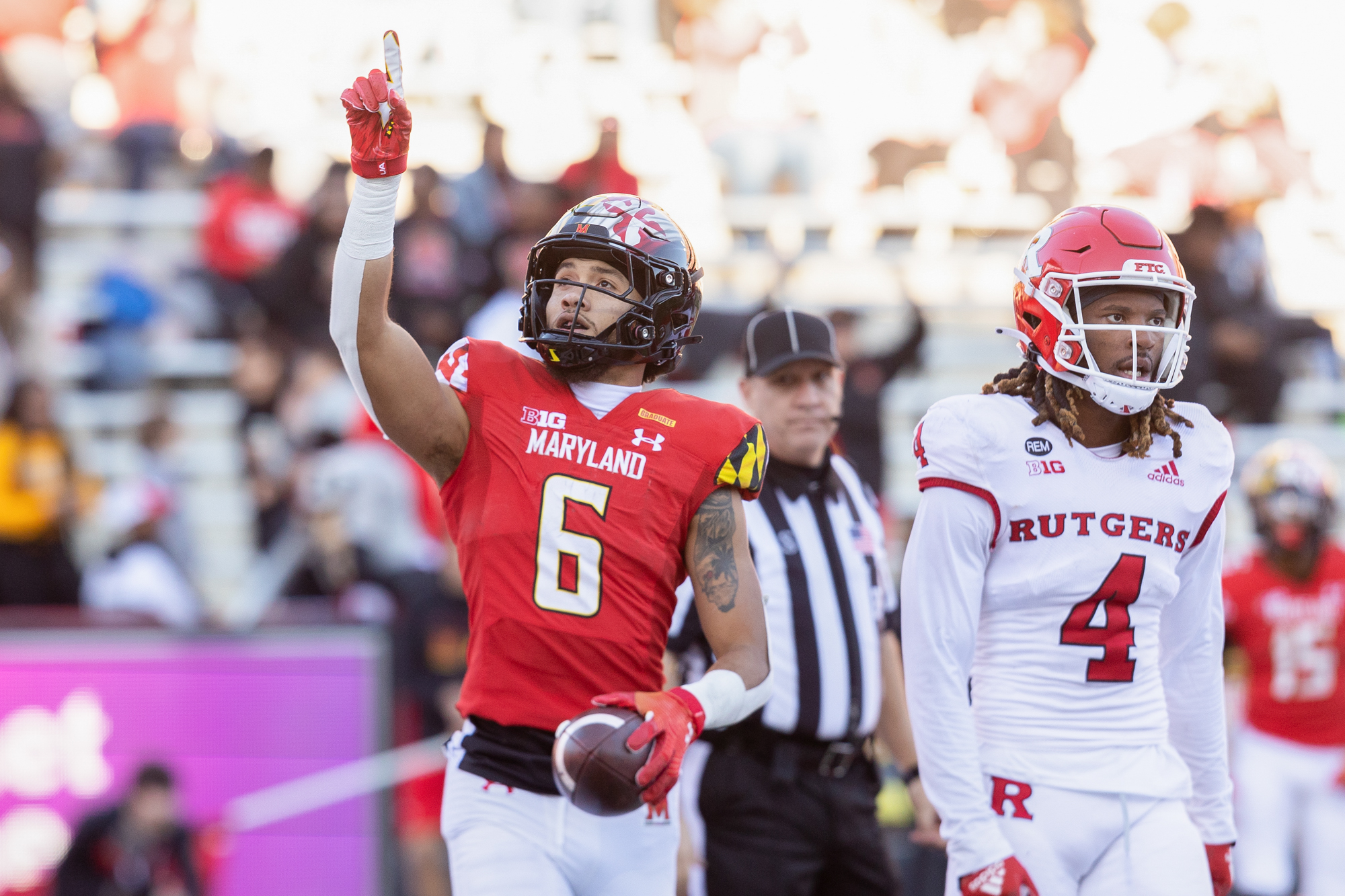 Jeshaun Jones sat in a black leather chair inside of Jones-Hill House days before Maryland football took on Rutgers in its regular season finale. Tears streamed down his face as memories of his five-year Maryland career flashed before his eyes.

In an emotional tribute video shown to the Terps’ seniors before their 37-0 win over the Scarlet Knights, Jones was reminded of the legacy he left during his five-year tenure in College Park.

The wide receiver said he “never dreamed” of being in school for five years. Nor did he envision himself undergoing multiple ACL surgeries before battling back on the field to become a key cog in Maryland’s offense.

“My emotions are gonna be crazy on Saturday, just knowing that it could be my last time walking on that field,” Jones said in the video. “I just want to go out there and leave my mark and go out with a bang.”

And Jones delivered in what might have been his swan song at College Park. The 6-foot-2 senior caught nine receptions for 152 receiving yards, both career highs, as the Terps rolled over the Scarlet Knights en route to their seventh win of the season.

“[Jones] shows the toughness that you want, the resiliency, all pillars of our program, and he’s a guy that leaves it all on the field,” coach Mike Locksley said.

The receiver felt another wave of emotion when he took the SECU Stadium field for possibly the last time during pregame warmups, he said. He stood on the field and took in the Senior Day atmosphere when offensive coordinator Dan Enos approached him ahead of opening kickoff.

Enos told Jones to “lock into the game” once the Terps’ senior ceremony ended and deal with his feelings after the game.

“It was just a lot running through my head, but I’m glad I centered in when it was time,” Jones said.

Maryland quarterback Taulia Tagovailoa wasted little time finding Jones once the game began. The duo linked up for a 16-yard throw-and-catch minutes into the first quarter, one of Jones’ five first half catches.

His third catch of the afternoon came in the second quarter, when Tagovailoa found him streaking down the middle of the field for 43 yards on third and 10. Maryland scored later in that drive, doubling its lead before running the score up on Rutgers in the second half.

The game quickly dissolved into a lopsided affair as the second half commenced. That didn’t stop Jones from finding his senior moment.

With the Terps up 30 and once again within striking distance, Jones flashed open again — locating a Tagovailoa pass before pulling a defender into the endzone with him for what would be his final regular season score of the year.

The touchdown put Jones on the receiving end of history. The completion marked Tagovailoa’s 50th touchdown pass in a Maryland uniform, breaking a record Scott Milanovich held for the most career passing touchdowns in program history.

“I just know how much he’s worked and how much I’ve worked,” Jones said of his quarterback. “Just to see that happen and I get to be the person to catch the ball for that guy, that was just a big moment.”

As the team returned to the sideline, Tagovailoa and Jones each raised each other’s hands to meet the embrace of the crowd as their faces appeared on the jumbotron.

“[Jones] is a senior, he’s been through a lot,” Tagovailoa said. “It was a lot on his plate, and for him to perform the way he did, I’m very proud of him.”

Jones’ career day marked a full-circle moment for the fifth year senior. It was more than four years ago when he first burst onto the scene for the Terps in his first college game in a win over Texas, scoring a passing, rushing and receiving touchdown as a freshman.

It’s “felt like ages” since that game, Jones said. The performance increased outside expectations for the receiver, the weight of which grew over his Maryland tenure and eventually turned into pressure he put on himself.

But as he stood with Tagovailoa on the sideline — the two raising their arms and Jones reveling in the cheers of the Maryland crowd for possibly the final time after a 152-yard day — it looked like that burden had been lifted.