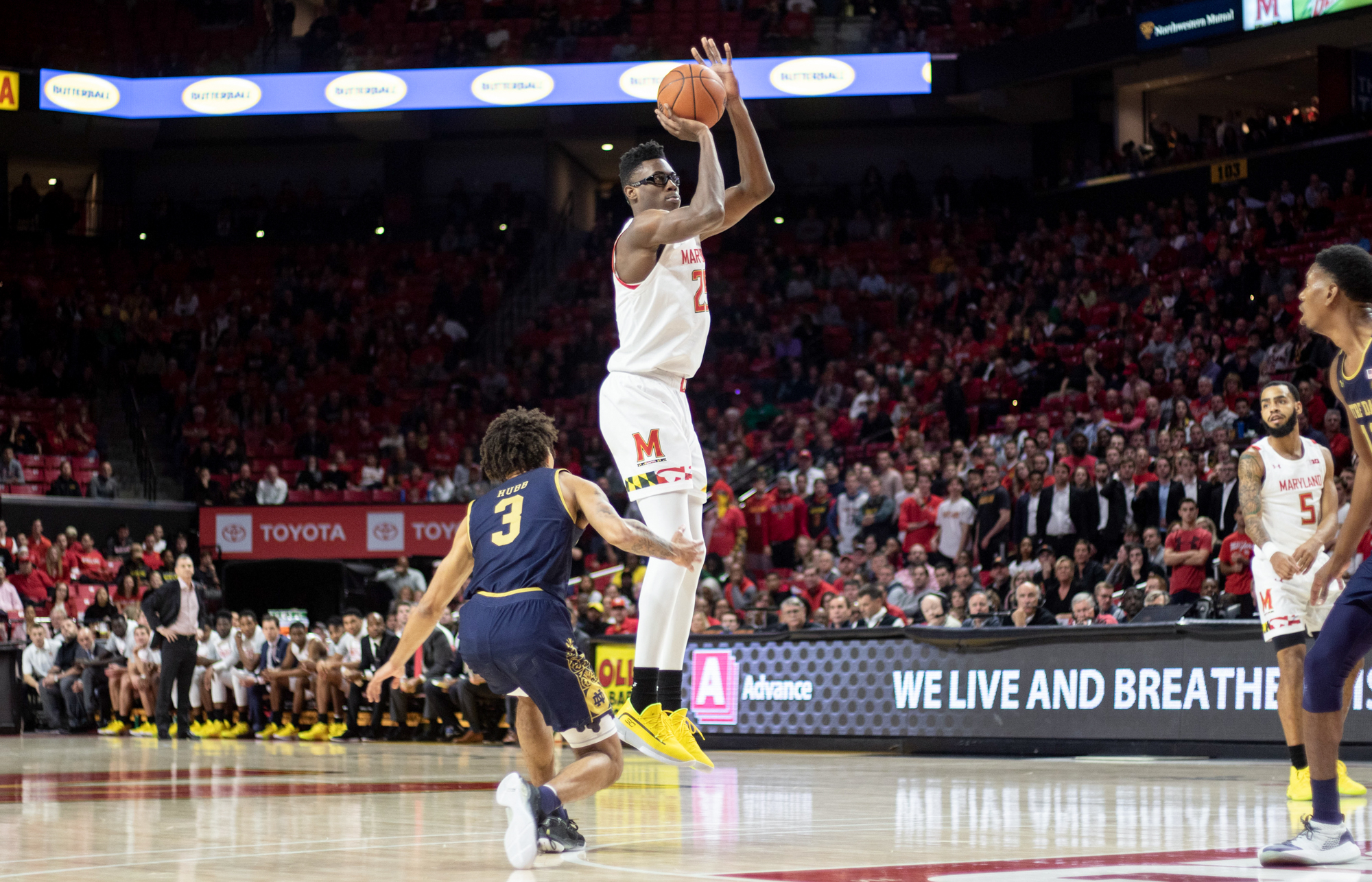 The ACC/Big Ten Challenge will conclude this year after 23 years of men’s competition and 15 years of women’s.

The Terps are the only school to represent both the ACC and the Big Ten after swapping conferences in 2014. Maryland men’s basketball finished the challenge with a 12-12 record after defeating Louisville 79-54 Tuesday while No. 20 Maryland women’s basketball holds a 12-2 record before taking on No. 7 Notre Dame Thursday in its final matchup of the event.

To commemorate the end of the challenge, The Diamondback’s basketball writers ranked the 10 most memorable games the Terps played in the challenge.

A gold-clad Xfinity Center crowd hurled boos at the court as the final buzzer of Maryland’s 62-58 loss to Virginia Tech sounded on Dec. 1, 2021.

Maryland started the 2021-22 season ranked in the AP Top 25 poll but had already suffered a surprising loss to George Mason at home and a defeat against Louisville.

Turgeon compiled a 226-11 record with the Terps and won a share of the 2019-20 Big Ten title. But that team, arguably the best assembled under Turgeon, saw its postseason hopes fizzle due to COVID-19 and the cancellation of that year’s NCAA tournament. The Terps’ 2021-22 season similarly fizzled under interim coach Danny Manning and ended with their first losing record since 1993.

While the Virginia Tech loss may not be solely responsible for Turgeon’s departure, the defeat is one of the most consequential losses in the team’s history as Maryland moved on and hired its 10th head coach of the program, Kevin Willard.

2. No. 5 Maryland women’s basketball beats No. 7 Louisville with abundant talent on floor in 2016

This might as well have been a WNBA preview game; of the 10 players who started, six of whom being Shatori Walker-Kimbrough, Brionna Jones, Destiny Slocum and Kaila Charles for Maryland as well as AD Durr and Myisha Hines-Allen for Louisville went on to play in the WNBA.

Walker-Kimbrough and Jones combined for 42 points on 15-for-23 shooting from the field, while Durr and Hines-Allen combined for 36 points and 14 rebounds as the Terps downed the Cardinals in Kentucky, 78-72.

The contest delivered on the promise of a heavyweight battle between two of the nation’s top teams on Dec. 1, 2016. Maryland’s largest lead was 10 points, while Louisville had a nine-point advantage. Not only was this one of the Terps’ statement wins of the ACC/Big Ten Challenge, but it was also one of the side’s marquee victories of the 2016-17 season.

Maryland faced a 44-37 deficit with 13 minutes left, but the Boilermakers went on to miss 18 of their next 21 shots, opening the door for Toliver and Marissa Coleman to engineer a Maryland comeback.

Neither missed a shot in the last five minutes of the game and Toliver, who was inducted into Maryland Athletics Hall of Fame earlier this year, finished the game with 24 points.

4. No. 4 Maryland men’s basketball’s defeats No. 2 Illinois ahead of NCAA title run

Juan Dixon and Chris Wilcox combined for 44 points as Maryland ran out to a first half lead and took down Illinois, 76-63, in a matchup between two top five teams Nov. 27, 2001.

Steve Blake added nine assists as the Terps notched their first win over a top five team at Cole Field House since 1998 to rebound from a season-opening defeat to Arizona.

“This is good for us to get this big game early in the year. It let people know that we’re for real,” Dixon said after the game, according to the Associated Press. “I guess a lot of people counted us out after we lost to Arizona, but we did well today.”

The Terps certainly were “for real,” dropping just three more games all year on their way to the 2002 national championship, which remains their only NCAA title in program history.

5. Melo Trimble shines in Chapel Hill despite loss to No. 9 North Carolina

Trimble pulled up from behind the arc and nailed a three-pointer while being fouled as Maryland’s bench roared. His ensuing free throw gave the No. 2 Terps their first lead of the game, but the sophomore guard’s dazzling display wasn’t enough in the 89-81 loss.

Maryland started the year 6-0 but lost for the first time in the 2015-16 season on Dec. 1, 2015, to the Tar Heels as Trimble dropped 23 points on 4-for-5 shooting from behind the arc. He also notched his career high in assists with 12. His double-double in points and assists was the first by a Maryland player since 2008.

Trimble scored or assisted on 67.4 percent of Maryland’s 46 second half points — but the Terps couldn’t overcome a six-point first-half deficit.

The top 10 matchup was one of Maryland’s only marquee games in the ACC/Big Ten Challenge after joining the Big Ten in 2014. The Terps still struggled against weaker opponents and finished with a 2-7 record in the event after they swapped conferences.

Down by one point with less than a minute remaining, Kaila Charles entered the game for Maryland. Charles made a layup to give her team the lead, then extended it with a free throw to put the score at 60-58.

The Cavaliers attempted to fight back with their own free throw, but the Terps shut them down to finish with a 60-59 win on Nov. 29, 2017. After leading 34-25 at halftime, Maryland’s offense stagnated as it allowed an 11-0 run from Virginia that started at the end of the third quarter and carried over to the fourth.

With three of the four lead changes occurring in the final 10 minutes, the matchup between the Terps and Cavaliers stayed intense until the final buzzer.

Before the Terps made their switch to the Big Ten, they took on a current conference opponent in the unranked Boilermakers. Maryland erased an 11-point deficit side by outscoring their opponent 13-3 in the final five minutes of the match to win, 56-55, on Dec. 2, 2010.

This should have been a straightforward win for Brenda Frese’s team on paper, but the Boilermakers nearly escaped with an upset victory.

They might have pulled it off if not for 20 points from then-junior center Lynetta Kizer and 12 points and nine rebounds from then-freshman forward Alyssa Thomas.

Maryland lead at halftime and almost prevailed in regulation, but Steve Blake’s midcourt heave that sunk through the nylon was waved off before Indiana took control in overtime, outscoring the Terps 12-6 in the extra period.

Blake finished with 22 points but couldn’t add what would’ve been a crucial additional three as the Hoosiers exacted a small portion of revenge on coach Gary Williams’ squad, the defending national champions.

9. No. 15 Maryland women’s basketball loses in challenge for first time to No. 2 Notre Dame

Maryland attempted to launch a comeback after finishing the first half trailing by 20 points and scored 45 points in the second half. But they were no match for Notre Dame, who matched that scoring output to win by 20.

Future WNBA champion Jewell Loyd led the Fighting Irish with 27 points. Notre Dame advanced to the NCAA tournament title game in 2015 before falling to UConn. Maryland will get a chance for revenge Thursday, the first meeting between the teams since the 2014 matchup.

10. No. 3 Maryland men’s basketball powers past Notre Dame for best start in 20 years

The Terps’ stifling defense held the Fighting Irish to 29 percent shooting from the field, while a balanced scoring attack methodically broke down Notre Dame. Turgeon’s squad improved to 9-0 with the victory, which marked Maryland’s best start to a season since winning 10 in a row in 1998.

The Terps matched that 10-win start with a win over Illinois and finished the season 24-7 with a share of the Big Ten regular season trophy, but never got to showcase their ability in postseason play as COVID-19 caused the cancellation of the Big Ten and NCAA tournaments.