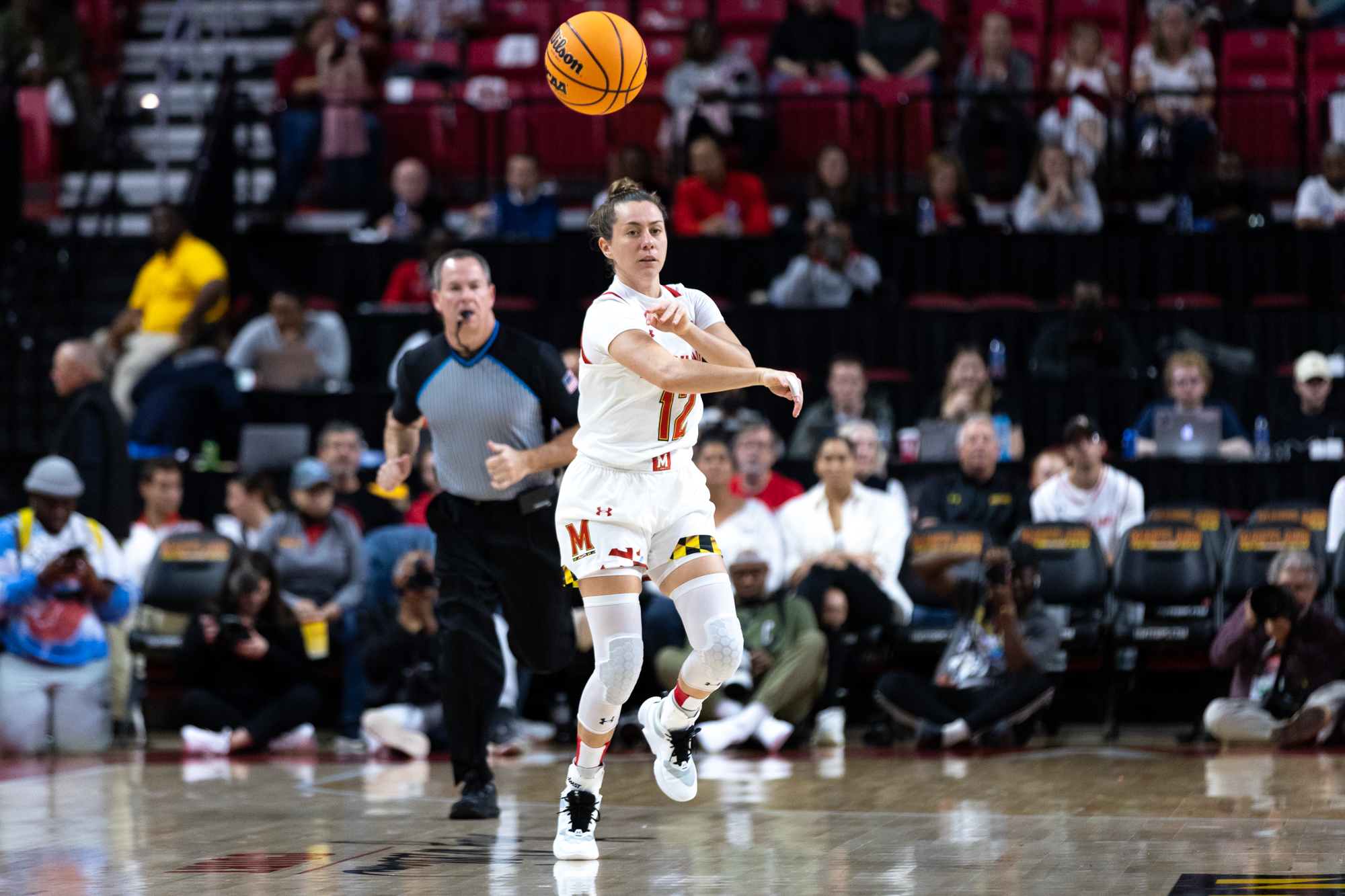 Abby Meyers had the ball on offense but was double-teamed by Pitt as she searched for an opening to shoot or pass.

With her defender distracted by Meyers, Lavender Briggs cut toward the basket and got open for a pass. Meyers lobbed the ball her way, and Briggs made the layup to give Maryland women’s basketball a 10-point lead for the first time in the third quarter.

“Everybody’s trusting each other and playing with one another and knowing that your teammates got your back and they’re just as good,” Briggs said.

Two days before tallying a season high 21 assists against Pitt, Maryland tied its season low 12 assists in a 76-67 loss to DePaul in the opening game of the inaugural Fort Myers Tip-Off. But the Terps rallied and finished the weekend 2-1 after improving their ball handling against Towson and Pitt.

Coach Brenda Frese’s squad finished their loss against DePaul with a 0.857 assist-to-turnover ratio and six bad pass turnovers. Maryland had 12 assists, the same amount it had in its worst performance of the year in a l0ss against South Carolina.

“They’re being super intentional, very, very unselfish and I think they saw when we move the basketball like this, everyone’s going to be able to score and assist,” Frese said.

Shyanne Sellers led the team with five assists against Towson and Elisa Pinzan tallied five the next day against Pitt.

Those assists have helped Maryland gain momentum. From across the arc, Pinzan shot the ball to Meyers, who made a three-point shot in the first quarter against Pitt to regain the lead. Pinzan leads the team with 29 assists so far this year, 10 more than runner-ups Meyers and Sellers.

Frese also aimed to improve the Terps’ turnovers after her team recorded 21 giveaways against Davidson. She acknowledged that with eight new players coming together, turnovers can happen due to a lack of chemistry on offense.

“As a coach, you’re impatient … because you know that the schedule is unrelenting, but just the more reps we get the better,” she said.

The Terps curbed their turnovers in Fort Myers and found their teammates. They averaged 13 across the three matchups and decreased bad pass turnovers, recording five against Towson and four against Pitt.

When players are moving the ball well, not only is it contagious, it makes it harder for opponents to defend against Maryland, Frese said.

“You can tell you know that’s growing our chemistry, the unselfishness with one another,” she said. “I think it’s a lot more fun when the ball moves.”