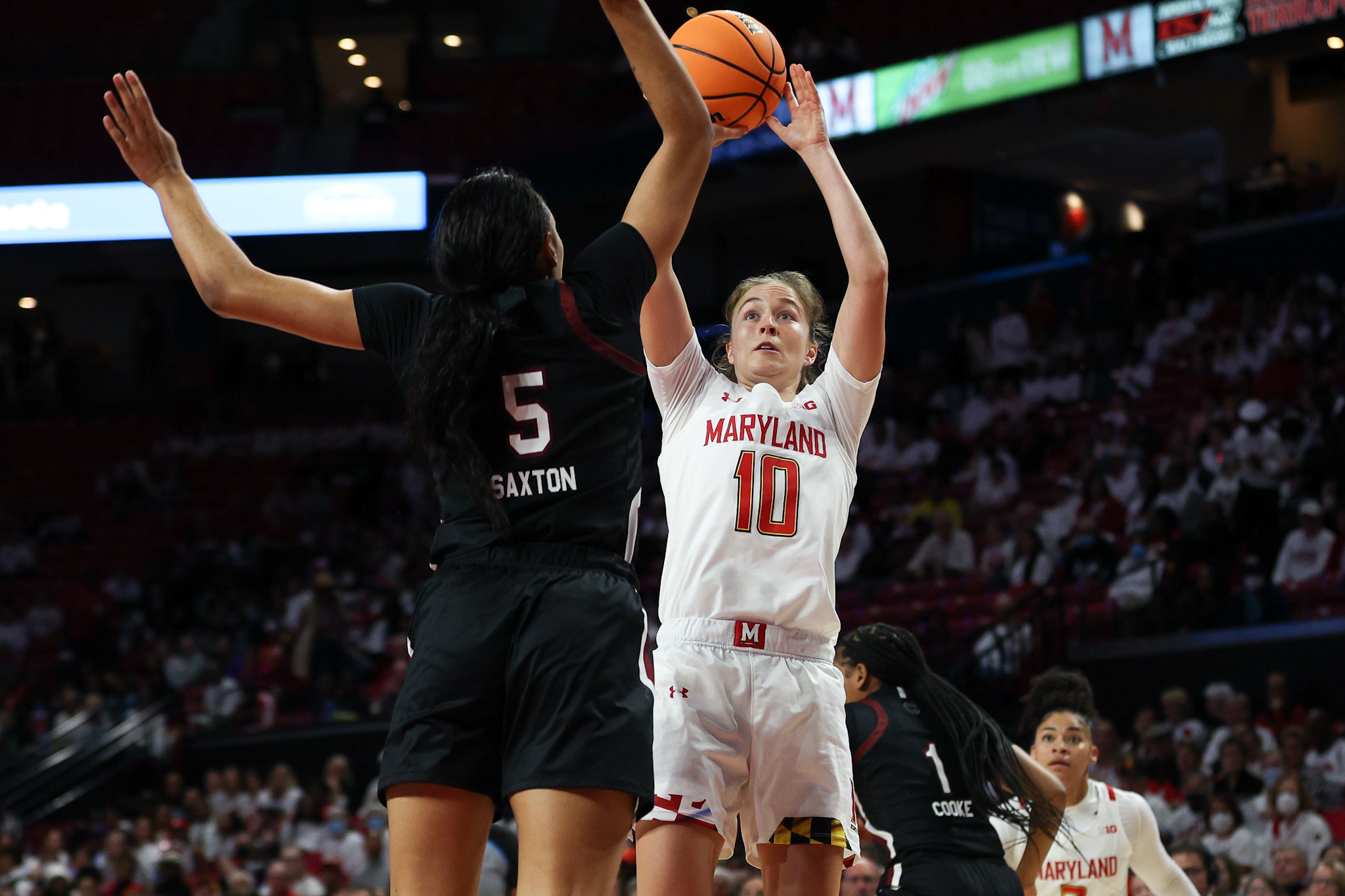 Shyanne Sellers dribbled the ball toward the basket with the shot clock turned off and time left in the quarter dwindling. The guard passed the ball to Abby Meyers, who was quickly double-teamed by Pitt’s defense.

Meyers tossed the ball back to Sellers with two seconds left in the third quarter, setting her sophomore up to shoot the ball from behind the three-point arc, a volley that flew through the basket as the buzzer sounded to cap a 36-point third quarter for the Terps.

The second-half offensive surge from Maryland women’s basketball helped it topple Pitt 87-63 in its final game of the Fort Myers Tip-Off.

“Third quarter we really took it upon our team to make that run and really set ourselves up for the fourth quarter to be comfortable there,” Meyers said.

After making just two three-point baskets in the first half, the Terps made six in the third quarter with two from Meyers and three from Brinae Alexander, who finished with 17 points.

Another transfer, Lavender Briggs, finished the quarter with five points and four rebounds. Alexander, Meyers and Briggs combined for 50 points, over half of the Terps’ total scoring.

Maryland pulled ahead early with a 9-0 run in the first quarter. The squad prevented Pitt from scoring for more than three minutes. But after a media timeout, the Panthers put themselves back in the game with two quick baskets to decrease the Terps’ lead to just two points.

But the first of five three-pointers from Alexander aided the Terps to pull away with a 17-11 lead to end the first quarter.

“We knew the game was going to be about who’s tougher mentally, physically, three games in three days, so I just knew I had to lock in and focus on what we do best,” Alexander said.

Pitt closed in on Maryland again in the second quarter, using a three-pointer to cut the Terps’ lead to 21-18. But coach Brenda Frese’s squad stayed ahead due to a near-four minute stretch where it kept the Panthers scoreless.

But Maryland couldn’t pull away as its offense sputtered. It had four turnovers in the second quarter compared to just two in the first and went 0-7 from behind the three-point line in the frame.

The Terps struggled in the first half offensively, shooting 35.1 percent from the field. Diamond Miller, usually a strong offensive contributor, shot just 3-of-9 and had a turnover.

The Terps’ defense found success, limiting their opponents to just 11 field goals in the first two quarters. No Pitt player scored more than six points and they were forced into nine turnovers in the first half.

The defense continued its strong play throughout the game, limiting Pitt to 36.4 percent shooting as just one Panther scored in double digits.

“I thought it started on the defensive end, just ready to defend, and came out really aggressive,” Frese said. “I thought our offense was really really easy, we can make it easy for each other.”

That performance combined with the third-quarter offensive explosion propelled the Terps to victory.