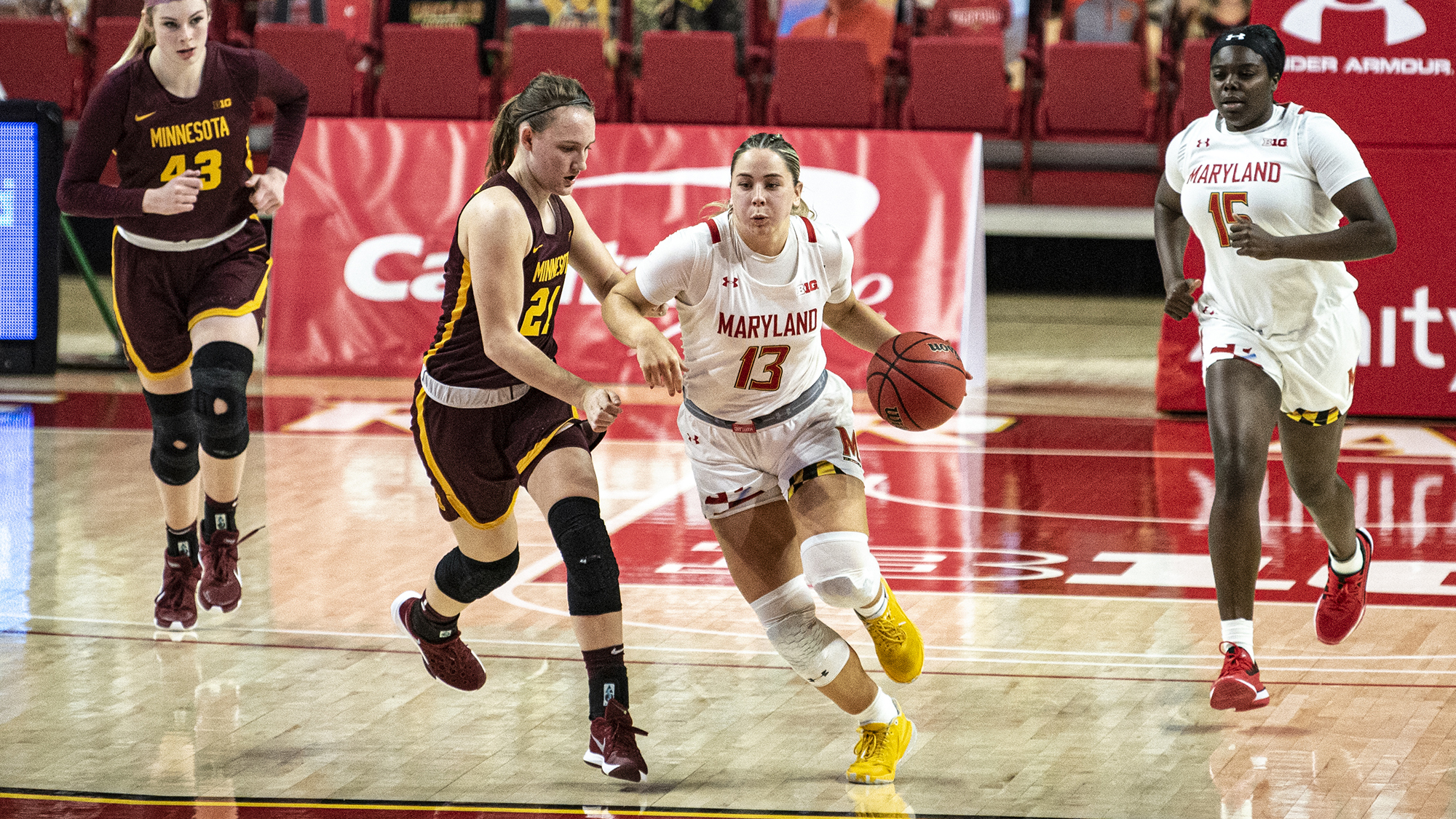 Senior forward Faith Masonius has started eight of the 77 games she’s played for Maryland — seven have been this season. Masonius has spent her time in College Park as a defensive specialist with the ability to rebound, but in her senior season has become one of the team’s more reliable scoring threats.

Masonius logged a season-high 14 points Saturday as No. 14 Maryland women’s basketball (5-2) defeated Towson, 81-70, at the Fort Myers Tip-Off. The New Jersey native was two points shy of matching her career-best scoring output, and through her last five outings, Masonius, who has never averaged more than 6.8 points in a season, has given the Terps 11.6 per game.

“Faith is a glue player,” senior guard Diamond Miller said. “She does the things that nobody wants to do, and she does them consistently, so that’s why she has to stay on the court.”

There were some familiar faces on Towson’s (3-2) bench at Suncoast Credit Union Arena. Its head coach, Laura Harper, helped lead the Terps to the 2006 National Championship under current head coach Brenda Frese. Harper is in her first season in charge of the Tigers and is joined by former Maryland video coordinator Joe Glowacki, who spent six seasons on Frese’s staff.

A day after suffering a surprise defeat to DePaul, Frese inserted sophomore guard Shyanne Sellers into the starting lineup in place of Lavender Briggs, who has made just 24 percent of her shots and averaged 4.2 points per game this season.

The Florida transfer, who averaged over 19 points in her final season with the Gators, missed her first two shots and committed an early turnover. She finished scoreless on 0-for-5 shooting from the field in 21 minutes of play.

“As we continue to build the starting lineup, you know, isn’t set in stone,” Frese said. “I’m not sure moving forward that it’ll continue to be this way. It’s going to be really from half to half and game to game.”

Sellers had a productive opening 10 minutes in her first start of the season, logging two points, three rebounds, four assists and two steals. Late in the frame, Sellers grabbed a rebound, dodged her defender and floated a full-court pass to Miller, who laid in an uncontested two. Miller finished with a game-high 20 points and seven rebounds, while Sellers put up 14 points.

“I thought [Sellers] did a phenomenal job just the head of that press for us defensively,” Frese said. “She brought the motor, and she does every time, and she’s super aggressive. It gives us some great energy.”

“Kind of just do the same thing that I always do — bring defensive energy, make the right plays and be there for my team and help them push the pace,” Sellers said.

Despite holding Towson scoreless for the opening two and a half minutes, Maryland went into the first break up just two, mainly due to five turnovers and 12 points from the Tigers’ graduate guard Skye Williams, who finished with a team-high 19. But after the early giveaways, the Terps finished with 11 total turnovers.

“[Williams] I thought just single-handedly, her 15 points were a big difference in that first half, but I thought we settled in the second half. Defensively, we were able to make more stops,” Frese said.

Frese has used her freshman in a situation-by-situation basis; on Friday against DePaul, Bri McDaniel, Gia Cooke and Ava Sciolla all entered the game in the first quarter. However, against Towson, a first-year didn’t debut until Mila Reynolds checked in at 7:31 in the second. But McDaniel, Cooke and Reynolds combined for nine points, seven rebounds, three assists and a plus-two plus-minus in 21 minutes.

“That’s where you want your freshman to respond to those minutes that they get,” Frese said. “And they take them and allow us to be successful.”

The second saw Maryland go on a 6-0 run to start the quarter, only to have Towson respond with an eight-point swing of its own. But the Terps took a five-point lead at the half after closing on a 7-0 run where the Tigers went almost three minutes without a field goal and committed three turnovers.

Another scoring drought — Towson didn’t score in the final 3:30 of the third — helped Maryland to a cushy eight-point advantage heading into the final frame.

And even after Miller picked up her fourth foul with 7:58 left in the fourth, the Terps’ lead stretched to 15 points. When Miller reentered at 2:44, she immediately got a block and hit a two to maintain Maryland’s double-digit advantage.

Freshman guard India Johnston notched 17 points, and redshirt junior guard Kylie Kornegay-Lucas had 16 but made just six of her 24 shots as the Tigers hung around but never mounted a comeback against the Terps.