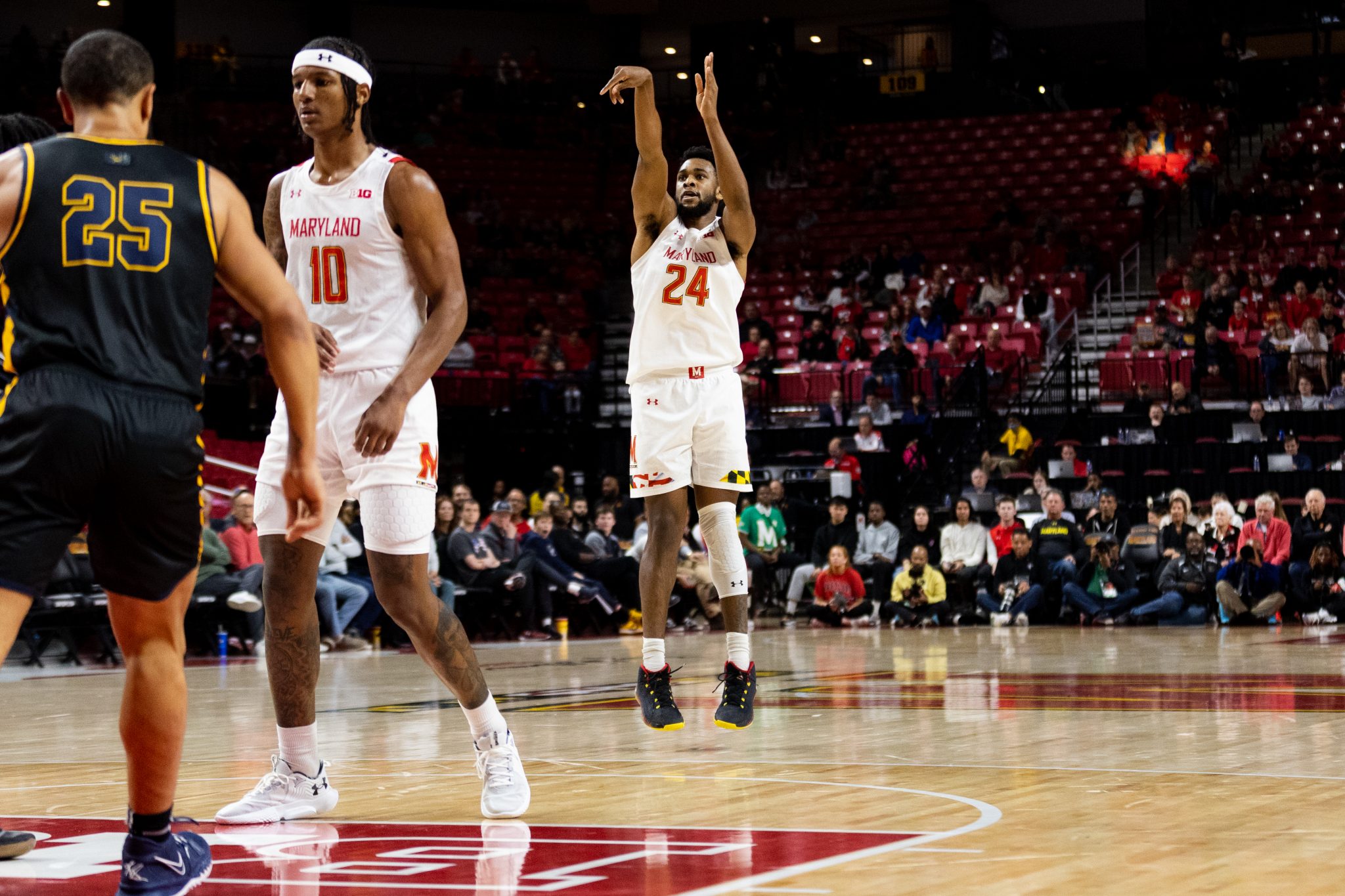 After struggling to get its three-point attempts to fall in the first half, Maryland started the second half by heaving up five consecutive shots from behind the arc.

Every single one of them fell.

Makes from Donta Scott, Don Carey and Hakim Hart helped No. 22 Maryland men’s basketball cruise to a 79-54 victory over a winless Louisville Tuesday in its first true road game of the season to advance to 7-0 for the 10th time in program history.

“In the second half our offensive intensity was really good,” coach Kevin Willard said. “I thought we got really good inside-out threes, but I thought we were a little bit more focused on the offensive end,” he said.

Jahmir Young scored seven of the Terps’ first 11 points and added a steal to help coach Kevin Willard’s squad out to an early lead.

The Cardinals enjoyed early success on the offensive boards but struggled to take advantage of their extra possessions. Louisville gave the ball back to Maryland with five turnovers in the first seven minutes of the game. The home squad finished the first half with eight turnovers and totaled 13 in the game.

Ian Martinez hit a corner three-pointer in transition after Louisville’s fifth turnover to cap off a 13-0 Terps run that gave Maryland an 18-4 lead with 13 minutes left in the first half.

However, the Terps struggled offensively as the half continued, finishing the opening 20 minutes 14-30 from the field and 3-13 from behind the arc. Maryland notched 37 points in the first half, its lowest mark since its second game of the season against Western Carolina.

Willard’s squad’s offensive struggles allowed the Cardinals to cut the Terps’ lead to single digits multiple times toward the end of the first half.

El Ellis, Louisville’s top scorer this season, made the Cardinals’ first three-pointer of the game with just over two minutes left in the first half to cut Maryland’s lead to eight. Even though the Terps struggled to shoot efficiently, Ellis’ struggles to carry a toothless Louisville offense helped Maryland lead 37-26 at halftime.

“They don’t play that many guards, it’s like they play [Ellis] and four big guys,” Willard said. “So it was kind of simple, just really making [Ellis] score difficult twos and then make everyone else try to make a play.”

His nine first-half points were enough for the Cardinals to stay competitive through 20 minutes, but the Terps took a comfortable lead once their shots began to fall in the second half.

Maryland’s five consecutive three-pointers to start the latter period ballooned the Terps’ advantage. Scott got two of those attempts to fall to add to a 12-point first-half performance as the senior finished the game with 18.

[Maryland men’s basketball moves up to No. 22 in AP poll]

Willard’s squad paired its hot start to the second half with an effective defense, holding Louisville without a single point for a stretch of over four minutes.

The Terps used the Cardinals’ struggles to go on a lengthy 12-1 run that included four points from Noah Batchelor off the bench. Their lead grew as large as 30 with about six minutes remaining.

Jahmir Young ended a brief Louisville run with the game already out of hand with a free throw and a steal before heading to the bench to end his night. The Charlotte transfer finished the game with 15 points, five rebounds, five assists and three steals.

“That was the best game [Young’s] played so far for us,” Willard said. “I think he’s starting to understand his role as a point guard. You know, at Charlotte, he was more of a combo guard, more of a scoring guard … What I’m seeing is a young man that’s developing very quickly into understanding of how to play the point guard spot.”

Maryland passed its first road test of the year with ease, taking down the winless Cardinals. The Terps will return home Friday for a much tougher challenge against No. 16 Illinois.