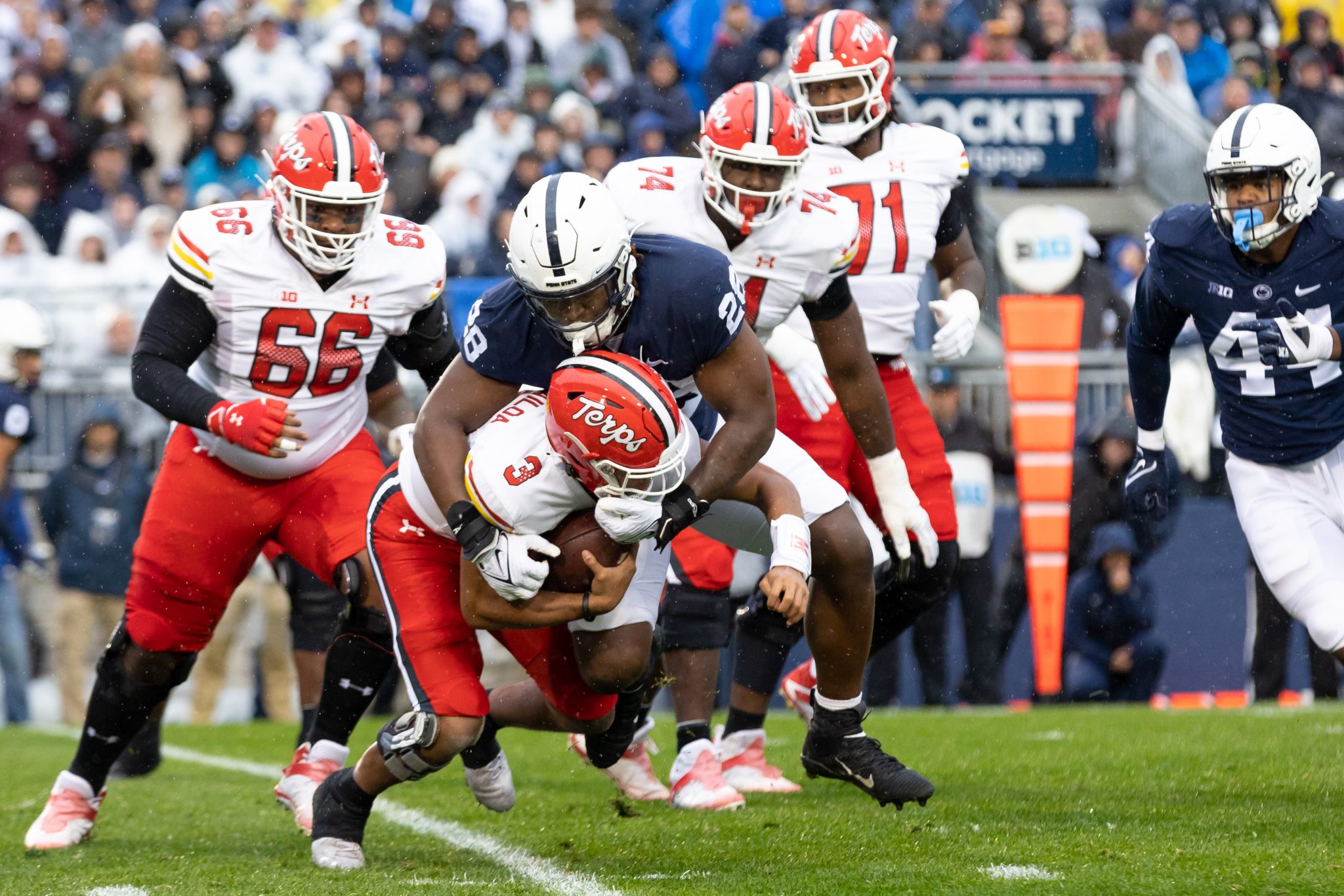 The Terps couldn’t yet claim their cross-border foes as nemeses without reducing the long-standing imbalance between the squads, he said, especially after losing six of the last seven matchups.

Saturday’s game did little to narrow that gap.

The Nittany Lions dismissed any notion that the two programs stood on the same platform in a 30-0 bludgeoning that saw the Terps dominated on both sides of the ball in University Park. Maryland’s all-time record against Penn State dropped to 3-42-1, while the Terps suffered their third loss of the Locksley era at the hands of James Franklin’s squad.

[Maryland football’s best receivers have gotten fewer touches, but its offense has improved]

Quarterback Taulia Tagovailoa, who suffered an MCL sprain against Indiana on Oct. 15, found himself repeatedly rushed out of a deteriorating pocket.

Without Lunsford, the Terps shifted starting center Johari Branch to left guard and rotated backups Coltin Deery and Aric Harris at center. The unit struggled to keep their quarterback upright, especially early in the game.

The Penn State defense sacked Tagovailoa twice before he completed his first pass. His first completion came on the Terps’ third drive of the game, a harbinger of a dismal performance where he completed just 11 of 22 passes for 74 yards before being replaced by Billy Edwards Jr. with just over eight minutes left.

“I think [Tagovailoa] is just like the rest of us on the offensive side of the ball,” Locksley said. “We haven’t played very well, we haven’t executed.”

Maryland’s starting quarterback threw for under 100 yards for the second straight game after a 77-yard performance against Wisconsin last week — an outing where he was sacked five times.

At the end of the first quarter, the Terps amassed just three total yards, the product of having two of its 12 total plays in the frame end in sacks.

The fifth sack on Tagovailoa came from Demeioun “Chop” Robinson, a former five-star recruit who transferred from Maryland to Penn State after one season in College Park. The Nittany Lions named Robinson, a Quince Orchard High School graduate, a captain for the contest against his former team. He dominated the matchup he dominated en route to two sacks and two tackles for loss.

“I don’t know what Chop did, I haven’t looked at the stat sheet,” Locksley said. “I know they pressured our quarterback quite a bit today, not just Chop but all across the board.”

Just one of Maryland’s first eight drives lasted longer than four plays, a nine-play foray into Penn State territory that ended with a turnover on downs. The anemic offense forced punter Colton Spangler into action eight times a week after he punted seven times against Wisconsin.

Roman Hemby found occasional success in a 68-yard rushing performance, but Penn State racked up nine tackles for loss and limited Maryland to just 3.6 in sack-adjusted rush yards per carry.

“We know that the plays that we needed to make were there,” Hemby said. “We just were one block away, one step away, one cut away.”

Both of his scores came on fourth down and ones, plays where he scampered for 45 and 27 yard-gains that each ended in the end zone.

The latter came with cornerback Deonte Banks desperately clinging to his back and being dragged along, a fitting picture for a game where the Terps tried to stick with a supposed regional rival but were instead once again dismissed as inferiors.