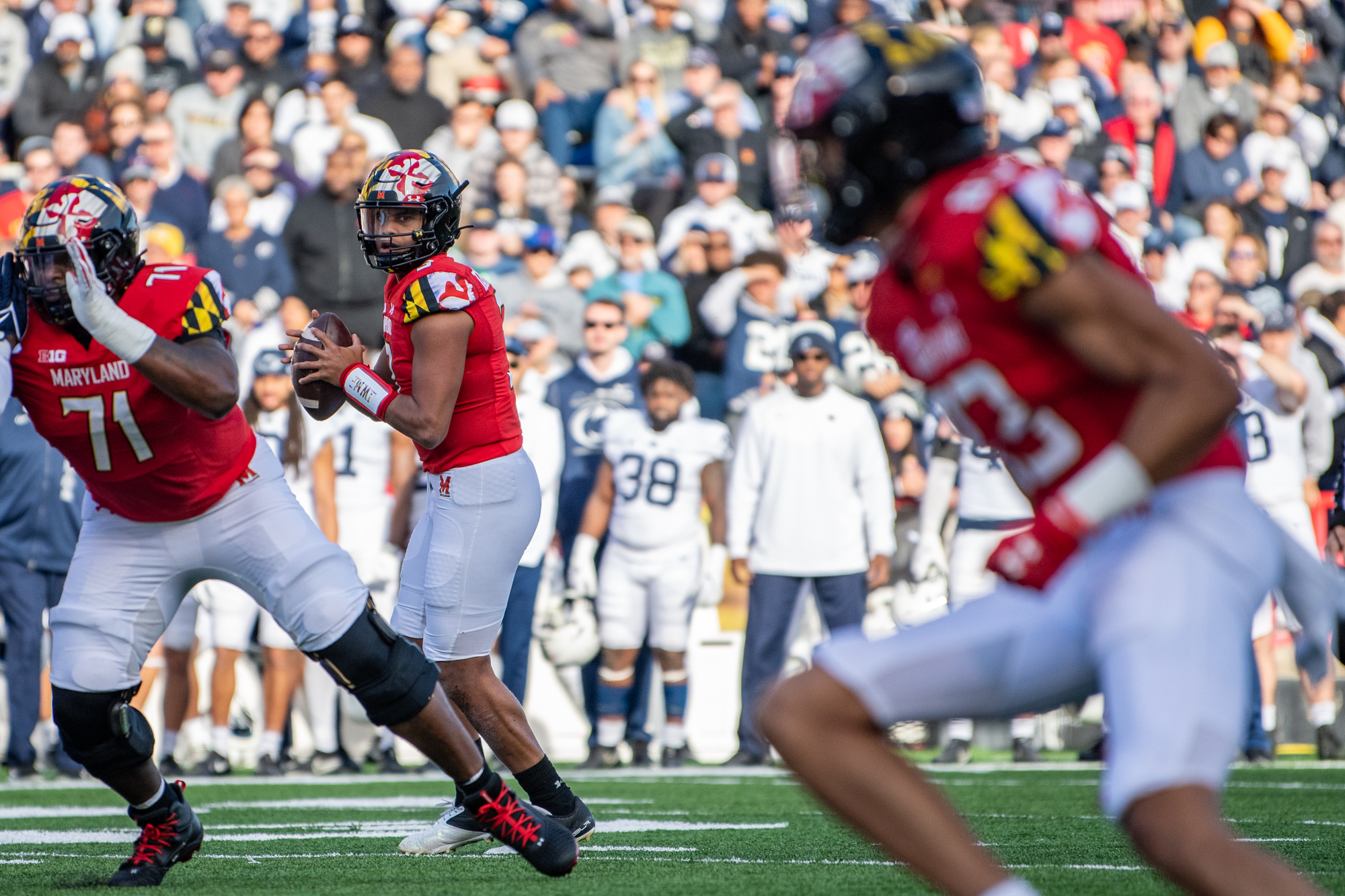 Taulia Tagovailoa searches for an open receiver during Maryland football's 31-14 loss to No. 22 Penn State on Nov. 6, 2021. (Joe Ryan/The Diamondback)

When Mike Locksley addressed his team at the beginning of the week, he made it clear there is no rivalry between Maryland football and Penn State.

“We have to compete a little better to get it to that point,” he said.

Locksley has reason to downplay the Terps’ competitiveness against the Nittany Lions given the program’s track record. Maryland is 3-41-1 against Penn State all-time and has lost six of its last seven games against its neighbor from Pennsylvania.

Despite the Terps’ continued struggles against the Nittany Lions, the game brings “a little extra juice” for some of Maryland’s players as they prepare to line up against a team in close vicinity to College Park to attempt to change the matchup’s lopsided narrative.

“[Penn State’s] natural geographical location to us makes this game kind of one of those games,” Locksley said.

Wide receiver Jeshaun Jones has been there for three losses to the Nittany Lions since his freshman season in College Park. He played in the team’s 38-3 loss to Penn State in 2018, a defeat that cost his team a chance at bowl eligibility following a 3-1 start.

He was a part of the program, albeit injured, when Penn State came to College Park under the Friday night lights in 2019 and wiped the floor with the Terps in a 59-0 drubbing. He knows how arduous a challenge the Nittany Lions pose and how difficult it is to leave Happy Valley with a win.

Linebacker Ruben Hyppolite II understands that struggle too. While his seven tackle, two-sack performance against Penn State in 2020 helped Maryland coast to a rare win on the road, it came amid a COVID-19 pandemic-altered 2020 season which barred fans from Beaver Stadium — a typically raucous environment.

“We’re not hanging our hat on that win, the atmosphere wasn’t there, obviously,” Hyppolite said. “We gotta go in and take care of our business.”

The Terps hosted the Nittany Lions the following year in 2021 and faced just a one-possession deficit heading into the fourth quarter, but ultimately failed to continue their winning ways in a 31-14 loss.

That loss preceded two more defeats to Michigan and Michigan State, respectively, forcing Maryland to fight for its bowl game bid in that season’s final game against Rutgers.

Locksley understands the nature of his team’s history against the Nittany Lions. He also understands the relationships his players may have with their opponents given the local recruiting battles between the two programs in the Washington, D.C.-Maryland-Virginia area.

“They’re a regional team that’s really close, that comes into our area to recruit, there are a lot of natural relationships because of the location of both universities,” he said.

“A lot of [Penn State’s] guys are from around here and a lot of the guys know each other, like know guys on the team, and I feel like that’s what kind of adds the juice to it,” Jones said.

The Terps recognize the opportunity they have when the weekend’s conference bout rolls around. To Locksley, Saturday’s game is a measuring stick for his program’s growth in the Big Ten.

Doing so against a potent Penn State foe would be a rare feat for a team looking to — one day — make the game a rivalry.