Ezekiel Avit wanted to be a basketball player. A Maryland football offer changed his mind. 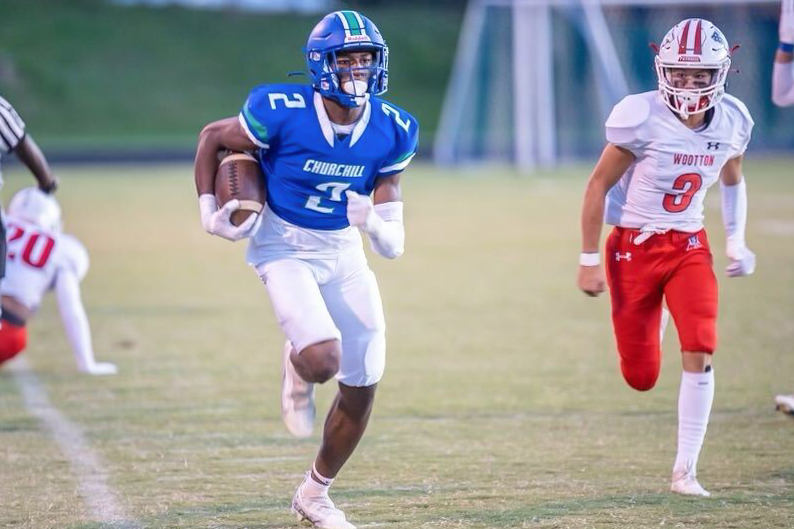 When wide receiver Ezekiel Avit first transferred to Winston Churchill High School in 2021, his coach didn’t think of him as a football prospect.

“It was kind of just labeled as Zeke is the basketball player and younger brother David is the football player,” Churchill football coach Joe Rydzewski said. “But then, I’m watching him play basketball and I’m like, ‘We gotta get this dude.’”

Avit had always been a basketball player, he told The Diamondback. He just played football for fun with his friends.

On Oct. 1, he committed to Maryland — following in the footsteps of Stefon Diggs and Rakim Jarrett as local talents who chose the Terps to represent their home state.

“I never really thought I was gonna take football to the next level,” Avit said. “Just being able to go to a school where [Diggs] played … and just all the history is really exciting.”

Avit played football at Urbana High School but “didn’t have the looks,” according to Rydzewski. But Churchill’s coach saw his potential. He started contacting all the Football Championship Subdivision schools he knew, hoping one would give him an offer to encourage him to play.

“We were able to bring in some guys to get looks at him,” Rydzewski said. “The first time, he was nervous. [He] didn’t really know why someone was there to talk to him about football.”

But as soon as he started practicing, Avit proved his new coach wrong.

“He outworks everybody at practice,” Rydzewski said. “He’s still not rah-rah about it, but you know that he’s outworking you.”

“It’s funny if you actually legit have a conversation with him … after you’ve seen him play, you kind of get a little standoffish because you’re almost just like, is he even interested?” Blumenthal said. “He’s such a quiet and humble kid off the playing surface.”

Avit was an avid two-sport athlete. The skills that helped him shine as a basketball player also made him a dangerous wide receiver, according to Avit.

“Basketball’s a fast-paced game, so I’m always on my feet and making cuts, crossovers — it just correlates to football,” Avit said. “I’m really like a bouncy guy.”

Still, Avit considered himself a basketball player above all else — until he attended a Maryland football camp over the summer.

Soon after, Maryland became the first and only Power Five school to give Avit an offer.

“I got the offer and it really just changed my mind about what I wanted to do in the future,” Avit said. “That’s when I became really like a football player.”

In September, he received an offer from Siena to play Division I college basketball. While he had started to focus more on football, Blumenthal recalled Avit debating the offers, unsure about which path to choose.

A few games into his senior season, he made up his mind. He often attended Maryland football games and had met a few of the players. He also credited his talks with Brewer, who has previously worked to develop players such as Randy Moss and Dez Bryant, as another reason for his choice.

“[Brewer] told me I had a future in football,” Avit said. “And I really do believe him. Seeing the past products that he’s taken to the league and the people that he’s coached before, I can really trust him.”

The choice still seemed bittersweet for Avit after committing to Maryland in October, according to his high school football coach.

“Basketball is definitely his first love,” Rydzewski said. “He’s able to kind of step back and see where football could possibly take him.”

Avit committed as an unranked, relatively unknown receiver with no other major football offers. However, he impressed Maryland enough to receive a scholarship offer.

“[I’m] trying to show that I’m just not some random kid that they just offered,” Avit said.

Since he committed, 247Sports, Rivals and On3 ranked him as a three-star prospect.