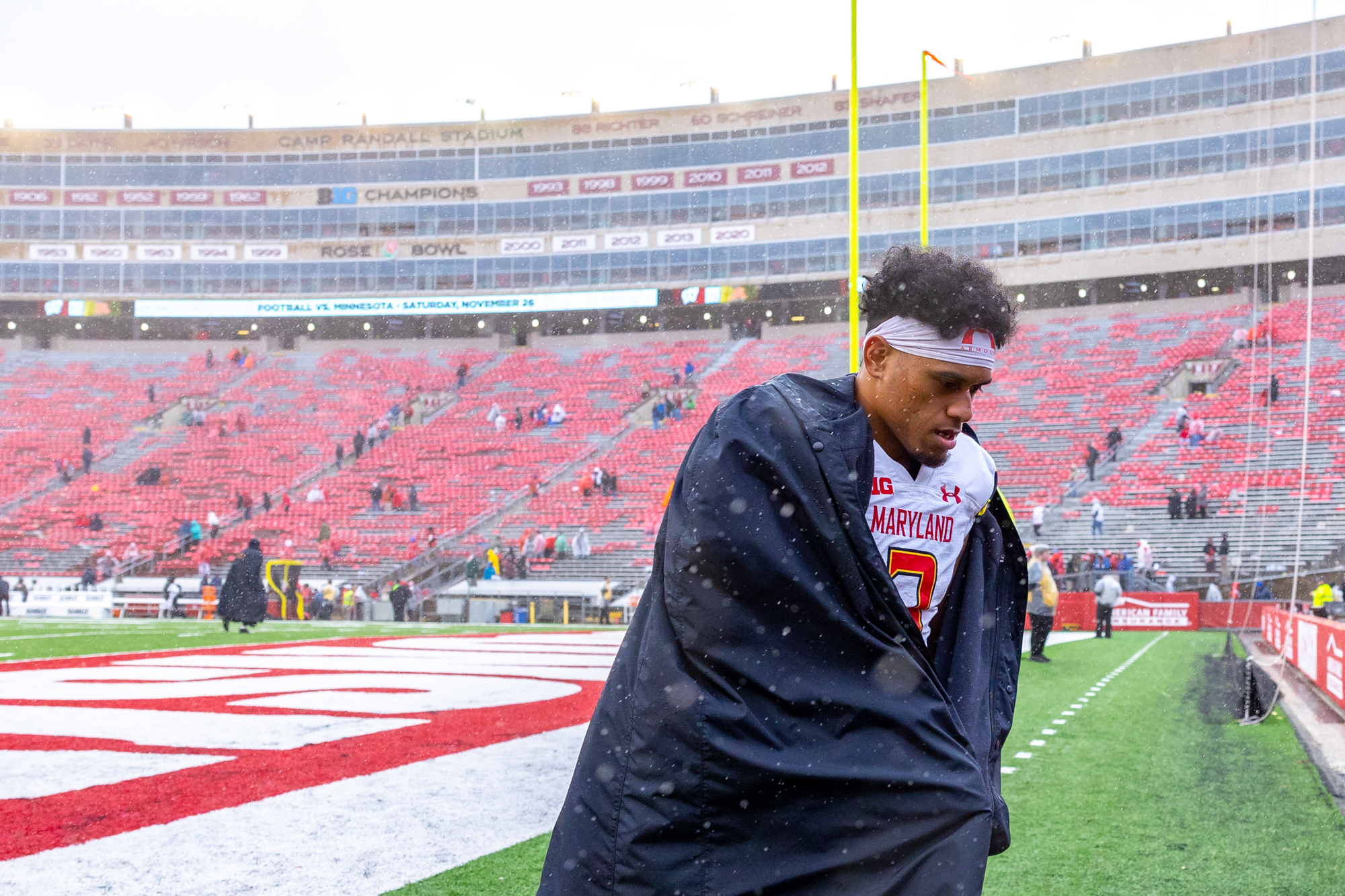 Taulia Tagovailoa walks back to the locker room after Maryland football’s 23-10 loss to Wisconsin on Nov. 5, 2022. (Cam Andrews/The Diamondback)

The Terps performed “wet ball” drills on Oct. 31 to prepare them for the incoming inclement weather predicted in Madison, Wisconsin.

Coming off of a bye week that helped them welcome back a slew of injured starters including quarterback Taulia Tagovailoa, coach Mike Locksley expressed pleasure in the Terps’ readiness for their matchup with the Badgers.

“I thought we had a really good week and a half of preparation for this game,” he said.

But his squad didn’t capitalize on their pregame work in a disappointing 23-10 loss.

Maryland football struggled to adapt to the adverse elements as rain squalled and wind billowed over Camp Randall Stadium on a dreary afternoon in Madison, Wisconsin.

A stagnant offensive start coupled with a run defense that allowed 278 yards resulted in the team’s most lopsided defeat of the 2022 season.

“It didn’t seem as though [Wisconsin was] as affected by the elements as we were,” Locksley said. “It starts with me as the head coach and everybody staff-wise including our players … didn’t play our best today.”

The Terps’ struggles with the field conditions began on the opening play when backup quarterback Billy Edwards Jr. trotted onto the field in lieu of Tagovailoa for the game’s first snap.

The rain crescendoed just before kickoff, making it hard for Tagovailoa to see through his visor. He was forced to remain on the sideline to remove it from his helmet.

Tagovailoa entered the game on the second play but exited after the third as his seven-yard scramble came up short on third down. The failure to convert a first down brought on punter Colton Spangler for the first of his six first half punts.

Tagovailoa dropped back to pass sparingly throughout the game. He attempted just six passes in the first half and only completed three. Locksley and the Maryland coaching staff took the ball out of their quarterback’s hands and instead leaned on the running backs, an adjustment the coach said was made due to the weather.

“We knew because of the wind and rain that it would probably end up being one of those [run-heavy] games, we had a real good plan going into it,” Locksley said. “But sometimes the best-laid plans don’t work out the way you expect them to, and it didn’t today.”

Maryland and Wisconsin relied on their running backs as a result of the rain, but the Terps’ backfield couldn’t keep up with the Badgers’. Three Wisconsin running backs tallied a run of 20 yards or more while the Terps were held to just 2.7 yards per rush on the afternoon.

Badger running back Isaac Guerendo’s 89-yard touchdown run in the second quarter came amid a slew of missed tackles — Maryland’s defenders beaded off of Guerendo’s cardinal red jersey like rain droplets as he scampered to the end zone and celebrated with his teammates.

Maryland’s defense eventually hardened, holding Wisconsin without a touchdown in the second half. But Tagovailoa and the offense continuously struggled with the conditions as the game grew increasingly out of hand.

Center Coltin Deery botched multiple snaps due to the lack of grip on the ball, a struggle that proved damning for the Terps in a game they seemingly never had a firm grasp on.