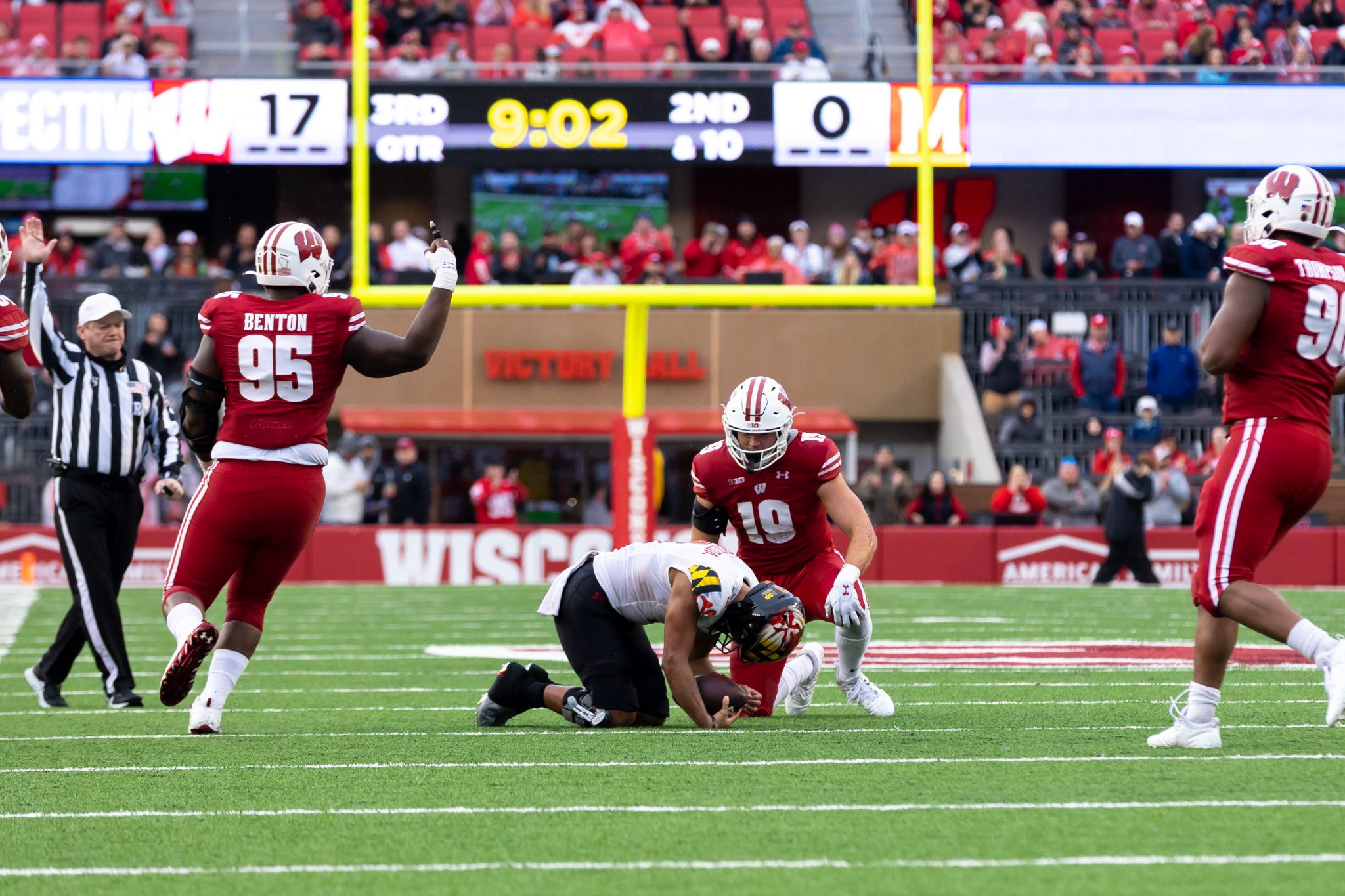 Taulia Tagovailoa on the ground following a sack during Maryland football’s 23-10 loss to Wisconsin on Nov. 5, 2022. (Cam Andrews/The Diamondback)

Taulia Tagovailoa watched in dismay as a Roman Hemby third-down rush was blown up by a free Wisconsin defender. He stood a few yards behind the play with his hands atop his helmet.

That defender, Kamo’i Latu, flexed his biceps as he celebrated with his teammates. He backed up as he did so and unintentionally bumped into Maryland football’s quarterback.

On a day where swirling rain and 20-mile-per-hour winds buffeted Camp Randall Stadium throughout the game, the play marked one of the many times Tagovailoa was hit by a Wisconsin defender in an ugly 23-10 loss Saturday.

A well-schemed Badger pressure unit tallied five sacks and three quarterback hits as the Terps repeatedly put themselves into long third down attempts with early-down runs and untimely mistakes.

“Our plan, we knew because of the wind and rain that it would probably end up being one of those [run-heavy] games,” head coach Mike Locksley said.

Each of Maryland’s first five drives started with runs, as offensive coordinator Dan Enos chose to run behind a reshaped offensive line. Mason Lunsford missed the game after entering concussion protocol, according to Locksley, moving Johari Branch to left guard and sliding freshman Coltin Deery into the lineup as the starting center.

The Terps found some success on the ground in the second quarter, as Hemby gained 19 yards on the first two carries of the drive. But Deery’s next snap barely got off the ground, forcing Tagovailoa to dive on it for a nine-yard loss in a drive that led to a punt after a failed third and 12 conversion.

Maryland went 5-17 on third down in part because they needed eight yards on average to convert those opportunities.

On Tagovailoa’s second sack of the game, Maryland faced a third and six. Wisconsin showed four rushers on the line of scrimmage but dropped one of those players back into coverage and sent a linebacker to rush toward left tackle Jaelyn Duncan.

The imbalance rush left Duncan needing to block two players. He chose the linebacker on the inside, allowing Nick Herbig to run free and bring down Tagovailoa for a six-yard sack.

Locksley cited poor protection from Maryland’s running backs as a reason for Wisconsin’s consistent pressure, saying that they struggled to stay in front of blitzing defenders.

“Our backs in protection weren’t firm enough a lot of the time,” he said. “But again, it takes everybody. I’m not singling out the backs but a lot of the pressure we got came from the linebacker pressures that usually we do a really good job of protecting.”

In total, the Terps went three-and-out on six of their 14 total drives and punted a season-high eight times. Tagovailoa said he felt the Terps built rhythm on the rare instances where they gained a first down.