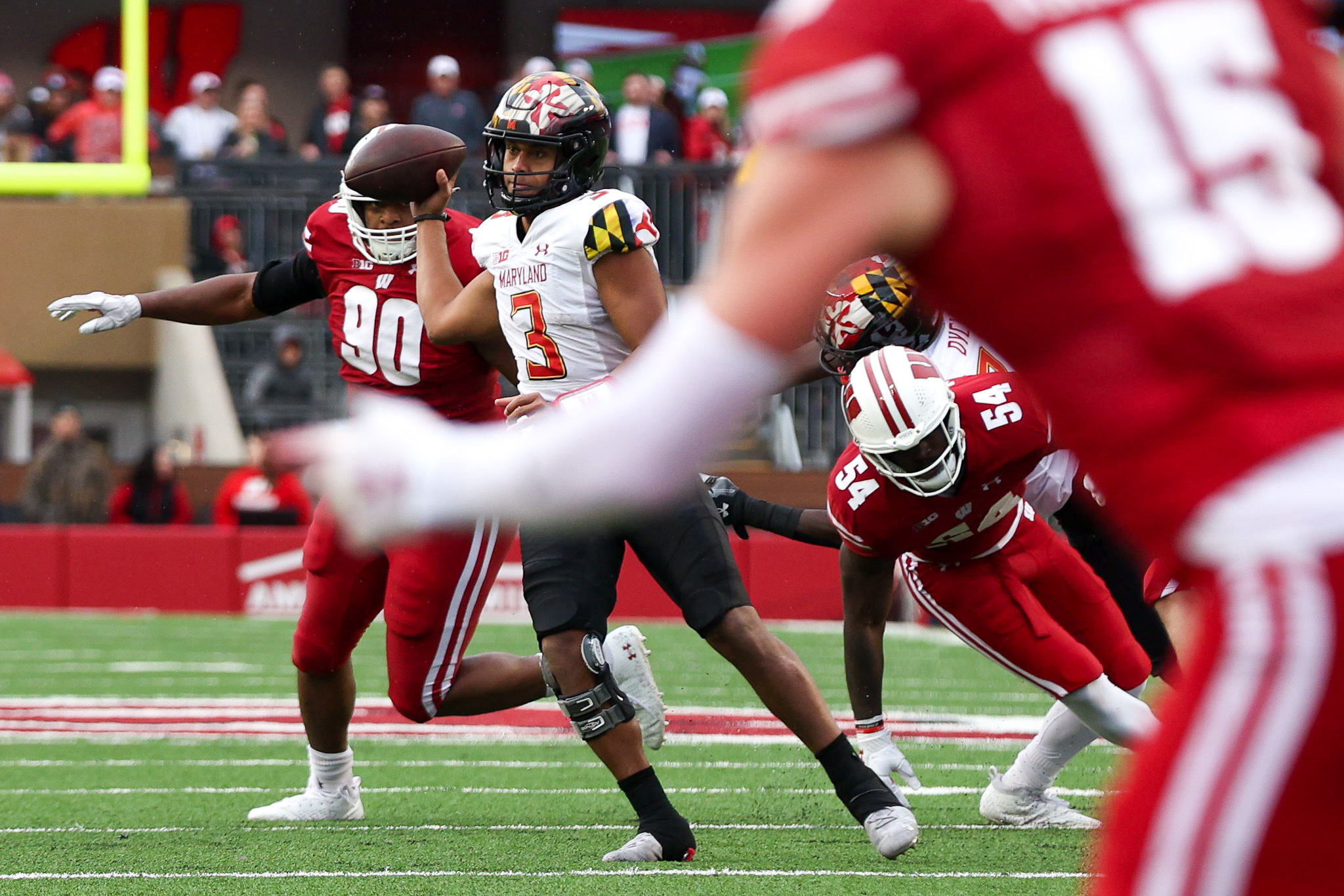 MADISON, Wis. – Taulia Tagovailoa had completed just five passes early in the fourth quarter when he located a streaking Octavian Smith Jr. across the middle of the field. Desperate to make an impact play on a day absent of any offensive sizzle, he fired a dart in Smith’s direction.

But Hunter Wohler read the play perfectly. The safety stepped in front of Tagovailoa’s pass and nabbed it out of the air, putting an abrupt end to the Terps’ drive and fundamentally turning the lights out on their comeback attempt.

“I tried to step up in the pocket, tried to get the ball over [Wohler],” Tagovailoa said. “He made a great play on it.”

Maryland football faltered on the road in Madison, Wisconsin Saturday, falling to the Badgers 23-10. The loss prevented the Terps from their first 7-2 start since 2006 and their first win over Wisconsin in program history.

Tagovailoa struggled in his return to the starting lineup, completing just 10 of his 23 passes for 77 yards and one touchdown. The Terps’ 10-point output was by far their lowest of the season, snapping a 10-game streak of 27 or more points.

“I thought we had a really good week and a half of preparation for this game and it didn’t show up,” head coach Mike Locksley said.

When the clock struck zero, marking the end of the first quarter at Camp Randall Stadium, Maryland had yet to pick up a first down or register a single passing yard.

Despite Tagovailoa’s return after a one-game absence against Northwestern, the Terps’ offense sputtered in the first half. They went three-and-out on three of their first four possessions.

Their star quarterback attempted just six first-half passes as the wind swirled on a rain-soaked field.

“It was really windy [and rainy] out there,” Tagovailoa said. “When the ball’s more wet you can’t really grip it that hard.”

The Terps ran the ball 16 times in the first half, but neither Roman Hemby, Antwain Littleton nor Ramon Brown could consistently crack the Badgers’ front line.

The offensive struggles forced Punter Colton Spangler into action six times, giving Wisconsin ample opportunity to rush out to a 17-0 edge as the teams jogged to their locker rooms at the end of the first half.

Head coach Mike Locksley’s squad was held scoreless in the first half for the first time all season, a period where the Terps gave up as many sacks as they completed passes.

Their struggles didn’t abate when they returned for the last two quarters. A promising opening drive for Maryland fizzled just outside the red zone and ended with a Ryland field goal.

Ending the Badger shutout bid didn’t lead to future Maryland success. The next three drives ended with a punt, an interception and a turnover on downs.

The last two drives set up Wisconsin deep in Terps’ territory, but the visitors’ defense held and allowed just three points. But Maryland‘s offense found itself with no forward momentum — punting on the next possession.

Tai Felton scored Maryland’s lone touchdown with under a minute left in the game.

While Maryland struggled to find its footing on the ground, the Badgers’ two-headed running attack of Braelon Allen and Isaac Guerendo feasted on the Terps’ defense.

An 89-yard Guerendo touchdown scamper in the second quarter was the highlight of a 233-yard day for the duo, who helped the Badgers average 6.4 yards per carry.

“They’re a good team, they scheme the same, they block the same no matter what defense you’re in,” lineman Greg China-Rose said. “They play hard for four quarters … give them all the credit.”

Wisconsin quarterback Graham Mertz completed just five passes but felt no urgency to push the ball down the field with his arm — the Badgers never trailed thanks to their efficiency on the ground.