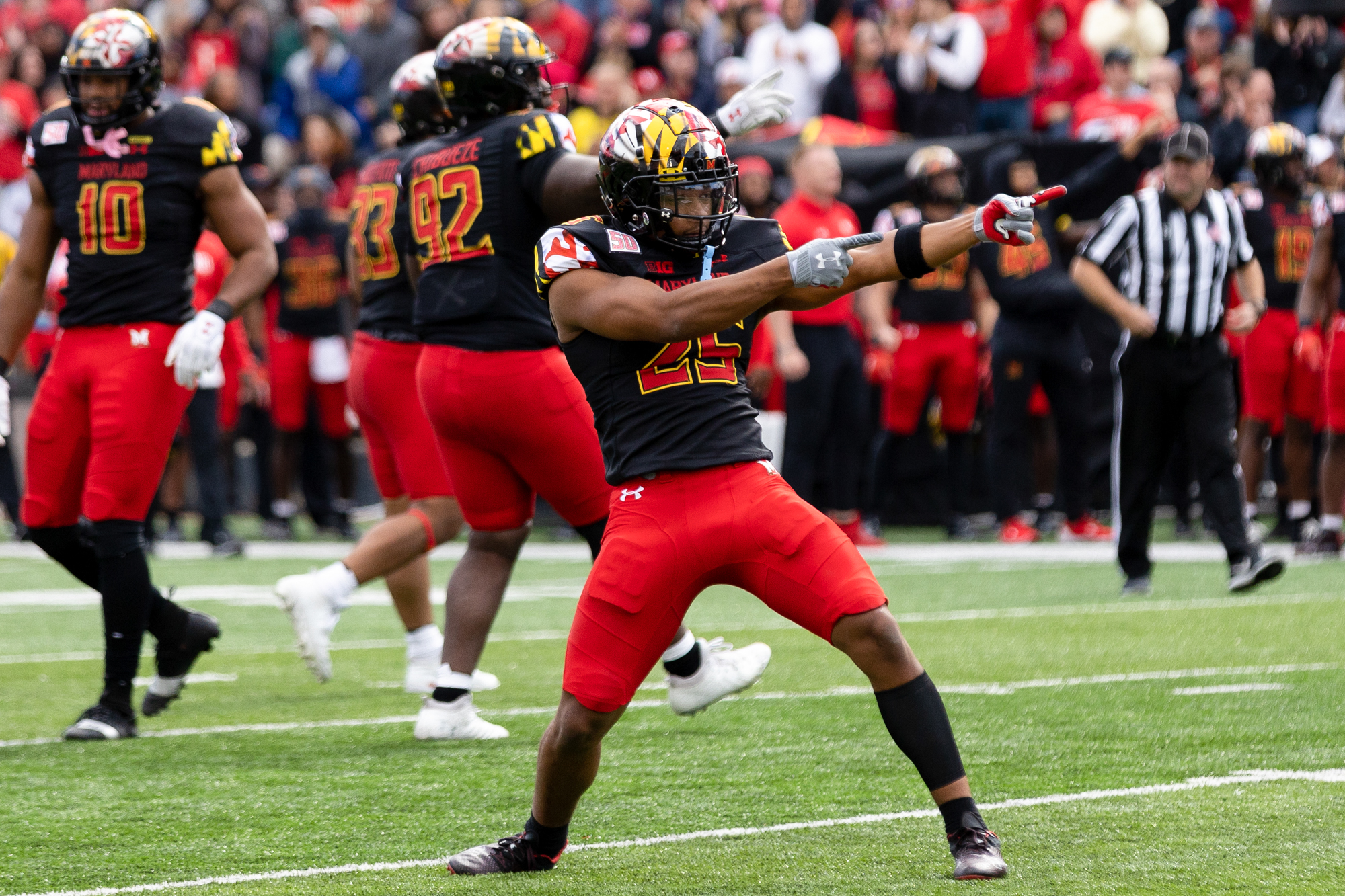 Dante Trader Jr. was so exhausted after grabbing an interception and running it back 23 yards that he couldn’t even do the celebration he and the rest of Maryland football’s defense had planned.

The interception came with Maryland down a touchdown to Northwestern and swung the trajectory of a game the home squad would ultimately close out when Trader’s partner at safety, junior Beau Brade, grabbed his second pick of the year.

This time, the duo had more than enough energy to celebrate, griddying together to the sideline. Both players nabbed their second interceptions of the season in that game with their firsts coming in Maryland’s week 3 win over SMU.

“It’s kind of funny, you know, just every time one of us gets a pick, another one gets a pick,” Brade said.

The new starters have led the Terps’ defense in snaps played, bringing stability to a position group that saw both starters from last year’s squad graduate. Brade and Trader entered the season with zero total starts and have used their relationship to improve their on-field play.

They’ve also developed into leaders for the defense and have headlined a safety group that’s given itself a bone-chilling nickname — The Reapers.

Glendon Miller coined the title in the preseason as the position tried to establish a standard of physical play.

“We be hitting,” Brade said.

“Not saying too much, people don’t worry about you until you’re there, that’s the mentality,” said Trader, a sophomore. “I’m coming to strike you every play … I’ll take you out.”

Maryland’s players spend the night before games at The Hotel. The two room together, a conscious choice.

Trader asked Abir Chaudhry, the team’s football operations director, to put him with his backfield partner so the two can bounce notes off of each other before relaxing.

“That’s just building another connection that shows on the field,” Trader said.

When other teams run crossing routes, they’ll switch off assignments using hand signals in the place of words. That comfort comes from their preparation. The two don’t have much on-field experience, but senior cornerback Jakorian Bennett praised their “mature” mentality.

The two spend all of their time in the film room, according to Bennett. Coach Mike Locksley also praised the duo’s preparation, saying they’re asking safeties coach Wes Neighbors III “all the right questions” and have become the quarterbacks of defensive coordinator Brian Williams’ defense.

“They both are really working hard to be the ones that get us lined up correctly and get the communication the way it needs to be,” Locksley said.

Brade thought Trader might be a bit cocky at first because of his lacrosse accomplishments. But instead, the then-freshman came in and began working, asking Brade many questions and showing interest.

“I love that about him for real,” Brade said.

The older safety played a key role in bringing Trader along. During a summer installation of the team’s base defense, it was Brade who worked with him on the gaps and cones to better understand the scheme.

The biggest change Trader had to make came with embracing the reaper mentality, something he didn’t have to start.

“I was more a finesse safety, a pretty boy safety,” he said.

He knew that had to change, especially as he began playing against “grown men, 25-year-olds, and you’re stopping him from feeding his kid or something.”

Brade didn’t have that issue, stepping in on day one as an imposing hitter. He’s already forced a team-high two fumbles this year.

He knew Trader “always had a dog in him” and saw the physical part of his game grow over time. In the win over Northwestern, Brade recalled a crushing blow his safety-mate delivered that left the runner “down for a while.”

Developing that part of his game was essential if Trader was going to fit in with the rest of Maryland’s safeties.

“In the business, they have vision statements,” Brade said. “Being a Reaper is ours.”