Maryland football’s best receivers have gotten fewer touches, but its offense has improved 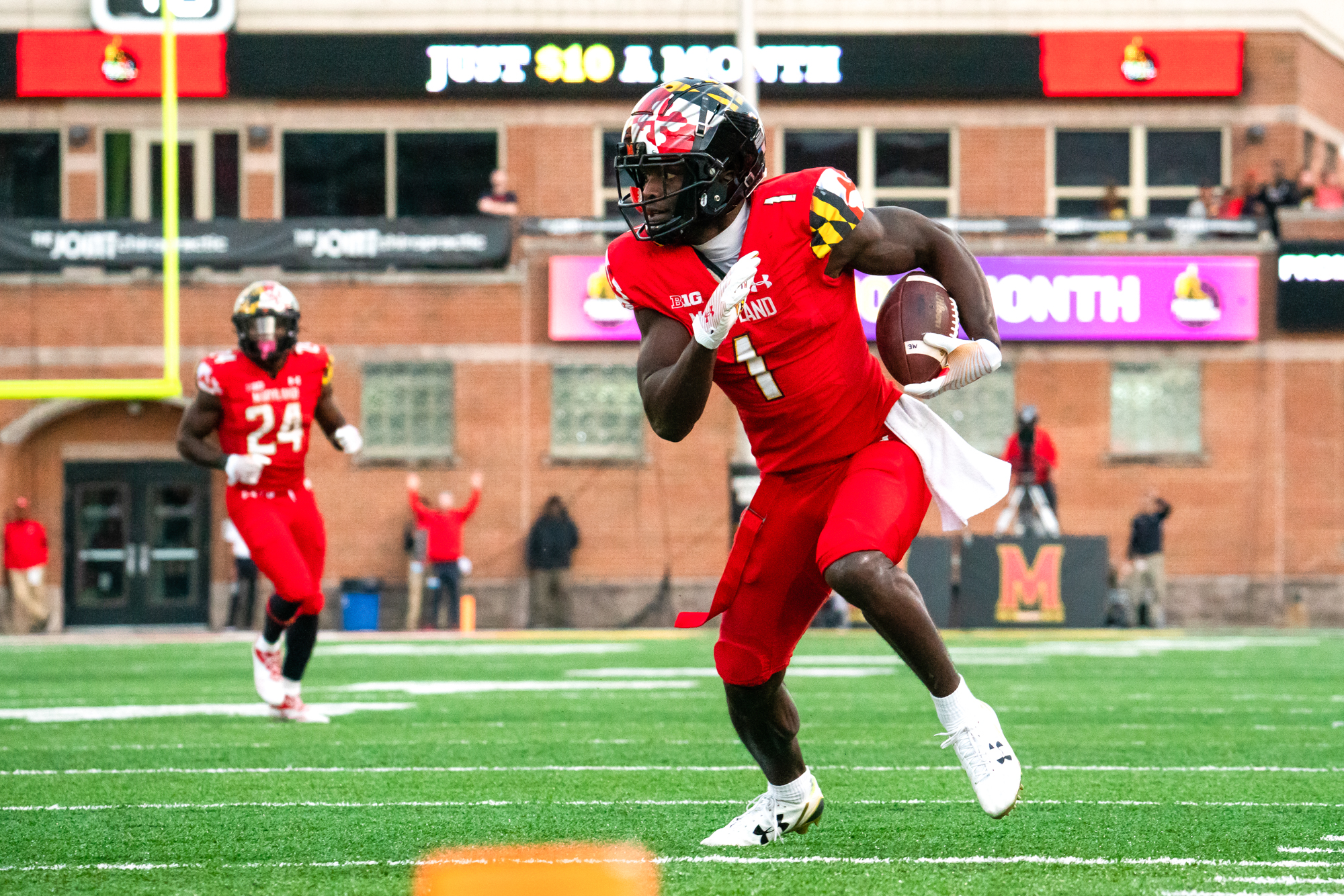 Mike Locksley knows how many touches he wants certain players on his team to get, a number he’ll write down on his call sheet to monitor in games.

Maryland football’s coach works to decide that number for each game and the rest of his coaching staff, led by offensive coordinator Dan Enos, designs a game plan and calls plays accordingly.

But the Terps have not reached those numbers on a consistent basis, the coach said. A combination of opposing defenses trying to take away Maryland’s best threats and Locksley’s egalitarian offensive philosophy have created a balanced attack that spreads the ball around.

While that approach has depressed the production of the Terps’ stars at wide receiver compared to their gaudy totals from a year ago, it hasn’t hurt their offense as a whole, a unit that’s performed better than the 2021 squad due to an improved running game.

“We have a lot of talented players on our offense,” Locksley said Tuesday. “I think the diversity that we’ve created with our tight ends, our backs, our receivers, typically make it a tough deal to defend because you don’t know where the ball is going.”

Quarterbacks Taulia Tagovailoa and backup Billy Edwards Jr. have completed passes to at least nine different players in seven of their nine games this year. Tagovailoa found eight different pass-catchers against SMU in the third game of the year and seven in a dismal rain-filled afternoon contest in Wisconsin Saturday.

Nine different players on Maryland’s offense have double-digit catches. The inherent advantage that provides, Locksley explained, is that defensive coaches can’t scheme specific players out of the game.

But the Terps’ may be doing that themselves with their heralded wide receivers.

The position group ranked No. 3 in CBS Sports’ preseason rankings but the quartet of Dontay Demus Jr., Rakim Jarrett, Jeshaun Jones and Jacob Copeland have yet to meet those lofty preseason expectations.

Jarrett averaged 4.8 catches and 63.8 yards per game a season ago, numbers that have dropped this year to 3.8 and 41.8, respectively. He’s notched just three games more than 50 yards all season after exceeding that figure nine times a year ago.

Demus’ decline in receiving production is starker. He played just five games last season and excelled in each one of those contests before tearing his ACL against Iowa — surpassing the 50-yard mark each time. He averaged 4.7 receptions and 84.5 yards per game in 2021, figures that have fallen to a mere 1.6 receptions and 17 yards per game this year.

The drop isn’t due to reduced opportunities on the field as Jarrett and Demus rank No. 1 and No. 3 in snaps for Maryland wide receivers this year. Lingering effects from the injury could be affecting Demus, but he maintains that he feels “100 percent.”

“I’m back and doing the things that I’ve done and I’m feeling good within my routes and everything,” he said before the Northwestern game. “I feel like I’m pretty much back on point.”

Demus’ fellow receivers have been solid but not spectacular so far. Copeland, the transfer from Florida, has only exceeded 100 yards once this year in a win over a Charlotte team that’s one of the worst in college football while Jones has yet to do so.

Despite those modest statistics, the Maryland offense is better this season than it was in 2021.

The Terps ranked No. 56 in the country last year in Game on Paper’s measure of expected points added, a stat that examines how many points an offense gained or lost on a specific play based on modeling that accounts for situational factors like score, down and distance.

They’ve jumped up to No. 40 this season, a ranking made more impressive by the fact that Game on paper was unable to track Maryland’s 56-point showing over Charlotte due to a lack of play-by-play data.

The uptick in offensive production comes primarily from an improved running game led by Roman Hemby. The Terps’ rushing offense ranks No. 45 in the country in rushing expected points added per play, well above their No. 73 rank last year.

Hemby has already more than doubled Tayon Fleet-Davis’ total rushing expected points added from a year ago despite running the ball 14 fewer times.

His ascension could also contribute to the diminished stat totals for Maryland’s receivers. Enos and the Terps have increased their rush attempts per game from last year while reducing passing attempts per game.

Maryland’s receivers, a group comprised of two three-stars, a four-star and a five-star, offer it unique talent. The team has effectively parlayed that talent into production — even if it hasn’t always come from that position group.

“We don’t try to force-feed the ball to players,” Locksley said. “We go in with a thought in our minds of how many times you want each guy to try to get the ball … and sometimes defenses defend it and the ball ends up going somewhere else.”