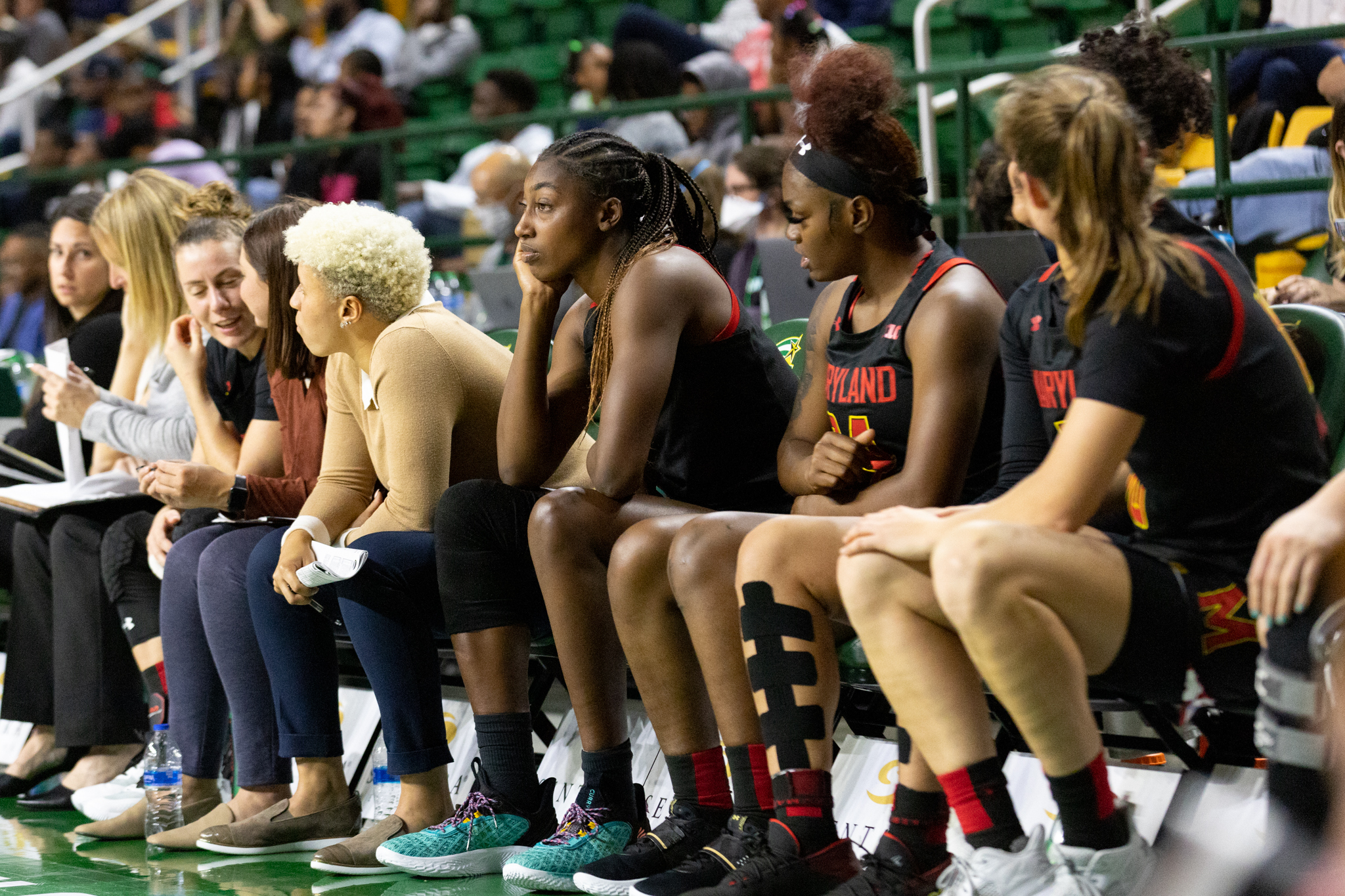 The most-remembered part of No. 17 Maryland women’s basketball’s season opener Monday against George Mason at Eagle Bank Arena is not that the Terps won 88-51. Nor will it be that all 12 players saw time.

The biggest takeaway was the right knee injury senior guard Diamond Miller suffered early in the second quarter, an ailment that forced her out of the game but one that the team didn’t seem overly-concerned about.

“It’s nothing too serious,” head coach Brenda Frese said of Miller’s injury. “We will continue to have her evaluated once we get back home but just more out of [precaution] — it’s a long season.”

Miller’s knee appeared to buckle with under 10 minutes left in the half, earning an oh-no-not-again look from the New Jersey native as she limped off the court. The guard had an April surgery for a right knee injury that cost her 10 games last season.

She will be reassessed when the team returns to College Park, per a team spokesperson. Emma Chardon also left the game after playing just four minutes. A team spokesperson said the team exercised caution with the sophomore forward.

Maryland expected to lean heavily on its senior captain this season after losing four of its five leading scorers from last year’s squad. In a symbol of that reliance, Miller scored the first basket of the match and had 11 first-quarter points as she swiftly cut through the Patriots’ defense.

“It was great to represent Maryland, first official game of the season,” Meyers said. “I was telling my teammates in the fourth quarter, I was like, ‘I’m impressed with us.’

“Just coming out not knowing in terms of expectations how we would take nerves in the first game and all, but I think that everyone just really stepped up.”

She returned to the sideline after halftime but didn’t re-enter the game as a precautionary measure but spent the second half coaching her teammates from the bench, talking with the coaching staff and applauding big shots.

“I’ve been around the game for six years, collegiately, so I should know my kind of game by now for me,” Meyers said. “I’ve had coach Frese just kind of stress, ‘Hey, like you’re a shooter, keep shooting,’ and I think that’s something you just learn over time.”

McDaniel made two of Maryland’s 12 three-pointers as the Terps shot over 50 percent from behind the arc.

“Bri’s gonna be special, super versatile,” Frese said. “I can’t believe she’s a freshman … It just speaks volumes of the jump that she’s made in the last month and just how talented she is. we need that versatility.”

The Terps entered cruise control after George Mason embarked on a near-six-minute scoring drought in the second quarter.

Maryland never trailed and stretched its lead as far as 37. It now holds a perfect 7-0 all-time record against George Mason.

“I think our freshmen stepped up a lot and came in and brought the intensity that might have been lacking,” Briggs said.

The Patriots’ anemic offense failed to score double-digit points in the first two quarters and went 5-for-22 from three and 16-for-55 from the field for the entire game.

But despite a 37-point victory, George Mason battled in the paint and on the glass, trailing Maryland 28-22 inside and 42-37 on the boards.

“Being able to play with my teammates, they’re all fun,” Briggs said. “They’re all very talented, and I think it’s gonna be a very special season.”