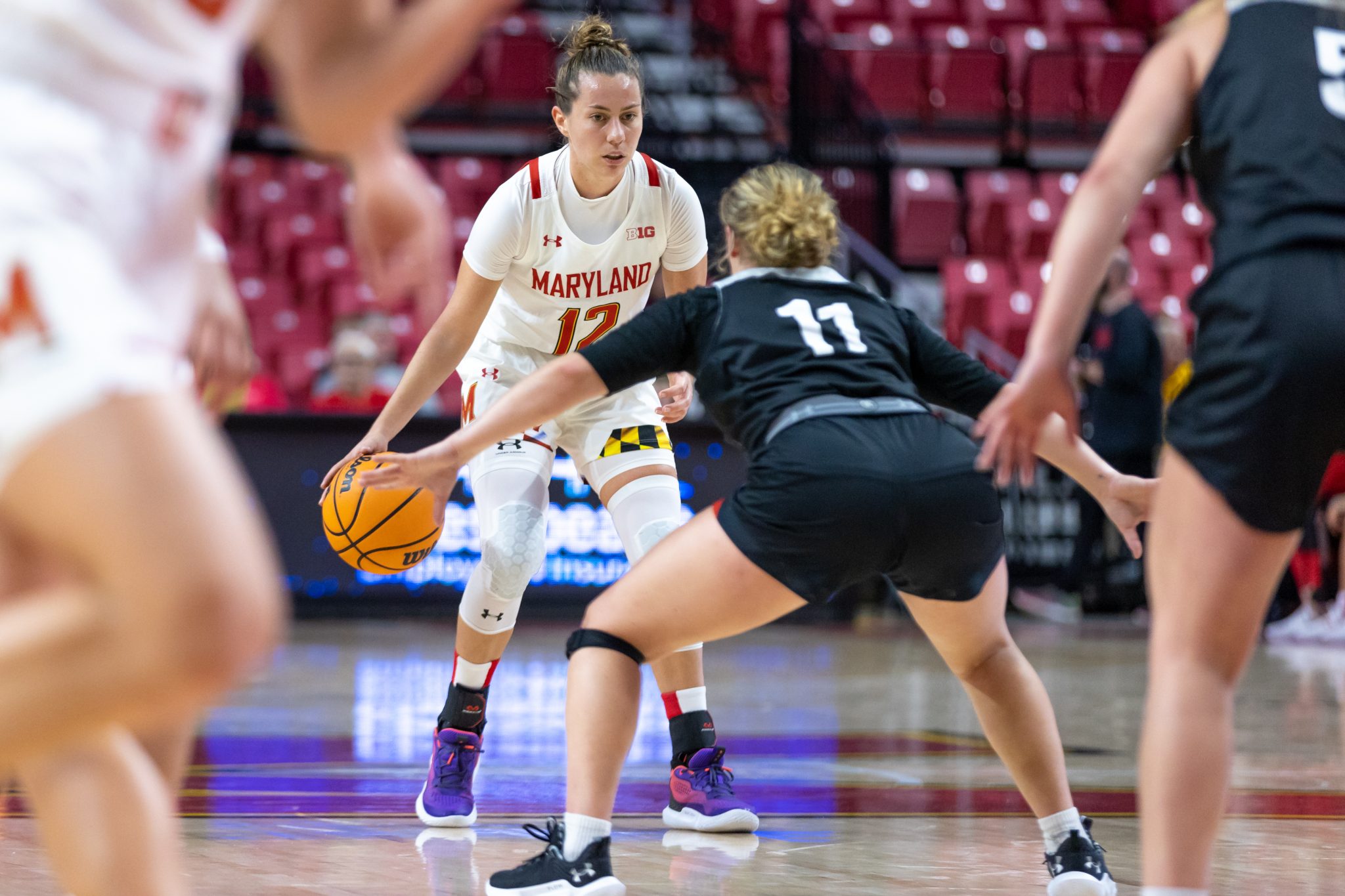 While she stared at several rectangular boxes on her computer screen, Elisa Pinzan committed to play for Maryland women’s basketball and coach Brenda Frese despite never having visited the university’s campus.

Pinzan previously had an hour-long call with Frese before meeting the rest of the coaching staff via Zoom. She also had the opportunity to talk with potential teammates. The graduate transfer from South Florida was blown away by how much of the conversation focused on getting to know her and not as much on “What will you do for us?”

“When coach Frese called me via Zoom, I didn’t even do an official visit,” Pinzan said. “I’m just like, ‘I’m committed.’ Just the way that she talked to me and the way that all the assistant coaches were supporting me, and they didn’t even know me, it was the first call. And it was just amazing, like the environment that call brought to my heart.”

Pinzan has always been a basketball aficionado, using any rim to get shots up. When winter weather forced Pinzan and her brother Luca indoors, the siblings practiced on a mini hoop that hung on the wall of their shared bedroom. They played various games — some of their own invention — and used an electronic dartboard to keep score.

Growing up in Murano, Italy, Pinzan trained with boys until she was 14 years old, when she was no longer allowed to play coed. But even though she wasn’t allowed to play with boys in formal settings, the younger sister still competed with Luca and his friends during pick-up matches.

“That helped me a lot to kind of change the perspective and see that you can do a lot more, you can improve a lot more,” Pinzan said. “So that was for sure a big point in my career.”

Pinzan, the 2021 American Athletic Conference Most Improved Player, had one of the nation’s best assist-to-turnover ratios last season at 2.25, a quality that distinguished her in a crowded transfer portal.

“I really wanted someone that could run an offense and put players in positions to be successful,” Frese said. “She can pass the snot out of the ball. She’s just got a vision that’s second to none.”

In the Terps’ first open scrimmage of the season, Pinzan grabbed a rebound and heaved a quarterback-like underhand pass to a teammate sprinting up the court, which led to an easy transition layup.

She then turned to the bench and flexed her arm, a nod to her foresight and passing acumen.

“It’s always been in my DNA to do some stuff like that,” Pinzan said of her stretch pass. “When I make the pass, I don’t think about, ‘Oh my God, that’s a tough pass,’ or, ‘I should have not done it.’ I see one [teammate] open, I’m just gonna throw the ball and because of my ability, I know it’s gonna get there.”

It was the first time Maryland fans witnessed Pinzan’s pinpoint passing ability, but that vision is typical for those who have watched since she was little.

“We are used to it,” Luca Pinzan said. “It’s a different way of amaze right now, but yeah, we’re still amazed by what she does sometimes on the court.”

“I don’t want to say it’s normal, but it is her style of basketball, her way of playing,” Fabio Pinzan, her father, said.

Many youth players begin their careers as guards and move positions as they grow, but Pinzan has always run the point.

Regardless of the team, point guard is her “major role,” and she intuitively understands how to operate within a team irrespective of familiarity with the offensive system or fellow teammates.

“Everything’s new for her, and she’s picked it up quicker than anyone,” Frese said. “She’s understanding where the ball needs to get to which players and how to command it.”

As one of nine new faces on the Terps’ roster this season, Pinzan has quickly had to learn her teammates’ tendencies, but Luca Pinzan knows his sister can thrive in such moments.

“She’s very good at understanding, very swiftly, how the other people play and how to make them comfortable on the court,” Luca Pinzan said. “She understands where the people are going before they actually go there.”

Pinzan has spent time with Reyer Venezia SPA in Italy’s top league and has represented the national team at the U18, U19 and U20 levels, participating in the European Championships and 2017 World Cup.

In the summers, Pinzan participated in local tournaments, sometimes competing with four or five different teams. She also spent time in the national setup and played club ball, which helped her rapidly adjust to new environments.

With the 2022-23 regular season tipping off Monday against George Mason, Pinzan will look to bring her blend of artful playmaking and dribble-drive scoring to Maryland’s offense. But above all else, the guard enjoys making her teammates look good.

“I love having fun,” Pinzan said. “I love making good assists for my teammates to be able to score.”