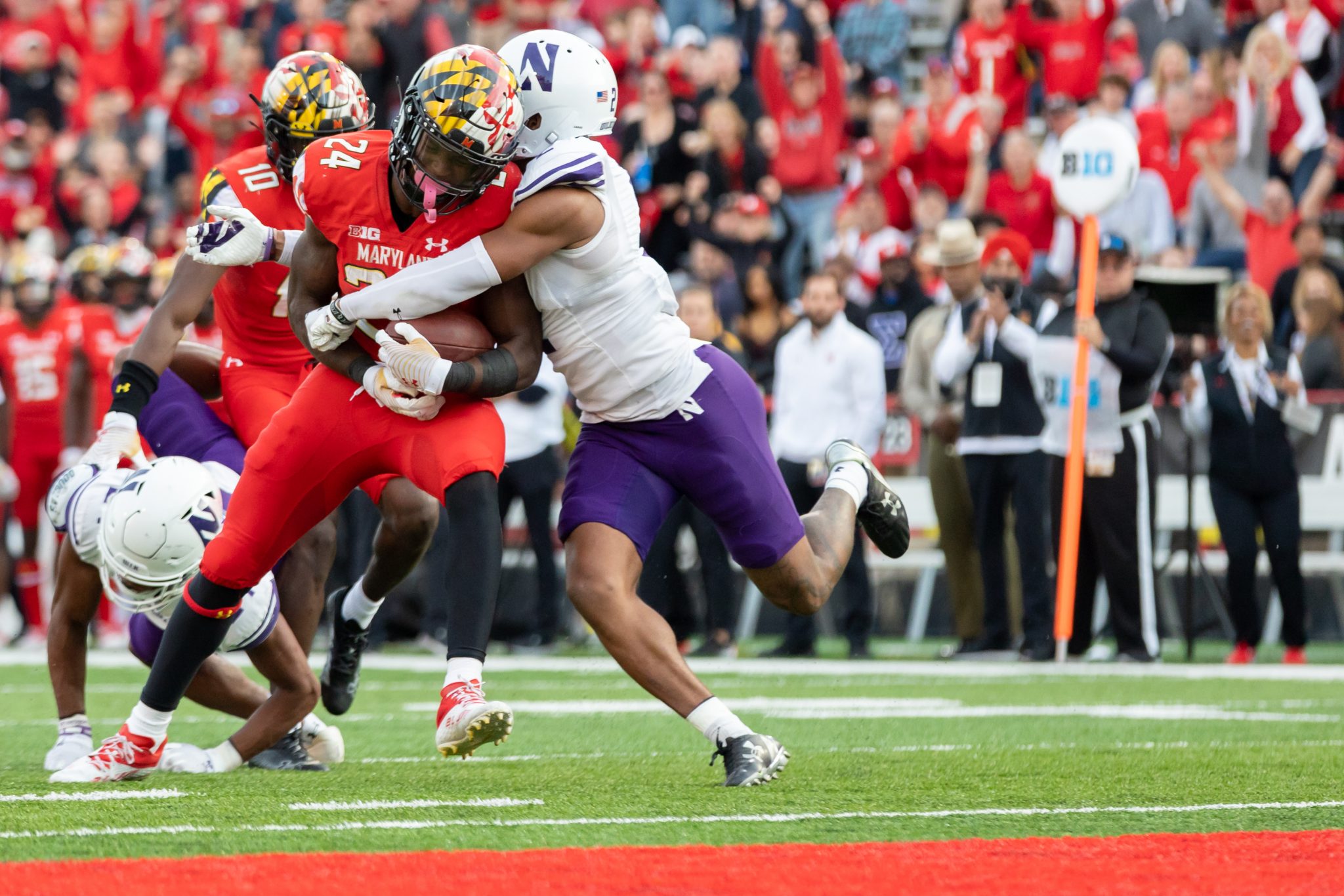 Roman Hemby breaks a tackle for a touchdown during Maryland football's 31-24 win over Northwestern on Oct. 22, 2022. (Cam Andrews/The Diamondback)

Maryland football’s win over Northwestern secured its sixth victory and a bowl berth, the earliest it’s done so since 2001. The Terps’ have now reached the six-win mark in back-to-back seasons, but the two campaigns have drastically different feelings.

The Terps only met that threshold in the last game of the regular season a year ago, a crowning achievement that sent the program to its first postseason game in the Mike Locksley era.

They have now already met that goal in late October despite a slew of injuries — an achievement they’re proud of. But the players are displaying a reserved pride, indicating this program no longer treats meeting bowl eligibility as the last step of a journey, but rather the first.

“As this program is built, we’re trying to get bigger and better,” safety Dante Trader. Jr. said. “We’re looking forward to getting more wins … Last year was getting over the hump, this year, keep going up that ladder, keep stacking.”

Trader sparked the comeback win by nabbing a key interception in the third quarter with Maryland down 10. The safety was one of the few starters who played on the Terps’ defense, a unit decimated by injuries.

But the defense held for large parts of the game, only giving up seven second half points. The performance indicates the depth Locksley has been able to add through successive recruiting classes, with veterans who have long been with the Terps such as Ahmad McCullough.

“[Locksley] recruits well so if somebody goes down, we’re able to bring somebody in … [and] not have a drop off,” Trader said.

The biggest absence for Maryland came at quarterback, where Taulia Tagovailoa missed his first game of the season with a reaggravation of a previously suffered MCL sprain. While Tagovailoa practiced during the week, backup quarterback Billy Edwards Jr. learned Wednesday he would make his first career start against the Wildcats.

Edwards, a redshirt freshman, stood with his back to the student section as Maryland announced its starters and felt their cheers pounding into it. The environment reinforced the Northern Virginia product’s decision to return close to home, he said.

The excitement he felt showed in his play. Edwards admitted he felt shaky on the Terps’ first drive, one that ended when he missed Dontay Demus Jr. on third down. But he improved from there, ultimately helping Maryland score 27 or more points for the 10th straight game — the longest active streak in the Big Ten.

His job became much easier with the help of running back Roman Hemby, who exploded for 179 rushing yards and three touchdowns. His final score came with just three and a half minutes remaining, a 75-yard scamper that ensured the Terps will play a 13th game.

“It wasn’t pretty,” Hemby said. “But down the stretch when we needed a big play, we were able to get it done.”

A testament to the higher standards Locksley has set, it’s the first step in a larger journey for the players.

“The fact that we’re bowl eligible, you’re starting to see the fruits of the work we’ve put into develop this type of culture really come to fruition,” Locksley said Tuesday.