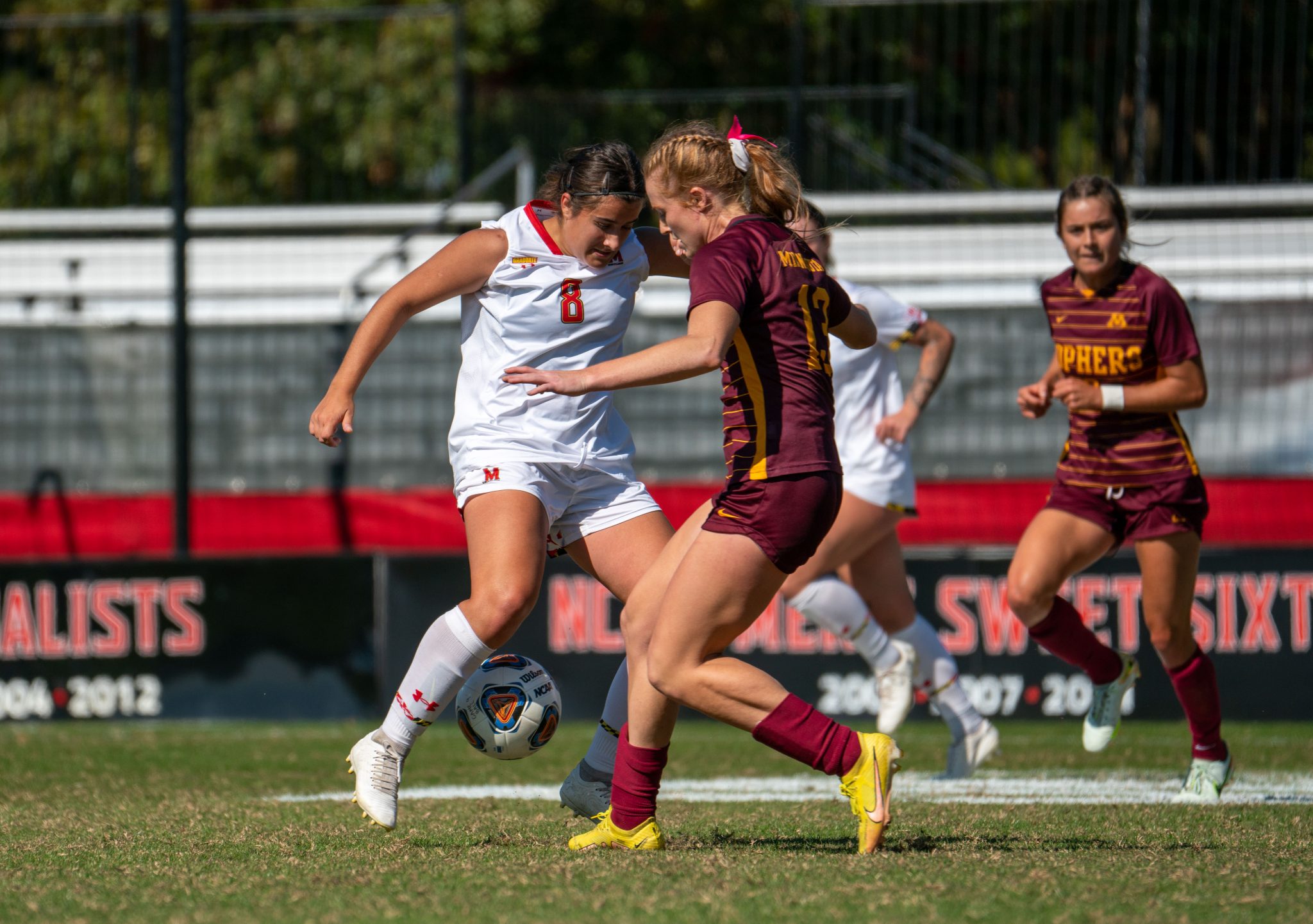 Juliana Lynch threaded an effort beyond the Minnesota backline to find the run of Alyssa Poarch. Poarch was able to reach the ball just before the chance went to waste for the Terps, sneaking a powerful effort beyond the near post.

Big Ten goalkeeper of the week Megan Plaschko was unable to keep Maryland shot out as the ball reached the back of the net to knot the game at one goal apiece in the first half.

“I’m glad I got to end off with a bang and leave my mark,” Poarch said on her last game at Ludwig Field.

But the Terps couldn’t capitalize on Poarch’s momentum-shifting goal as the game progressed. Despite the life Poarch’s goal gave the Terps, Maryland fell 2-1 to Minnesota in its last game at Ludwig Field in the 2022 season.

Head coach Meghan Ryan Nemzer opted for a few changes leading into Sunday’s afternoon matchup with the Golden Gophers. Malikae Dayes returned from a one-game suspension, reclaiming her spot in the Maryland backline. Freshman Ava Morales started in midfield while Catherine DeRosa started on the bench for the second time this season.

Madeline Smith also returned to goal after starting on the bench in the team’s 7-0 loss to Ohio State.

Minnesota’s offense made its presence felt quickly. Ten minutes into the first half, the Golden Gophers were able to score the opening goal of the match with just their first attempt after a high-lofted cross from the wing by Megan Gray was met with a volley by Sophia Romine.

The Maryland backline did well to recover after Minnesota’s opener, allowing the Golden Gophers just two more opportunities toward goal to end the half. Nearly halfway through the opening period, Poarch gave Maryland a crucial equalizer to bring the Terps back into the game.

“I thought that this was the first time in a while we had a backline that was healthy. I feel like for the last five, six games we’ve sort of been putting pieces together,” Nemzer said

The goal was the first Maryland has been able to score in the month of October, and the first goal for the Terps at home since the 3-2 defeat to Illinois on Sept. 22.

The second deadlock of the game didn’t last long between the teams. After a foul gave Minnesota a freekick in Maryland’s half with less than a minute left in the half, Khyah Harper aimed the dead ball toward the far post and found an unmarked Gabbie Cesarone.

The Golden Gopher defender punished Maryland for poor set piece defending with a headed effort into the ground to give Minnesota its second goal — giving the Golden Gophers another one-goal lead.

The goal marked Cesarone’s fourth tally of the season. The reigning Big Ten defender of the week was ranked 34th nationally for game-winning goals heading into the game.

The Terps went into halftime with the momentum swinging against them despite both teams being matched by the finest of margins. Minnesota racked up three total efforts with just two falling on target. Maryland created two opportunities, with both on goal.

Neither goalkeeper had much action. Smith didn’t get her first save until the second half while Plaschko only had one save in the opening half.

Neither team was able to create separation in the second half — there was only one opportunity between the two teams in the frame. The effort came in the 51st minute when Minnesota tried to redirect a set-piece effort across the box, but Smith was quick off her line to claim the ball and dissipate any threat from the Golden Gophers.

“I think both teams recognize how much this game meant. I think a lot of it was played in the middle of the park,” Nemzer said on the stagnant second half offense.

“It was two teams that were fighting hard.”

Minnesota was able to keep Maryland scoreless in the second half to clinch the win.